Every day I learn something that I had no idea I didn’t know.

It has long been whispered, in dark corners of the industry, that our reflected light meters aren’t telling us what we think they’re telling us. I’ve recently stumbled upon some evidence that states that this is, indeed, true. I don’t have a definitive answer yet, but you might be interested in knowing what the definitive question is… 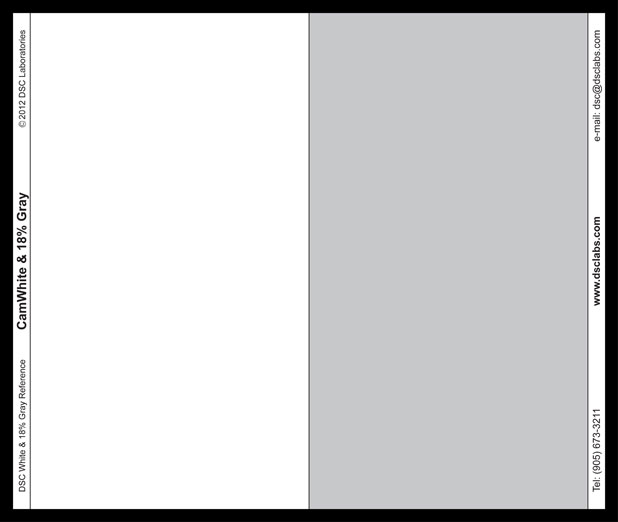 The back of the DSC Labs OneShot chart, with a perfect 18% gray target on the right side.

I was recently discussing the value of incident verses reflected meters when shooting HD with a light meter manufacturing rep. One of the topics that came up was the fact that reflected light meters are calibrated to a standard, ISO 2720-1974, that specifies a reflected light value of approximately 12%. Now, if you’re like me you were taught that photography’s magic reflectance number was 18%, because a surface that reflects only 18% of the light striking it appears to be a neutral gray that is perceptually half way between 90% white and 4% black (which is the range of brightnesses that we see from objects that are flat lit). Whenever I use my spot meter I assume that it is telling me exposure information that will make the object I’m measuring appear to be of 18% reflectance, and then I adjust my exposure from there to make that object the proper brightness.

Most of my meters are calibrated by Quality Light Metric in Los Angeles, who—for probably 30 years—has been the gold standard for light meter calibration in Hollywood. (I’d link to their website but they don’t have one. They’re very old school. Their phone number is (323) 467-2265.) They make a big deal out of ensuring that an 18% gray surface that is measured with a reflected meter will match the same surface measured with an incident meter. Spot meters and reflected meters rarely match, especially the two-in-one models; for example, my Sekonic meters, out of the box, differ by a half stop. Guess how much difference there is between 12% gray and 18% gray?

About a half a stop, plus or minus a touch.

I’d heard rumors that some manufacturers calibrate their spot meters for 12% gray, and others for 14%—but no one hit 18% dead on. In fact, it’s apparently impossible to buy a reflected light meter that will measure 18% reflectance properly. You must have it specially calibrated to do so.

I like to learn about things that I didn’t know I didn’t know. This counts for a big “didn’t know.” And so far, what I’ve found via the web is quite surprising.

First, there’s this paper. In it, the ISO 2720-1974 standard for light meter calibration is quoted as saying:

“The constants K and C shall be chosen by statistical analysis of the results of a large number of tests carried out to determine the acceptability to a large number of observers, of a number of photographs, for which the exposure was known, obtained under various conditions of subject manner and over a range of luminances.”

K is a constant used for calibrating reflected meters, and C is a constant used for calibrating incident meters. If you want to take a look at the math behind them, please do; I’m not going to go there because I suck at math and instead try to focus on gaining an intuitive knowledge of what the math means. The bottom line, though, is that the allowable range of the K constant, for reflective meters, doesn’t result in a reflective value of 18%. Instead we’re looking at 12%-16%.

The thing that struck me is that 1974 was quite a while ago, and I don’t believe that 1° spot meters were terribly common back then. Most reflected meters of that time viewed quite a large area, often 25-30° or more, and really did average the brightness values of an entire frame, whereas today we use 1° spot meters to read very specific object in a frame.

Here’s an example of a wide-angle reflected meter. I owned one of these when I was a teen. I aimed it in the general direction of my shot and read off an exposure value. If I wanted a bit more of an idea of what I was measuring, I’d calculate exposure by aiming it at my hand, lit by the same light as the scene, and open up one stop. Most of the time that worked really well… but that’s as precise as that meter got.

The quote above, about statistical analysis involving a large number of both photographs and observers, seems to dispel the myth that spot meters are calibrated to a perceptually-uniform standard that sits in the middle of a perfect gray scale. Instead it appears exposure is weighted based on the perceptions of an unknown number of observers looking at a bunch of photographs that were most likely exposed using a wide-angle light meter 40 years ago.

The paper above also discusses what happens when one uses a wide-angle meter to expose a surface that is textured with white and black squares. On page 3 the author shows that light areas may dominate wide-angle reflected measurements of surfaces with equal amounts of extreme highlight and shadow, resulting in an average exposure that makes the highlights appear dull. This is where the K constant comes into play: wide-angle readings that average large areas tend to result in slight perceptual underexposure, so fudging the exposure with a constant based on statistical analysis of observers seems to make sense.

It’s just not common knowledge. And that’s a problem.

The Wikipedia entry on light meters repeats the quote from ISO 2720 regarding the use of statistical analysis to develop a “fudge factor” that manufacturers can employ to create what they consider are more pleasant exposure results while still remaining with specification.

I’m chatting further with several different people about this issue, and I hope to have some sort of answer in a week or two. Meanwhile, it’s fascinating that our modern meters may be calibrated for an exposure value that is (1) different to what we expect, and (2) based on 40-year-old tests exposed using reflected meters that no one has used in a couple of decades.

Note: I have no connection to Quality Light Metric, other than that I use their services and pay full price. I have worked as a paid consultant to DSC Labs.