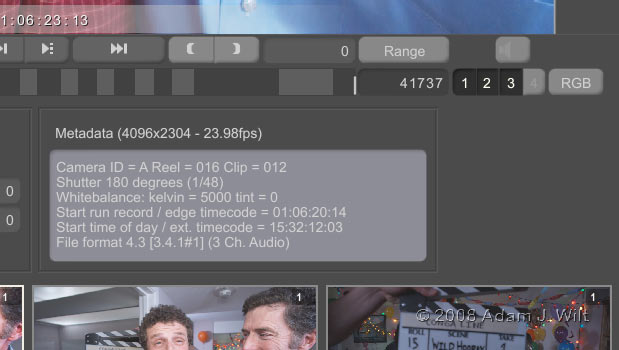 • REDCine 3.1.8 was released today; it exports QuickTimes with audio. To the right of the timeline there are now four buttons, one for each track the R1 can record; buttons are enabled for any track used in any of your loaded clips, and pressing a track button outputs the corresponding track as a 32-bit, 48 kHz mono track in your QuickTime exports.

There’s also a little speaker button above the track selectors, but I haven’t yet figured out how to enable it; presumably it’ll let one hear the audio in REDCine.

As is sometimes the case with REDCine updates, things may not work as expected if you install atop an existing copy; I had to delete REDCine preferences in /Library/Redcine before REDCine would let me export anything other than a TIFF—but even deleting and reinstalling everything didn’t enable the speaker button.

• “That’s not a widescreen, THIS is a widescreen…” Check out this article on TV Technology: Philips is showing a “Cinema 21:9” LCD TV— a 2.33:1 aspect ratio. The idea is that ‘scope films can be watched almost fullscreen, with minimal letterboxing. Of course, it also means that “pillarboxing” can be enjoyed on 16:9 content, just as 4:3 is pillarboxed on 16:9 screens. Now, every day can be an awkward my-TV-show-doesn’t-fit-my-TV-screen kind of day!

Yeah, the article is in the Apple channel: a “vendor blog”. But that doesn’t mean I’m just parroting what our fruit-themed overlords have told me to say (while some of us at PVC were involved in a conference call with Apple’s Ministry of Truth, the Ministers emphasized that they want real end-user reports on how things actually work, as opposed to a repetition of any happy-happy joy-joy marketing blurbs). As I normally work with Final Cut Studio, and as I’m using the RED ONE in my day job, it’s natural that I’ll have some stuff to say about the combination of the two products.

What you won’t find in my Apple-channel articles is any detailed discussion of non-Apple tools beyond what’s necessary for context; I’ll keep those postings over here in “Camera Log”. But you also won’t find any brain-addled fanboyism (though some would say that simply by using FCP I’ve succumbed already) or any reporting through rose-tinted glasses (certainly not; rose-colored glasses interfere with color grading). If it works, I’ll say it; if it doesn’t work, I’ll say it also. The focus, as they say, is on Final Cut, but beyond that I’ll try to maintain the same level of objectivity I do over here. This is an opening to post comments deriding my level of objectivity. Hey, I can remain objective, it’s not like Apple is giving me Steve Jobs’s jet or anything. They just said I could fly it once in a while… (Joke. Seriously, I can’t afford to keep the dang thing topped up with Jet A at KSJC’s $5.04/gal prices, not with the burn rate on that puppy… )