Digital Juice® announced today that it is releasing ready2go™ Projects & Templates for Adobe After Effects® Collection 21. ready2go projects contain animated template graphics that provide After Effects users with a variety of professional finished looks, and feature expertly designed “drop zones” for text and video. This new collection in the ready2go library is available for purchase as either an instant download or as a boxed DVD product. The designs in this collection are multipurpose in nature, making them perfect for a wide range of projects from wedding videos, business presentations and network show promos to broadcast television commercial spots, sports highlights reels and training material. 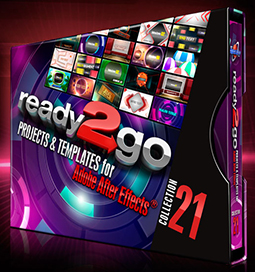 “These ready2go projects are supremely customizable templates for After Effects,” says David Hebel, CEO of Digital Juice. “They give you a finished look with the addition of just your own text and video – and they are still even more customizable if you need them to be.” No matter what your level of skill in After Effects, ready2go scales with you. One of the things that sets ready2go Projects & Templates apart from what other content providers produce is that Digital Juice includes multiple ‘edit friendly’ segments with each project. “After Effects artists can build their own version of the project by placing an infinite series of edit-friendly text and video segments on their timeline to create the desired length and sequence,” says Hebel. “Each segment is also extendable up to 15 seconds and includes matching wipes and sound effects to help you transition between segments smoothly.”

In ready2go™ Projects & Templates for Adobe After Effects® Collection 21, you will find 102 unique project files ranging from an ethereal view of a planetary system, to a tropical beach with colorful hot-air balloons, to an animating patchwork of sliding film strips – to name just a few of the many creative looks in this package. “We provide you with the variety you need to stay on the cutting-edge of style and to handle any type of production that comes along,” says Hebel. “Replacing footage and editing text is very easy even for a beginner. Plus, depending on your comfort level with After Effects, you can literally change every aspect of the look and feel from timing and coloring to backgrounds, transitions and fonts used.”

Browse, Search & Select
Digital Juice® provides a free Windows® and Mac® utility, Juicer™ 3, that makes it easy to browse, search, and select from any of the ready2go™ Projects & Templates for After Effects collections. Once a project is selected the user has the ability to set the resolution and then collect and send all or select project elements to After Effects®. In addition, since each After Effects project is made up of numerous QuickTime animations, the Juicer 3 technology gives users the flexibility to export the animations independently so they can be used in conjunction with any other project they might be working on.

Pricing & Availability
The new ready2go™ Projects & Templates for After Effects Collection 21 can be ordered through Digital Juice’s online store at www.digitaljuice.com. The package’s retail price is $249.95 but it can often be purchased in special promotions for as much as 50% off. Check the website for details on specials. The company’s free Juicer™ 3 software can be found at www.digitaljuice.com/juicer/