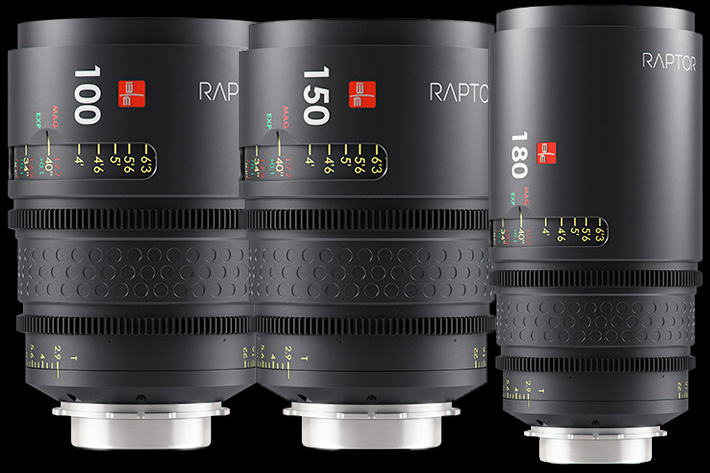 Presented at IBC 2016, in Amsterdam, the Raptor prime lenses from German manufacturer IB/E Optics were introduced at Band Pro’s annual One World Open House event, and are now available for rent.

IB/E Optics believes that the future is in large format sensors, of which early examples include RED Weapon 6K and 8K, Sony A7 or ARRI´s new ALEXA65. Larger sensors deliver the film-look and an interesting bokeh due to their very shallow depth of field. These new cameras require lenses that can cover the larger sensor sizes. That’s where the Raptor lens family enters, offering a new macro family consisting of 3 focal lengths 100 mm, 150 mm and 180 mm initially.

Now the Raptor lenses are available in Hollywood with the first set being presented to Imagecraft Productions last Thursday at Band Pro’s annual One World Open House event. These new macro prime lenses from German manufacturer IB/E Optics have started delivering worldwide, and are now available for rent in Hollywood for the first time.

Imagecraft Productions President Jason Been remarked: “Imagecraft is really excited to add these lenses to our rental inventory. Raptors have an array of applications from producing beautiful interviews to finite detailed television/commercial imaging. We can’t wait to see what our clients do with them.”

The Raptor lenses feature full frame (24×36) coverage, 1:1 magnification, consistent T-Stop T 2.9 at all focal lengths, as well as robust and durable professional cine mechanics. Thanks to internal focusing there is no change in length. Offering extended color correction (APO), consistent distance from flange to iris- and focusring, a consistent front diameter of 95 mm, the lenses use m0.8 gear wheels for focus and iris and feature a UMS PL Mount (Nikon F, Canon EF, Sony NEX E, …).