Panasonic shows off a prototype AG-AF100 at Birns & Sawyer 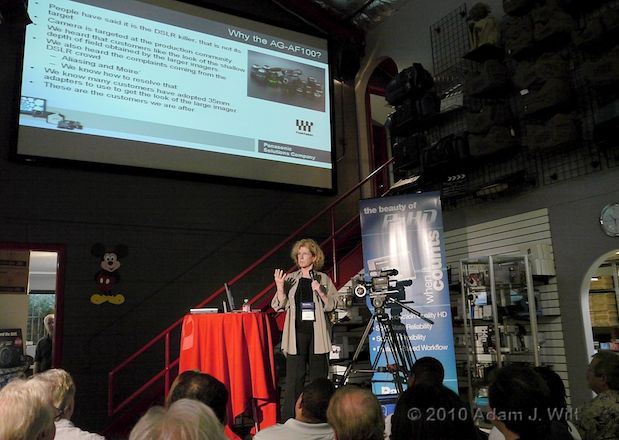 Thursday, 4 November 2010: Panasonic’s Jan Crittenden Livingston appeared at Hollywood rental and sales facility Birns & Sawyer to show off a prototype AG-AF100 Micro Four Thirds cine-style camcorder. I was in town for the Createasphere 3D Workshop, so I stopped by for a look. Herewith, my notes and observations.

The AG-AF100 is a single-sensor handheld camera with interchangeable lenses. It’s based on the Micro Four Thirds (MFT) format, using a bayonet-style lens mount with a ~20mm flange depth in front of an 10.6×18.8mm CMOS sensor—roughly 80% the size of a 35mm motion picture film frame (the flip side is that a film lens on the AF100 will seem about 25% “more telephoto”; a 50mm on the AF100 will have roughly the same angle of view as a 60mm or 65mm on a film camera). Some say the AF-100 will be the “DSLR Killer” for video applications; Panasonic qualifies this as a “DSLR killer for serious uses”. The body alone is (or will be) $4995, so it’s not for the $2500 DSLR crowd. 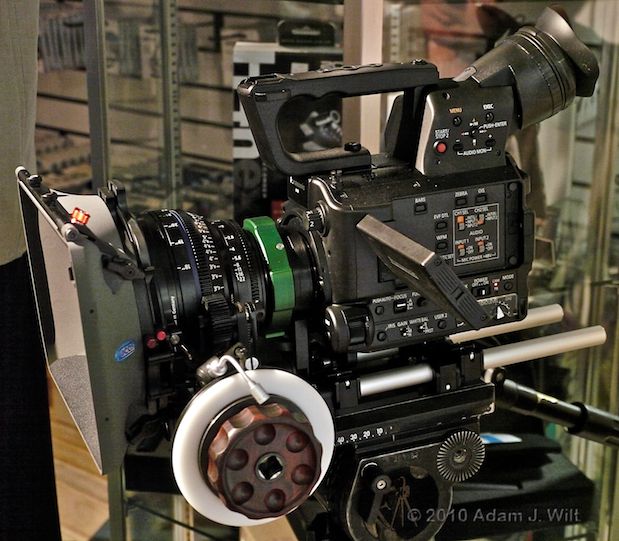 The AF100 will show no moir©, no color shimmering or aliasing. Its anti-aliasing / optical low-pass filter is optimized for 1080p and 720p (when Jan brought the AF100 to the 3D workshop and had it hooked up to a 25″ display, the images looked smooth, natural, unaliased, and very clean).

Its CMOS sensor is “best in class” with fast scanning for minimal skew. Yes, it showed some jellocam on fast motion, but it took some pretty severe whip-panning to make it at all noticeable.

The shallow flange depth (MFT is a “mirrorless” or “live view” format in still cameras, so there isn’t the need for a deep mirror box behind the lens as on reflex cameras) allows just about any lens other than C-mount lenses to be attached with an adapter (the demo camera had Illya Friedman’s Hot Rod Cameras PL-mount adapter on it with a Zeiss 50mm Compact Prime CP.2 lens and a Cinetech follow-focus). Jan had a Novoflex Nikon F to MTF adapter with her, and she said a Birger EOS adapter (with, presumably, electronic aperture control for Canon’s lenses) may be available by the end of the year. 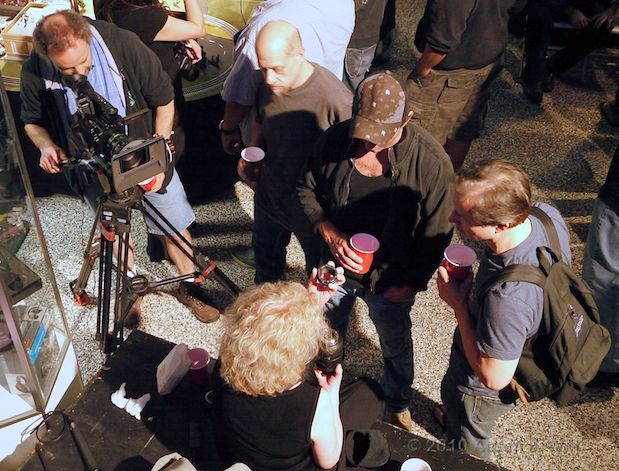 The PL-mount adapter will be about $1200 when it ships; the prototype on this camera is the first one with a support mechanism specifically for the AF100. 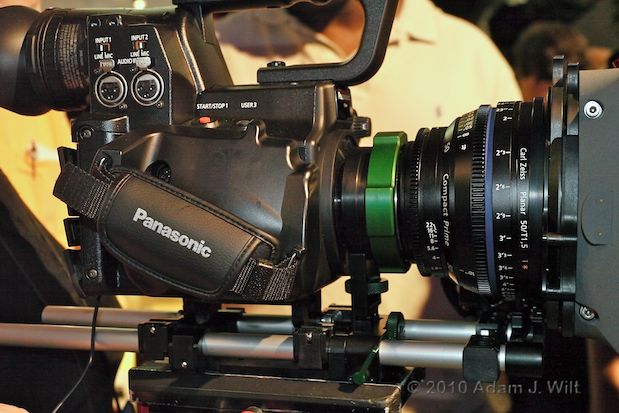 With Panasonic’s own 14-140mm f4-f5.8 MFT zoom (the one sold with DMC-GH1 still camera) the AF100 will have optical image stabilization and face tracking: if the camera recognizes a face, you can have it track that face in a scene and lock focus and exposure to it.

The camera has slow shutters down to 1/2″. It will grab stills at HD resolution while live, while shooting video, or when playing back. Still are always in HD resolution: remember, the AA/OLPF is optimized for HD resolution; larger pix would look soft.

Six scene files will be present. They aren’t named yet but figure on HPX170-like options: HD norm, SD norm, B. Press, etc. 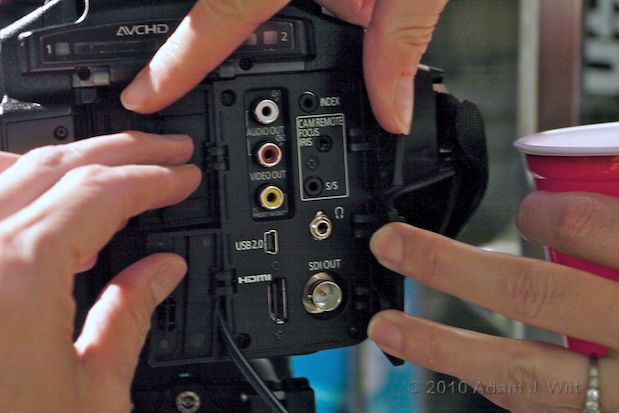 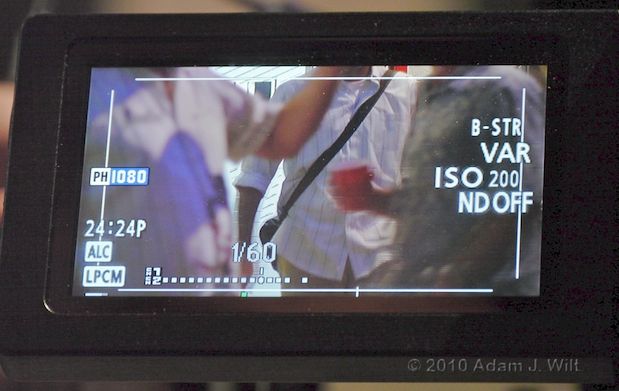 LCD readouts: more elegant typography than we’re used to on a Panasonic.

You will be able to jam-sync timecode on the composite video in (presumably the composite out from the camera includes VITC, though I didn’t ask at the time; otherwise, how would this work?). Four-position ND filter wheel with 0/2/4/6 stops of ND; white balance variable in 100 degree from 2400 K to 9900 K. Dynamic Range Stretch in all frame rates, all modes (not for all shots, only contrasty scenes; Jan warns against using it otherwise). Three levels of DRS plus off. 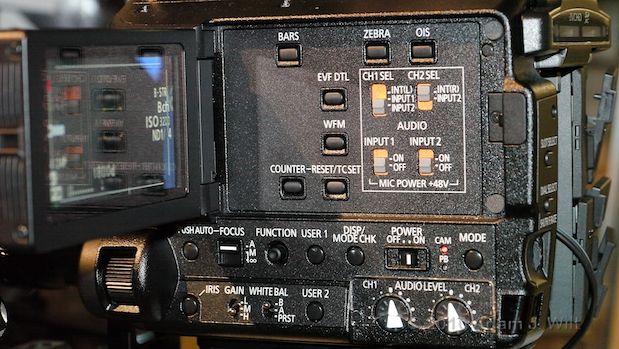 There is no start/stop button, or zoom rocker, on the handgrip! Start/stop is on the right side top plate, where your forefinger will fall; another is on the left of the EVF tower. 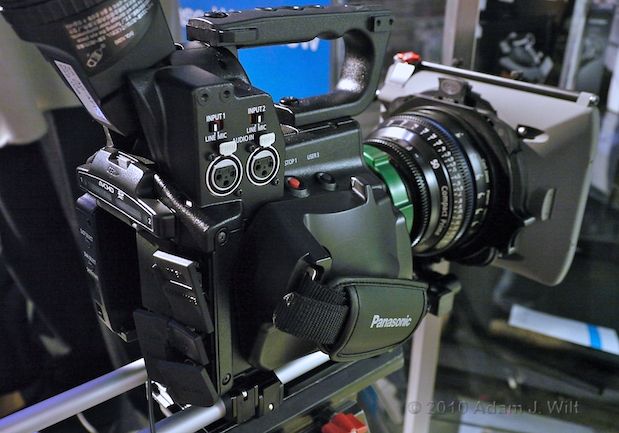 Handgrip is removable with two bolts, as is the top handle. 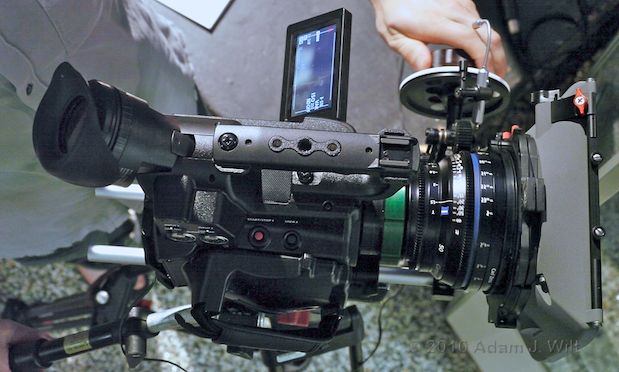 There’s a smart battery interface with time remaining indicated in the finder (hooray!). You should get up to 4 hours on one 5400mAH battery (same battery form factor as on DVX, HVX, HPX series cameras).

Accessories: “if you could do it on a film camera, you can do it on this camera.”

Compression: AVCHD, a content-adaptive codec, with different block sizes from 4×4 to 16×16. The more B-Frames, the better (in an IBBPBBP-type GOP structure); DSLRS are IP only, “and I don’t care what their bitrates are, they’ll never look as good”. GOP length is 15 frames. 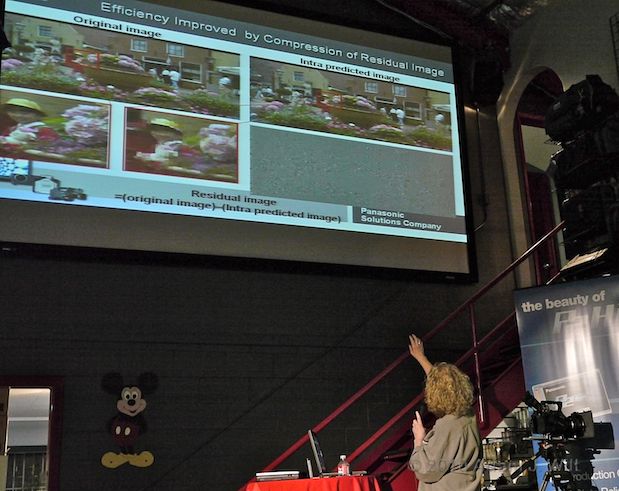 All praise be unto the codec: Jan explains AVCHD.

Native ISO is not officially established yet, though it seems to be roughly around 320, with 10 stops dynamic range. ISO range selectable in the camera will be 200-3200.

Don’t take as gospel any AF100 sample clips you see online. The codec isn’t finalized yet, and according to Jan there weren’t supposed to be any cameras handed out to third parties yet for any sort of video-quality evaluation. 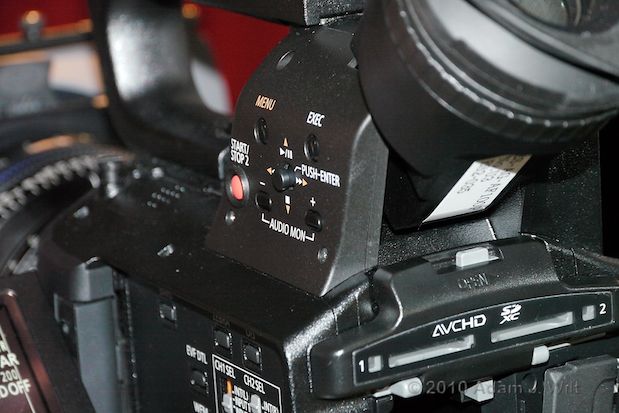 Sensor native resolution is unspecified as yet. It’s not the GH2 chipset, and “not even in the same ballpark” as the GH1 chipset.

The body weighs only 2.2 pounds. I pulled the thing off the tripod and handheld it; with the 50mm CP.2 lens and Cinetech FF it was front-heavy, but not much worse overall than an HVX200 or an EX1. IMHO the handycam form factor isn’t ideal for a camera of this size and weight, but I was pleased to see that it was at least somewhat usable. Moving the start/stop trigger off the back of the thumb-rest portion of the grip actually made it easier to hold, as I could really get a “thumb lock” on the thing and stabilize it better.

The cameras are supposed to start shipping in late December (not in time for Christmas, though!). Panasonic is already back-ordered a couple of months (but Jan says that’s her backlog; that doesn’t really indicate how many cameras the dealers will have available, and it may be better or worse at the retail level). Jan said she’ll see about getting me a finalized prototype—one with production firmware that I can test as a valid example of how the shipping cameras will perform—for a few days in late November or early December. If that happens, you’ll read about it here. Stay tuned…

FTC Disclaimer: No material connection exists between me and Panasonic and/or Birns & Sawyer, except as a customer. No payments or other considerations were offered for writing this article. I did, however, partake of perhaps a dozen cubes of cheese, several carrot sticks, and half a plastic cup of wine at Birns & Sawyer’s follow-on party.

The figure of Mickey Mouse appearing on the wall at Birns & Sawyer is copyrighted and trademarked by the Walt Disney Company. Mr. Mouse appears in these photographs purely incidentally, and his presence here is not intended as support, endorsement, or commentary on the subject at hand.