Two stories of note from this past week:

Canon's C100 Large-Single-Sensor AVCHD Cine Camera will be upgradable to dual-pixel phase-detection autofocus, similar to that used on the EOS 70D DSLR… but better. 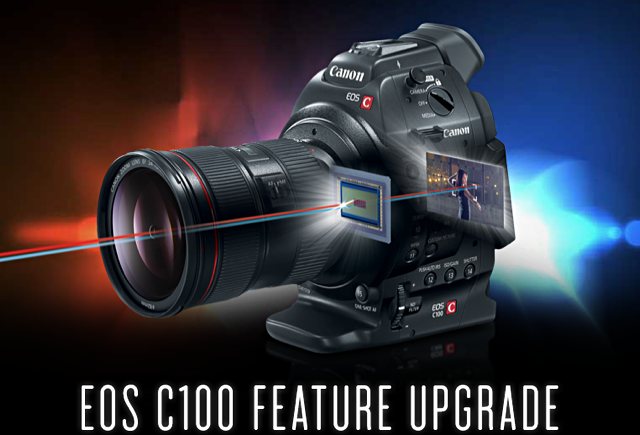 Canon's update should improve AF considerably. Note that in real life, the whole dual-laser-beam thing, with the glowing sensor, the see-through camera body, and the J.J. Abrams-style flares, may not exactly correspond to the experience shown in this Canon marketing image (from usa.canon.com/cusa/professional/standard_display/eos_c100_feature_upgrade).

Most video and mirrorless cameras use contrast-detection autofocus: they look for sharpness in the image (or in a targeted area within the image), and adjust the focus slightly to see if things get sharper. If so, they continue; if not, they try focusing in the other direction. The only thing the camera can see is whether or not the image is sharp; they can't tell which way to focus, or how far. The contrast they're looking for is a contrasty transition between adjacent pixels: sharp edges generate lots of high-contrast transitions, while out-of-focus images vary brightness more gradually across pixels.

As a result, contrast-detection AF is characterized by constant, low-level focus hunting (though the better systems, once they find focus, will simply stop focusing until the detected sharpness changes significantly), comparatively slow focusing, and a 50% chance that any initial focus change will be in the wrong direction.

Most SLRs and DSLRs use phase-detection AF. Phase-detection AF normally uses dedicated, secondary sensors that essentially look at a pair of offset, superimposed images, like a rangefinder camera's viewfinder does (there's a good description on Wikipedia). Phase-detection AF systems can tell not only if focus is off, but by how much it's off, and (within limits) which direction and how far to drive the lens into focus.

Canon's 70D DSLR, announced in July of this year, offers phase-detection AF using a “dual pixel” CMOS sensor. It's the first camera to perform phase detection on the main imager, even while recording. Last week, Canon announced an upgrade for the C100 LSS cine camera, giving it dual-pixel, on-sensor phase-detection AF for the same swift, sure, no-hunting AF as the 70D and other DSLRs. Furthermore, they supplement phase-detection AF with contrast detection AF, so that the phase-detection mechanism won't drive a severely out-of-focus lens in the wrong direction all the way to the endstop: the decreasing contrast will tell the system to reverse direction pronto.

This is Big News; it'll make the C100 much more usable for one-man run 'n' gun operations, as well as adding another handy tool to a 1st AC's bag of tricks. A no-hunting, focusing-in-the-right-direction AF system has always been something of a holy grail for videographers, and Canon may have found it.

Now, it's not all beer 'n' skittles, it won't solve every focus problem. The C100's phase-detection AF will use a fixed, central area of the image – only 20% vertically, 25% horizontally – so you need to to be aiming pretty much directly at your subject for it to work (the 70D's phase-detection area is 80% of the sensor in both directions, much more rule-of-thirds friendly). It's also unclear if you'll be able to control the focusing rate of change (sometimes you want a quick snap, other times a gradual pull). So don't fire your 1st AC just yet.

The upgrade requires sending the C100 back to Canon, and it'll cost US$500 (at least in the USA). The upgrade is scheduled to be available in February 2014.

What about the C300 or C500? Canon's Larry Thorpe has confirmed that “the 4K image sensor is precisely the same in all three C500/300/100 cameras. Accordingly, they all have the twin photodiode technology.” But there's more involved than the sensor alone; he cautions: “only Canon Japan can confirm whether they (a) Can, and (b) Will —- implement the new AF in the other two cameras.” We'll just have to wait and see.

The folks over at Blackmagic Design's DaVinci division have released Resolve 10, a major upgrade to this, um, well, “Color Corrector” doesn't quite seem to cover it these days. With enhanced multitrack editing including ripple/roll/slip/slide and 16 track of audio (audio! In a color grading program!); a title tool with lower thirds, scrolls, and crawls; and direct output to DCP (Digital Cinema Packages); Resolve is becoming an all-'round finishing tool. Oh, yeah, it remains a powerful grading program.

Alexis Van Hurkman has a 36-minute “new features” video on the BMD Resolve page (linked above), and discusses some late-breaking new features on his blog. I just want to touch on one new aspect of Resolve 10 Lite, still at the ever-popular price of Free: 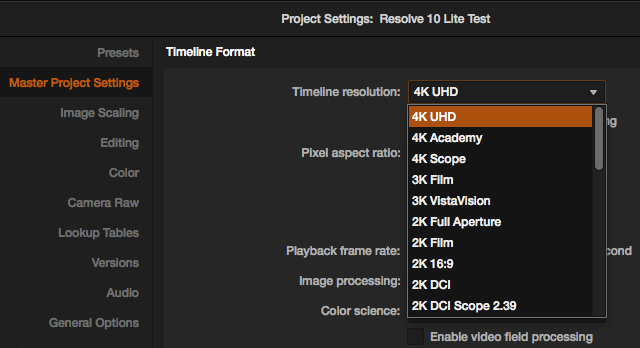 (Installing Resolve 10 will overwrite your Resolve 9 application and upgrade your database. I don't know if you can roll back, all I know is that I haven't had to try. In my limited testing so far, all my Resolve 9 projects survived the upgrade on both Mac and Windows systems, but I stress the limited bit; my projects are very simple.)

Disclosure: A week before Resolve 10's release, I found an obscure bug in the way Resolve decoded Cineform Raw files. I'm probably the only person exploiting a particular feature of the Cineform Raw encoder; it's not something normal people would run into (it has to do with image-stabilization software for the Kinetta Archival Film Scanner; more than that I'm not at liberty to say). Nonetheless, I reported it to the DaVinci folks, they responded right away, and they fixed it before release. Awesome! Blackmagic Design also loaned me a full version of Resolve 9 for my Sony FS700 in the Raw review, and they're sending me a Cine Camera and Pocket Cine Camera for review this month; the Cine Camera arrived today. So I may be more favorably disposed to report on Resolve than the average bloke, though I believe my comments are not especially biased. That aside, neither Canon for Blackmagic Design is offering any compensation or other inducement for me to report on these developments. There is no material connection between me and Canon or Blackmagic Design.