Hindenburg Journalist Pro for macOS has replaced Soundflower with its own virtual audio device.

Frequent readers will recall that back in January 2018, I published an article called How to install/update Hindenburg Journalist (Pro) without Soundflower. At that time, I expressed my disappointment with Soundflower as audio middleware both to you (the readers) and to our friends at Hindenburg, and suggested the use of some paid alternatives which are much more reliable than Soundflower. Some middleware is required on macOS so that one audio app can send audio to the other, via a virtual audio device. Over three years later, Hindenburg has officially agreed with me and fortunately now includes its own virtual audio device software which is now installed with Hindenburg Journalist Pro on macOS. In fact, with the new Hindenburg installer or upgrader, there is even an option to uninstall Soundflower as part of the process, which is wonderful. Ahead I’ll cover who should use the new included Hindenburg virtual audio device and who should do something different. I’ll aso include an embedded video and add my comments.

What’s the purpose of these middleware apps/virtual audio devices?

The purpose is so that one audio app can send audio to another via a virtual audio device. This is often desirable when recording audio from a conferencing services like Cleanfeed Pro (my favorite), Apple FaceTime, Google Hangouts, Google Meet, Jitzi, Microsoft Teams, Microsoft Skype, Zoom.us and more.

The paid middleware apps I have recommended previously

In the past, the paid middleware apps I have recommended are Sound Siphon (the one I have been using for years), Audio Hijack 3.x or Loopback.

Who should use the new included Hindenburg virtual audio device?

Anyone who uses Hindenburg Journalist Pro on macOS and does not already own one of the paid middleware apps listed above (or finds the new included Hindenburg virtual audio device simpler to use) and does not use a RØDECaster Pro as part of the recording process when recording from conferencing services.

What if you use a RØDECaster Pro together with Hindenburg? 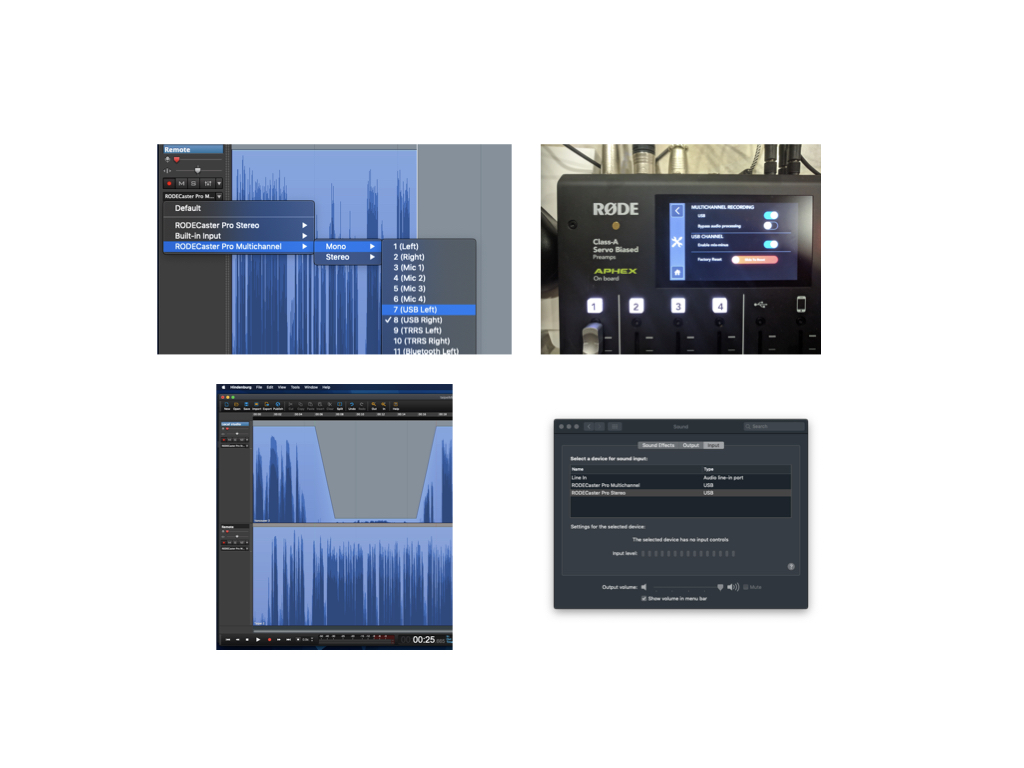 You will notice that this workflow requires no virtual audio devices at all, since the device (the RØDECaster Pro) is physical.

The only detail I will add to this wonderful explanation from Nick of Hindenburg is the following, since it may not be immediately obvious to beginners:

The above video shows how to send sound from the source app (Skype) into Hindenburg Journalist Pro’s track 1. This is great. However, I must clarify that track 1 in this explanation will only record the remote audio, not the local audio. To record the local audio, i.e. your local microphone(s), you must add that to one of the other recording tracks in Hindenburg Journalist Pro. Then you arm the required tracks before pressing record, and you make a multitrack recording, with all of its associated benefits.

Some of the other manufacturers listed above have contracted Tépper and/or TecnoTur LLC to carry out consulting and/or translations/localizations/transcreations. Many of the manufacturers listed above have sent Allan Tépper review units or NFR software, including Cleanfeed, Hindenburg and RØDE. So far, none of the manufacturers listed above is/are sponsors of the TecnoTur, BeyondPodcasting, CapicúaFM or TuSaludSecreta programs, although they are welcome to do so, and some are, may be (or may have been) sponsors of ProVideo Coalition magazine. Some links to third parties listed in this article and/or on this web page may indirectly benefit TecnoTur LLC via affiliate programs. Allan Tépper’s opinions are his own. Allan Tépper is not liable for misuse or misunderstanding of information he shares.