Lighter; stronger; more expensive – is it worth the trade-off? 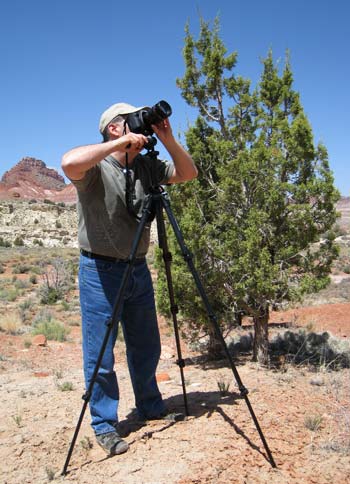 As I mentioned several months ago, I've been a quest to find a lighter-weight but still high-quality monopod/tripod and head combination to help offset my penchant for bringing along ever-heavier lenses while hiking. One obvious line of enquiry would be a carbon-fiber monopod or tripod.

Well, it so happens Manfrotto generously loaned me one of their 055CXPRO4 carbon fiber 4-section tripods to go along with the 327RC2 handle-grip ball head I reviewed earlier. I knew it would be lighter; what I didn't know is if it would be a stable as my normal aluminum sticks for studio work or heavier camera/lens combinations in the field. Assuming at least some of you might have the same questions in your mind as me, I wanted to share my results.

The Specs, In Context

The Manfrotto 055CXPRO4 carbon fiber plus magnesium Q90 4-section tripod weighs 3.75 pounds – roughly a 1-1.5 pound weight savings over aluminum 055 series tripods. Despite this, it can hold a camera plus lens combination of up to 17.64 pounds (for reference, a Canon 5D mkII plus 70-200mm 1:2.8 L IS II weighs 5.9 pounds), which is 2+ pounds higher than its aluminum brethren. It is just under 21.5″ long closed, 53.35″ extended with the center column down, and just under 67″ with everything extended. Rounded rubber feet are at the base of each leg (sorry; no hidden metal spikes like on their heftier 3221WN we still have). As expected, the head platform has the standard 3/8″ male screw plus bubble level; three screws underneath optionally provide additional friction. 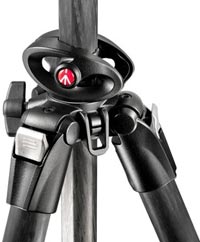 The legs have individual ratcheting locks that hold them at 23, 47, 66, or 89 degrees to vertical, allowing them to go essentially flat. The center column does not reside in a center tube, meaning that when it is up, you have additional ground clearance between the legs. If you raise it all the way and depress the spring-loaded release pin at its base, it can be lifted up and rotated down 90 degrees to extend horizontal, and then slide through the oval-shaped carrier seen in the image at right – thus, the “Q90” portion of the name. This versatility has me really kicking myself that I didn't bring it on an excursion to Horseshoe Bend earlier this year; as seen below, I couldn't quite get my body in a comfortable position to capture in the entire bend – but with this tripod and a remote shutter control, I could have safely hung the camera out over the precipice and got the shot. 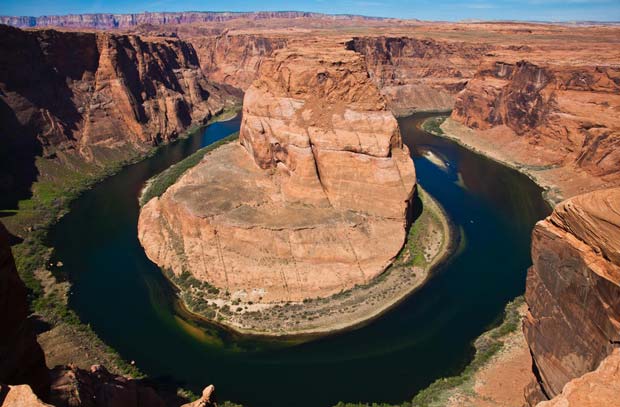 What Was I Worried About?

Any concerns I had about the strength of this tripod proved to be unfounded: It was very stable, both in the field and in the studio – indeed, much more so than lower-end metal tripods. The combination of these 055CXPRO4 sticks plus the 327RC2 head reviewed earlier provide a very nice combination of light weight plus tight feel. The other thing to keep in mind is that unlike aluminum, inherently stronger and stiffer carbon fiber does not bend, depriving you of the lovely experience of a leg that will no longer retract (I know some of you have been there).

The light weight was a real bonus not just for extended hiking distances, but also for when additional agility was required, such as stumbling around cactus and scrub brush in pitch-dark conditions. The only nit I have to pick – and it's a very small one – is a combination of lighter weight and increased friction of carbon fiber compared to aluminum means the leg sections don't willingly slide down under their own weight when you release their latches; you have to use a free hand to extend them, which adds a couple of second onto quick setups.

Such luxury does come at a price: The 055CXPRO4 has a street price in the $350-450 range; its three-section sibling runs $320-400. That's more than twice what you will pay for a comparable set of aluminum sticks (including Manfrotto 055-series aluminum tripods). But for a professional making money off of hiking miles into the back country or around a sporting venue for those hard-to-get shots, the reduced weight may well pay for itself in reduced chiropractor bills.