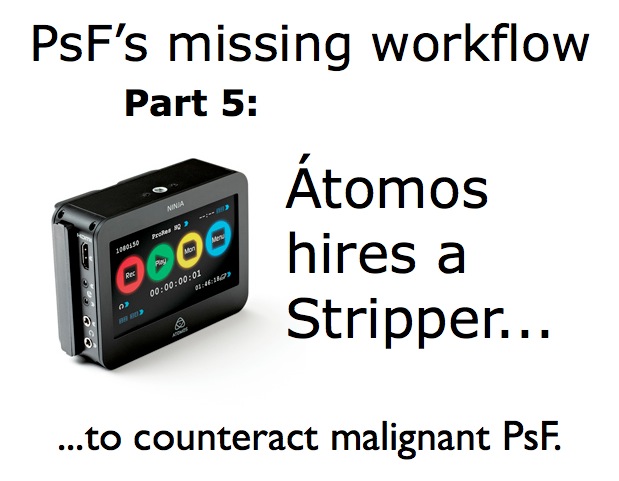 Problem to be solved

As I explained in Part 4 of this PsF’s missing workflow series, camera manufacturers so far are unfortunately delivering malignant PsF on their HDMI outputs. Although Sony’s NXCAM is outputting a special HDMI signal (see my recent article Untapped features in Sony NXCAM’s new HDMI output), to my knowledge so far no standalone file-based HD recorder yet recognizes Sony’s special flags. (As you’ll note in that article, Sony’s flags go beyond pulldown identification and also include timecode over HDMI.) Although several more expensive file-based HD recorders I covered in Part 4 have reverse telecine onboard (which eliminates pulldown and converts multiple framerates of PsF into pure progressive before compression), the US$999 Ninja from Átomos does not have this feature onboard, since it was designed either to record interlaced or pure progressive. The problem is that so far, no camera I’ve ever seen actually outputs native 23.976p, native 25p, or native 29.97p over HDMI. So when you record malignant 25PsF or malignant 29.97PsF, you are subject to all of the pitfalls and negative side effects I covered in Part 1 of this PsF’s missing workflow series. In addition to other software solutions I’ll be covering in future articles in this series, Átomos has just announced its own.

Continuing with the creative name policy already established with their Ninja and Samurai recorders, Átomos recently announced their Stripper 1.0, a piece of software that accepts the malignant PsF ProRes recordings made with their Ninja recorder and converts them to pure native progressive files. According to Átomos, their Stripper 1.0 will accept the PsF file and output the native progressive file of the matching framerate, so 23.976-over-59.94i will become pure 23.976p, 25PsF will become pure 25p, and 29.97PsF will become pure 29.97p. That way, the software editor will treat them as progressive, and the pitfalls and most of the negative side effects can be avoided.

As of publication time of this article, Átomos has not yet responded about the delivery date, price, or compatibility of their Stripper 1.0. When I say “compatibility”, it is not yet clear whether Stripper 1.0 will be for Mac or Windows, and whether Stripper 1.0 will work with any PsF ProRes file, or if somehow the ones recorded by their Ninja (or presumably even their Samurai, if the operator forgot to reverse telecine with that model) have some metadata to indicate that they were created by their own recorders, and therefore have designed Stripper 1.0 to reject other PsF ProRes files. I’ll update this when they respond. Upcoming articles in this series will also compare using Átomos’ Stripper versus other methods to achieve the same result.

Upcoming articles in this PsF’s missing workflow series will reveal the different workarounds with several software programs, and my conclusions about this situation. To be sure you don’t miss any articles, sign up for my mailing list here.