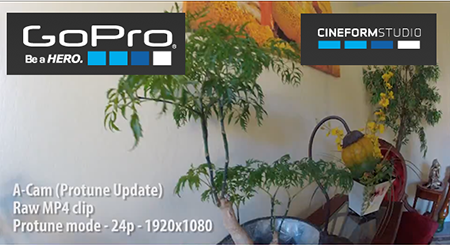 If you were at NAB this year, then you surely caught all the excitement over at the GoPro booth!

In addition to the long-awaited Wi-Fi BacPac & Remote released in August, the new CineForm studio with Protune was demoed and promises of more image control and better firmware support for the Hero2 cameras footage with our pro editing workflows.

According to their press release, the GoPro Protune firmware upgrade adds key features critical for high end film and television broadcast productions, including:

What I found with my own testing:

The “24p” is exactly 24p – not 23.97 as is standard for production. So that may create possible synch issues over longer clips in your production workflow if combining your GoPro footage with other cameras.

As far as the data rate and other tweaks to the sensor goes – this was the most notable difference I discovered. Look at the wall and the shadows in the raw footage before/after comparison below. Before the firmware update you will notice there is the typical low-light artifacting present in smooth transitions and subtle tones, plus the overall dynamic range has increased substantially after the Protune update. This gives a much more natural and softer look to the footage with a broadened range and flatter image color space. In addition to the examples below, scroll down for the side-by-side comparison video as well.

Notice the increased dynamic range and reduced artifacting in the Protune update.

Technical Bits from the GoPro Engineers:

As David Newman from GoPro provided insight to this new technology on his blog, The CineForm Insider, some of the reasons and math behind this update shows just how significant it really is… and here are a few excerpts (used with permission – major geek speak warning!):

Sensor technology continues to grow, and we are seeing awesome wide dynamic range images coming from premium cameras like ARRI Alexa and even the amazingly affordable Blackmagic Cinema Camera, but as sensor size (really pixel size) shrinks, there is an impact on dynamic range. Smaller pixels often result in reduced dynamic range, yet so much has changed in so few years. Back in 2006, CineForm was very much involved with Silicon Imaging and the development of the SI2K camera, which was highly praised and generally confirmed to have around 11 stops of dynamic range – good enough to be used on the first digitally acquired feature (well, mostly digital) to win Oscar Cinematography and Best Picture awards. The HERO2 sensor is smaller and has significantly higher pixel count (11MPixel versus SI2K’s 2MPixel, HERO2 pixels are way smaller), yet we are also seeing a similar dynamic range. It was not just five years of sensor technology that made all the difference, it was using a log curve instead of contrast added to Rec709 with 2.2 gamma geek speak for calibrating cameras to make the default image look good on your TV. Making images look great out of the box is the right thing to do for all consumer cameras, and you get just that with HERO2 via HDMI to your TV. Yet TVs do not generally have 11 stops of dynamic range, maybe 9 on a good set, and that is after you’ve disabled all the crazy image “enhancements”.

Some imaging basics: Light hitting the sensor and the sensor’s response to that light, is effectively linear (not the incorrect use of linear to describe video gamma that still seems to be popular.) Linear has the property that as light doubles (increasing one stop), its sensor value doubles. With an ideal 12bit sensor, ignoring noise, there are 4096 values of linear light. After the first detectable level of light brings our ideal sensor from 0 to 1, a doubling of light goes from 1 to 2, and the next stop from 2 to 4, and so on to produce this series 1, 2, 4, 8, 16, 32, 64, 128, 256, 512, 1024, 2048 and 4095 of doubling brightness (to the point where the sensor clips.) An ideal 12bit sensor has a theoretical maximum of 12stops of dynamic range. If we were storing this 12bit data as uncompressed, this is the most flexible data set (for color correction), yet this would be over 1000Mbits/s compared with today’s standard mode 1080p30 mode on HERO2 at 15Mb/s – think how fast your SD card would fill, if it could actually support that fire hose of data. Fortunately it turns out that linear is a very inefficient way of presenting light when humans are involved, as we see brightness changes logarithmicallya stop change is the same level of brightness change to us, whether it is from linear levels 1 to 2 or from 1024 to 2048. As a result, most cameras map their sensor’s 12, 14, 16bit linear image, to an 8, 10 or 12bit output with a log or gamma curve, exploiting that we humans will not notice. Even the uncompressed mode of the new Blackmagic camera maps its 16bit linear output and only stores 12bit with a curve – this is not lossless, but you will not miss it either. Lossless versus lossy is an argument you might have heard me present before, to the same conclusions.

If we remained in linear, converting to 8bit from 12bit would truncate the bottom 4 stops of shadows detail, we will notice that. So a conventional 2.2 gamma curve does the following with its mapping (top 5 stops shown.)

So gamma curves don’t fully embrace a human visual model, with many more codes used in the brightest stop as compared with the darker stops. The perfect scenario might be to have the 256 codes divided amongst the usable stops, e.g. 11 stops would be around 23 codes per stop. Remember, this is for an ideal sensor (i.e. noise free) and this is not going to happen. The darkest usable stop is mostly noise, whereas the brightest stop is mostly signal, we need a curve to handle the allocation of our code words with this in mind.

While the darkest useable stop have a similar number of code words as the gamma curve, Protune distributes the codes are more evenly over the remaining stops, more codewords are reserved for shadow and midtone information.

While I glossed over this before, again why not just have 23 code words per stop? This has to do with compression and noise. Noise is not compressible, at least without it looking substantially different than this input, and the compressor, H.264, CineForm or any other codec, can’t know signal from noise. So if too many code words represent noise, quality or data rate has to give. The Protune curve shown above will produce smaller files, and generally be more color correctable than using fixed code words per stop. We have determined the best curve to preserve dynamic range without wasting too much data to preserve noise.

Protune couldn’t exist as just a log curve applied upon the existing HERO2 image processing pipeline, we had to increase the bitrate so that all the details of the wider dynamic range image could be preserved. But we didn’t stop there. As we tuned the bitrate, we also tweaked the noise reduction and sharpening, turning both down so that much more natural detail is preserved before compression is applied (at a higher data rate required to support more detail.) Automatically determining what is detail and what is noise, is a very difficult problem, so delaying more of these decisions into post allows the user to select the level noise reduction and sharpening appropriate to their production. I personally do not apply post noise reduction, happy working Protune as it comes from the camera, adding sharpening to taste. The CineForm connection: 35Mb/s H.264 H264 is hard to decode, much harder than 15Mb/s. So transcoding to a faster editing format certainly helps, and that comes for free with GoPro CineForm Studio software. Also, the new Protune GoPro clips carry metadata that CineForm Studio detects and automatically develops to look more like a stock GoPro mode, cool looking and ready for show. All these changes are stored as CineForm Activate Metadata, are nondestructive and reversible, all controlled with the free CineForm Studio software. GoPro is working to get professional features in the hands of the everyday shooter, and the CineForm codec and software is an increasing part of that solution.

How does Protune work with the new CineForm Studio software update?

Per the instructions given to you when you first plug-in your Hero2, you will need to update your copy of CineForm Studio. The updates in the software are effective and offer more elegant control of converting/processing your footage clips right out of the camera, (however, you can still use the MP4 files directly in Premiere Pro CS6 and do your image processing there if you chose). When importing your footage into the CineForm Studio you can allow the default correction as a starting point to further tweaking the corrections you wish to your footage.

Here’s a side-by-side video comparison of both the before/after firmware updates on two identical Hero2 cameras, both raw and processed with the CineForm Studio software – PLEASE CLICK BELOW:

Beyond making adjustments to the color temperature, exposure, saturation and sharpness of your footage, CineForm Studio has presets for Protune plus many other creative effects, such as Night Vision, Sepia and Day for Night. In addition, you have controls that will make your footage much more useable such as Zoom, horizontal and vertical framing, rotation plus horizontal zoom and dynamic shift, to take the “squeeze” out of the center of the fisheye.

See Also: GoPro brings 24p to your Hero2 with the Protune update by Scott Simmons