An innovative monitor that thrives outdoors or in, and shows that 13″ can be as good as 17″ for many jobs.

I love having a big (or big-ish) monitor on set to see what I’m shooting and get excited by it, but the problem with most field monitors is that you can’t see them very well in bright daylight, even if you put a hood around them and set up a sun-blocking floppy overhead.

It’s a problem I’ve struggled with as I’ve been doing more outdoor shoots…until I tried out SmallHD’s 13” 1303 HDR monitor ($3499). The 1303 just laughs in the face of sunlight. With 1500 nits of brightness, it’s comfortably viewable in a bright, direct sun, without a hood and without much glare. I can finally see my image, and enjoy putting together a nice shot, instead of squinting and wondering what little detail I’m missing. And if I do have a little shade overhead, the monitor’s 1080 image, with 10-bit color depth, looks downright sumptuous. 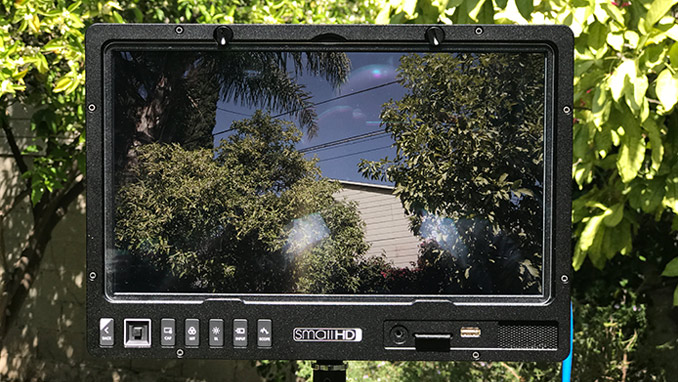 The 1303 is facing direct, mid-day sun here. Most other monitors would look like a faded, muddy mess. 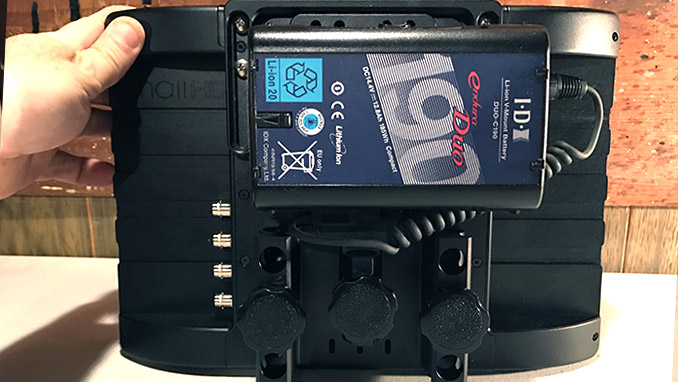 The monitor’s backside, with rails for accessories on each side.

Its outdoor chops alone earned the 1303 a permanent spot in my production van, but the monitor also has a lot of other great features that make real-world use a pleasure. Here are a few of my favorites…

1) Smaller, 13″ size! When I first considered the 1303, I wondered if I would like a screen that was considerably smaller than the standard 17” size I was used to. But I quickly left those worries behind. It turns out, 13” is still big enough to see what you’re shooting, especially if you’ve got it set up fairly close (I usually keep the monitor within a couple of feet of my A camera position). And since the 1303 is a little smaller than usual, it doesn’t crowd the camera area as much as a bigger monitor would, and it’s easy to rotate around for a gaffer or makeup person to see as well. So, from my experience, 13” is definitely a workable size.

2) The 1303’s viewing angle is also very good at 178 degrees, which means you can stand significantly to the side and still see brightness and color values properly. This is NOT the case with all monitors, including SmallHD’s bigger 17” 1703 monitor, which has only a 70 degree viewing angle.

4) The monitor can show two separate camera angles simultaneously, taking them from either of its SDI or HDMI inputs. Being able to see A & B cameras side-by-side is very useful when you’re trying to match up eye-lines, lighting, etc. 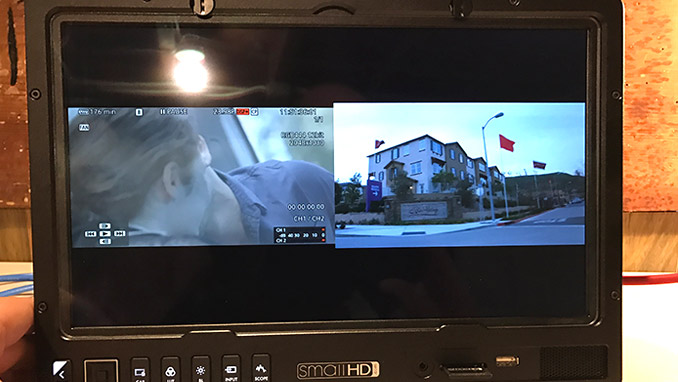 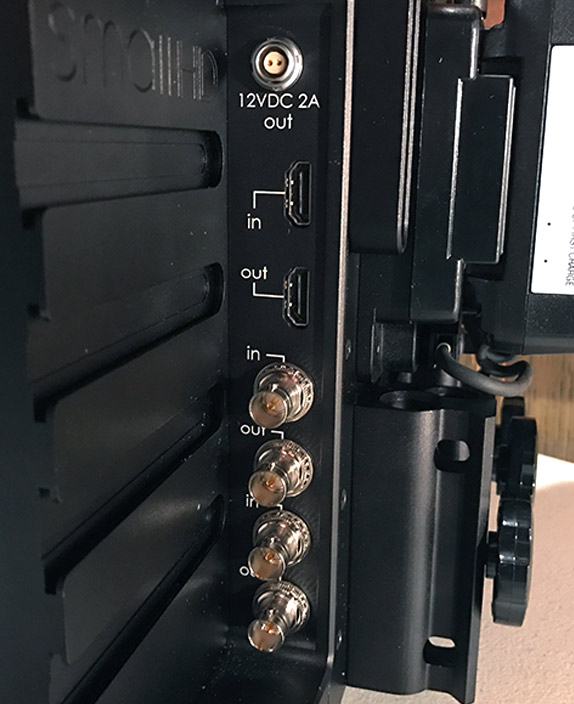 You have a set of HDMI in/outputs, and two sets for SDI.

5) Speaking of camera angles, SmallHD sells a $49 mounting accessory that lets you attach wireless receivers to the back of the 1303, and you can also power those accessories from a 12 volt lemo output on the back of the monitor too. You screw your receiver into the mount, and then just slide the mount into a groove or “rail” on the 1303’s backside. It’s a handy system, but if you want something simpler, you can always use velcro!

4) The 1303 has a fantastic user interface. For starters, it has 5 function buttons below the screen, all clearly labeled so there’s no guesswork to do (unlike buttons labeled F1-F5). Scopes, Inputs, LUTs, and Backlight levels are all one button press away, which makes using the monitor very fast for newcomers. But you can access all of the 1303’s other features (such as vectorscope, focus in red, zebras, false color, magnification, aspect ratio lines, etc.) using the monitor’s innovative Page system, where every page is a view of your image signal, but with different tools applied on top. I typically work with 4 pages (one with Focus in Red always on, another with Zebras, etc) and quickly move back and forth between them by flicking the small thumbstick on the front of the monitor. It’s a very easy, painless interface that you can teach anyone, and it’s also the same interface you’ll find on SmallHD’s other monitors, so if you have one of the company’s 5″ or 7″ or 24″ monitors, you’ll know your way around all of them. 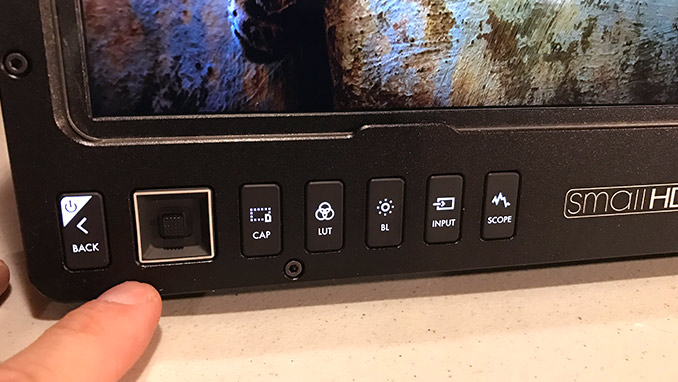 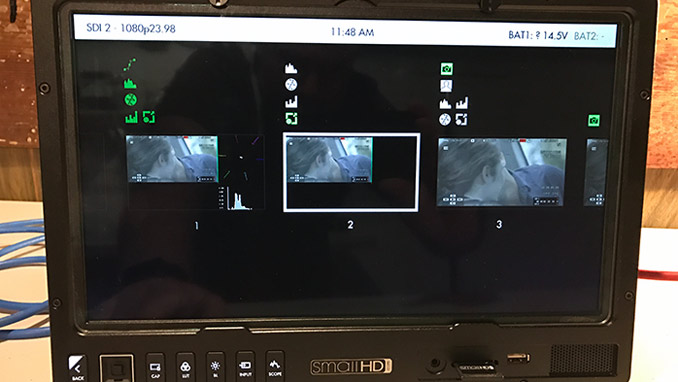 I have several Pages set up here, each with its own tools applied. I can quickly switch between Pages in this thumbnail view or full-screen view by flicking the 1303’s thumbstick left and right.

5) I love this: the 1303 can capture a still frame from whatever video is on screen. You just press the dedicated function button on the face of the monitor to save the still to an SD card. You can then assign that still image to a new Page, and use the monitor’s thumbstick to move back and forth between your live image and the still. I’ve always wanted this feature in a monitor, because it’s very helpful for matching a previous shot’s lighting and camera angle, just by eye balling it. But it also lets you do very precise matching because you can superimpose the still over a live image, at varying opacity levels.

6) The monitor is built like a tank, encased in an aluminim chassis, with a replaceable screen protector screwed in. That’s great for field work, although at 12 lbs, the monitor is definitely heavy for its size (my other monitor, a 17” Flanders CM171, is about 6.5 lbs), so you’ll want to mount it to a C stand. Personally, I would have preferred the 1303 be a little less tough and a little less weight, but oh well, it’s not a huge issue.

7) The monitor draws between 25 and 39 watts per hour, depending on the backlight level. Outdoors, you could expect to run it for a little more than 2 hours on a 90 watt V mount or Gold-mount battery. Indoors, you can dial back the backlight considerably in increments of 20%, and get an appreciably longer run-time. Personally, I slap a 190-watt battery on the back of mine, and forget about it for hours. 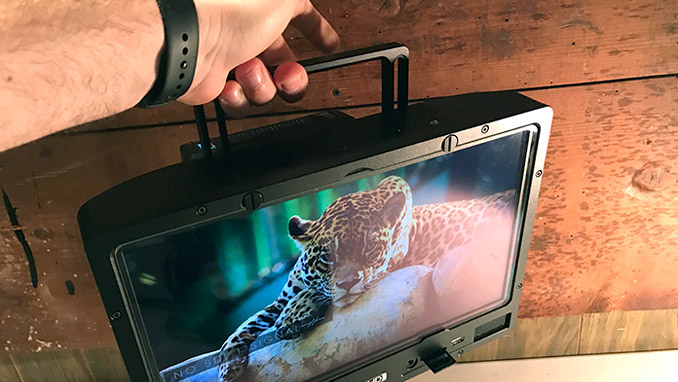 I’ve owned many field monitors over the years, but the 1303 is easily the most versatile and innovative. Its brightness makes it the best monitor I’ve ever used outdoors, and features such as push-button LUTs, dual camera angles, and image capture all are genuinely useful. Finally, I love the Page-based interface and clearly marked function buttons that make it easy to use for everybody.

At $3499, this monitor really is an investment, but it’s also a monitor that works beautifully in just about all scenarios.