The Dutti Dolly is a new, lightweight and travelable dolly from Matthews Studio Equipment intended to speed up your on-set workflow and allow you to shoot lower to the ground and in tighter scenarios than most other options. Like many DPs, I often like to shoot low to the ground so I jumped at the chance to give this thing a test run. 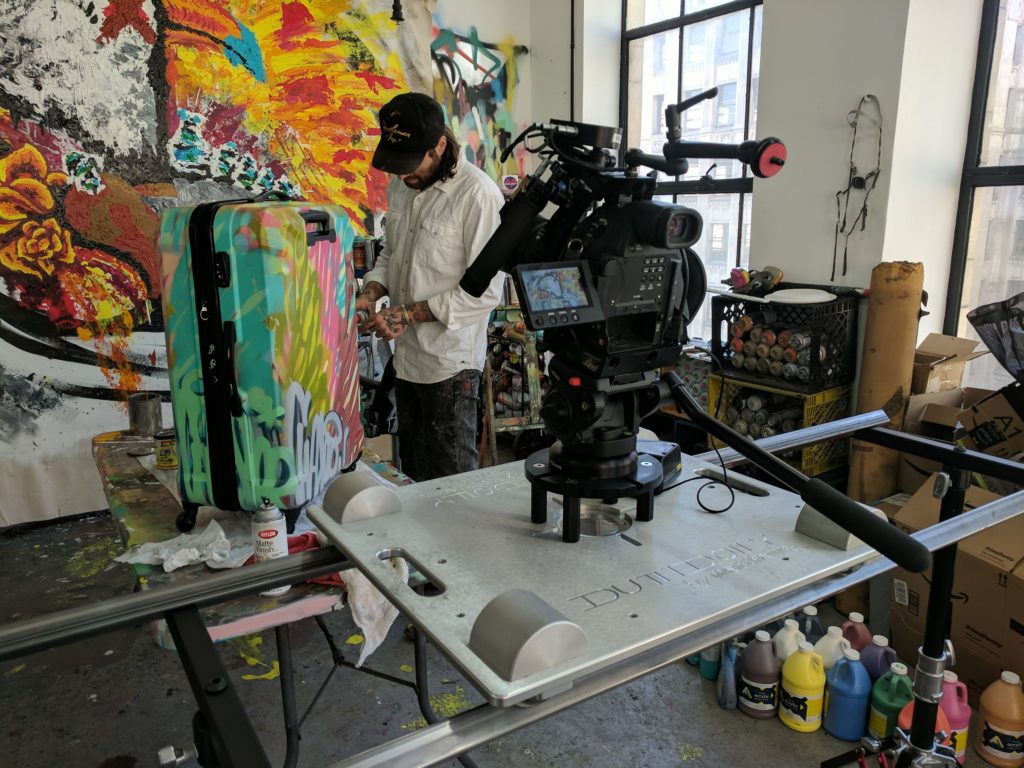 I’m not a gimbal fan, really. If I had my way I’d always be on a dolly/sticks or a Steadicam. The way a gimbal chooses your frame for you when a second operator is absent, or you can’t control the pan/tilt yourself, doesn’t sit well with me; I don’t like a machine making framing choices for me. As such, coupled with the run and gun nature of my shoots, I’m usually handheld. Speed of execution and portability of are paramount importance to me, so when I took the Dutti Dolly I knew those would be the two things that would make or break it. Does it “get in my way” and is it fast to set up?

My friend and frequent collaborator Chase Lock was tasked with painting a piece of luggage by the Ronald McDonald House Charity to be auctioned off at an event later in the month, so I figured a little film about that process would be a good test of the aforementioned qualities of the dolly. I wouldn’t know what he would do, where he’d walk, or what his creative process would be that day. This would be a pure run-and-gun scenario, as usual. No pre-production, pre-vis, or shot lists. 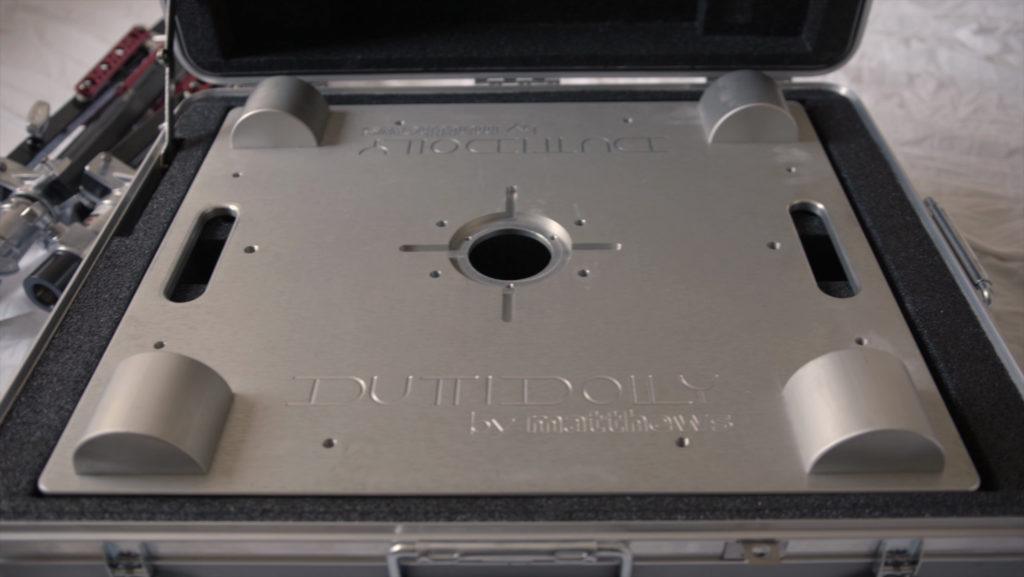 First off, as a solo shooter, I had to load everything into my car. The rental kit I was given came with the dolly, three braces (instead of two, for some reason), a 75mm & 100mm ball mount adapter with risers, and two stands which had to be hauled separately from the case that carried everything else. The case is about twice the height of the dolly and just barely wider so it’s pretty easy to manage. It even comes with wheels and a luggage-like extendable handle to pull it with. While the fully-loaded case is reasonably heavy, it’s not unwieldy. In total, I had my C100mkII and its accessories in a Pelican Case, the dolly in its case, the stands in one backpack and tools & sound equipment in another backpack, requiring two trips to the car. Not bad, all things considered. If you’ve got a buddy, you’re fine.

The dolly itself is incredibly simple: a 25lb aluminium “plate” with a Mitchell mount in the middle (adaptable to ball mounts), 4 sets of inline wheels, and two handle cutouts. There are also 14 ⅜” tapped holes for accessories, the 4 center ones being used for the ball head adapter. The sled its 20”x24”x3.5” and has a generous 800lb capacity. Setting it up was a breeze, only needing one hex key as the ball mount riser is attached with 8 screws. If you have a Mitchell tripod head, there’s a simple flat screw-in “puck” that comes with the kit allowing you to make clearance under the dolly just fine. Once your tripod head is attached, you’re basically done. Start shooting. 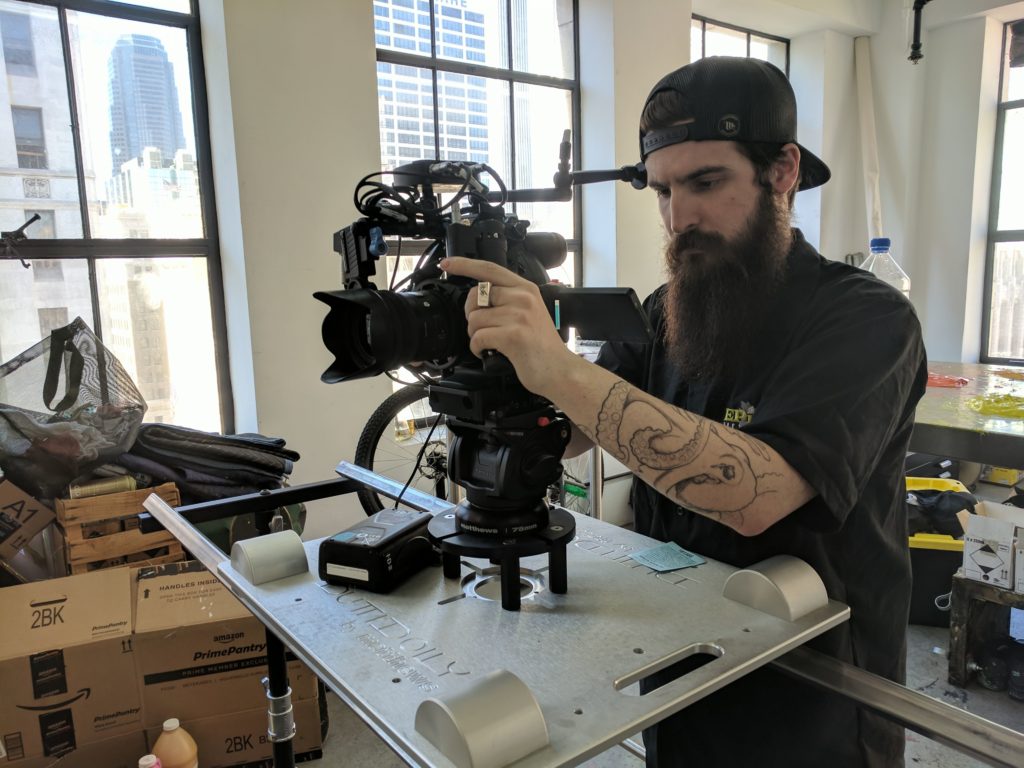 The wheels are a nice softness (or hardness depending on how you want to look at it) and the bearings are smooth as butter allowing for lovely gliding moves on any flat surface and even more so on tracks. The Dutti Dolly is comfortable on almost any kind of track you can put under it, square or round, favoring 1.25” square tube or angle iron with some wiggle room from .75” to 2.25” diameter track solutions. I used the square tube. The brackets are adaptable to any stand and took seconds to set up and tighten down.

The biggest problem you’ll likely run into ends up not being Matthews’ fault, and that’s the quality of your tripod head. My Manfrotto 503HDV is about a decade old and is a bit herky-jerky, so during certain moves I had to jam the handle portion under my armpit with my left hand on the RedrockMicro handle attached to the Ultracage, my right in the C100’s handle, and a Noga Cinearm connected to the top of the cage resting against my head. I could then use multiple points of contact and sort of “lean” into the camera to smooth out any moves. It took me a while to figure out I needed to do that, but that’s what camera tests are for (which, of course, I didn’t do). If you’re going to invest in this dolly, definitely add a nice tripod head to your budget to avoid any unnecessary headaches. Warp stabilizer in Premiere smoothed out any bumps or jerks just fine though.

There’s almost nothing to “review” here as the Dutti Dolly is dead simple, pleasingly portable, incredibly durable and (in true Matthews fashion) works exactly as advertised. Even moving between setups was pain-free and could be moved by Chase and I without taking anything down or removing parts. We just grabbed it by the brackets, held the rails with our thumbs, and carried it across the room with the camera and slider still on it. I’m sure that’s not the recommended method of transport, but the point is it’s not burdensome or awkward.

Overall, the dolly complimented my shooting style beautifully and kept up with the fast pace shoot just fine. Whatever shot I wanted (including one where I had to ride on it like a skateboard), the Dutti Dolly delivered.

If Matthews comes looking for me, tell them I went to Austria or something. I’m keeping it.