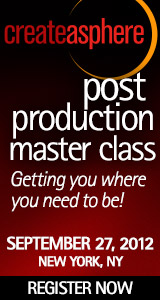 The Post Production Master Class is a one-of-a-kind event focused on the evolving post production process, facing shifting demands, trends and technologies. The event offers rare access to thought leaders who discuss their points of view about what’s happening now and what will happen to the professional post production community in the near future. As production, on-set, pre-production, visual effects and global interactivity continue to evolve, so too will post production. The PPMC presents highly regarded experts who share their knowledge and experience and give attendees a road map to navigate this volatile but exciting career path. The small group atmosphere allows exceptional access to these professionals and the peer-to-peer nature of the class encourages lively interaction.

In addition to the educational sessions, there are Tech Spotlights, presented by the industry’s top technology providers. The expertise of the presenters offers attendees the ability to have in-depth discussions of the latest technology affecting the evolving discipline of post production.

Session and speaker highlights in New York include :

Session and speaker highlights in Los Angeles include :

The PPMC in both cities is sponsored by the PNYA, HPA, ACE, ASC, and registration is only $45. For more information, please call 818.842.6611 or visit http://provideocoalitionexpo.com/ppmc.