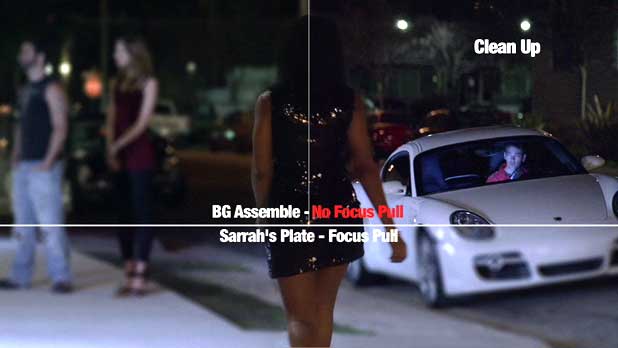 Shot by shot, this breakdown shows all the steps required to pull off a single shot for “Porsche: Magnet,” a spec spot I shot several months ago for director Ian McCamey.

(For more about this spot, please see this article as well as this one.)

I saw this breakdown about a week ago at a screening at Rough House, a post company in San Francisco, where Ian was putting on a visual effects demo. A former editor for visual effects powerhouse The Orphanage (which fell victim to the recession earlier this year), Ian is striking out on his own as a director and eagerly demo’d his work to a packed house of multimedia professionals. As soon as I saw it I asked for a copy to post on PVC.

I think it’s really cool to see how all the elements are shot separately in order to maximize control. The challenge for me was to find a way to light this set once, and only once, because every shot had to fit seamlessly together into the whole–and any change in the lighting would make the compositing process more difficult as the shots wouldn’t match perfectly. As it was, we lost a building light on Patricio’s plate due to a light sensor being tripped, and while the light came back on it wasn’t quite full on before we had to continue shooting. The color cast of the discharge light source coming up to speed changed the color of the car hood, as white reflects even the most subtle change in color, and Ian did a masterful job of matching Patricio’s plate to the others.

This process isn’t foolproof, though. I had one visual effects shot not long ago where we put one person in two different places in the frame at the same time, and the difference in ambient fill in one half of the frame subtly changed when the person was pulled from the first plate to appear in the other half of the frame in the second plate. Fortunately it’s a very subtle difference that no one (but me!) ever notices.

The tough part about this spot was accepting the amount of noise that resulted from shooting on a great camera (the Sony F35) with almost literally no light. Due to lack of equipment, I had to choose between a proper exposure, no noise and an awful look, or a beautiful look that was underexposed and noisy but that we could clean up somewhat later. I decided it was more important for the lighting to be pretty, so I lit 40′ of sidewalk with one bounced 800w PAR, two 4’x4 Kino Flos, an open-faced Arri tungsten 1k and a Walmart LED light inside the car. The image I saw on the monitor was brighter than what I could see by eye, and my meter read “E” when aimed at the fill light.

I’m consistently impressed with Ian’s use of music in his editing, and I think you’ll be impressed as well when you watch this video clip. We just shot a spec spot for Facebook completely MOS, and I’m excited to see what he makes of the soundtrack.

Meanwhile, I hope you enjoy this very interesting look into the mind of visual effects director/editor.

Art Adams is a DP who tries to improve upon reality whenever he can. His web site is at www.artadams.net.