Once upon a time the name Kodak was so popular that people called “kodak” to any camera. In modern days, GoPro seems to be the name people tend to give any action cam. But there are other “gopros” than the GoPro itself. Nikon, Rollei, YI, Sony and… Kodak are some of the “other” action cams you can choose from. 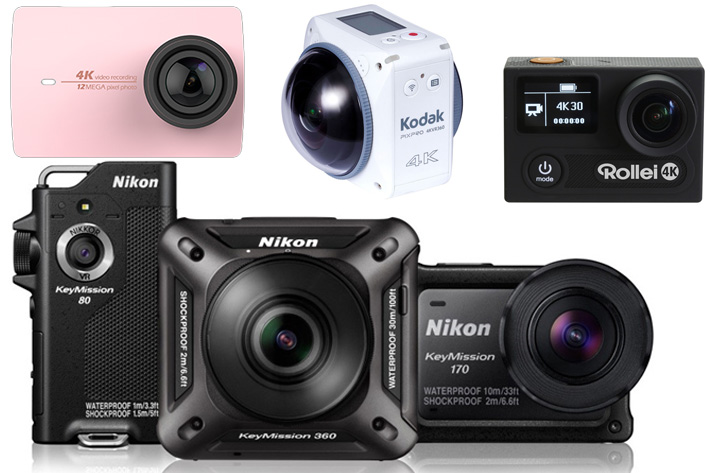 The 2016 edition of Photokina could be called the action cam edition. Many new models – including GoPro’s HERO5 – were on show at the Cologne trade fair for photo and video, offering the public a wider choice than is probably needed. As Roger Waters sings in “It’s a miracle”, we’ve got a choice. Let’s explore it.

The first place in this list  goes to Nikon. Not for any special reason, only because the list has to start somewhere. Nikon is not new to action cams, they’ve, one could call it, a mission, as their action cameras appear under the name KeyMission. It serves the marketing blurb, as Nikon promotes their product with this: “What’s Your Mission? Experience the Captivating Journey of Discovering, Fulfilling and Sharing Your Life’s Missions with Nikon’s New Line of KeyMission Cameras”.

The new trio of Nikon cameras starts with the KeyMission 360, followed by the KeyMission 170, and the KeyMission 80 a line that “encourages users to discover, capture and share their personal missions from an entirely new perspective”.

Previewed at CES 2016, the rugged KeyMission 360 is the first Nikon camera capable of full 360° video in 4K UHD, providing users a unique way to create engaging content like never before. At Photokina Nikon introduced the KeyMission 170, an adventure-ready camera capable of amazing stills and 4K UHD video at a wide-angle point of view, as well as Nikon’s KeyMission 80, a compact and lightweight camera for capturing the spontaneous moments of everyday life. Yes, it is only FullHD, in case you ask. 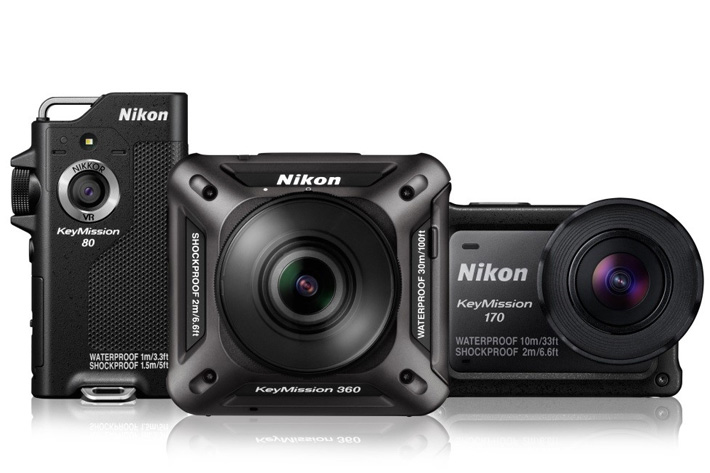 The KeyMission 360 can capture true 360° video in 4K UHD at 24p [3840 x 2160] or Full HD (1080p) that puts the viewer at the center of your journey. The camera has two f/2.0 lenses and two 20-megapixel CMOS sensors  that combine to create videos and photos without blind spots, although the camera may be unable to capture subjects within about 60cm/2 ft. from the camera’s top, bottom, or sides because the subjects are outside the angle of view (i.e. the area visible in the frame). Nikon advises to point the lens toward important subjects when shooting and adds that under some shooting conditions, the boundaries of the composited areas may be misaligned.

According to Nikon, the advantage of the KeyMission 360 is that “automatic in-camera stitching cuts down on the previously daunting editing process while eliminating the need for multiple cameras or specialized, expensive rigs, making it easy to share on supported 360° content platforms”. Allowing users to shoot in modes like Superlapse, Time-Lapse or Loop Movies that help provide unique perspectives of any story – or capture 360°, 30-megapixel still images, the camera has Electronic Vibration Reduction (VR) which is available after-capture to help steady playback. The in-camera stereo microphone helps provide crisp and clear accompanying audio.

A good action cam is ready for action, and the KeyMission 360 appears to be prepared. It is extremely compact and waterproof (98 ft.), shockproof (6.6 ft.) and freezeproof (14° F) with a rugged design, no housing required, that helps “ensure you are ready to fulfill your mission, wherever the journey takes you”.

Users can share completely stitched, immersive content in full 360° from either a compatible smart device or desktop computer using the new Nikon SnapBridge 360/170 app for iOS and Android devices, which allows users to access camera settings, simple editing functions or live view and share content directly. The app is essential when using the KeyMission 360, as it does not have a monitor. The app is required to set up this camera, use remote photography, play back images, change settings, and more. Before setting up the camera, install the dedicated app on your smartphone or tablet. Remember that wireless communication is not available when the camera is underwater.

For more advanced editing functions, the KeyMission 360/170 Utility program for PC and Mac users opens up a new world of editing options for more discerning visual storytellers. Included alongside the camera are a variety of accessories and mounting solutions that will help visualize a variety of activities, including a Base Mount Adapter, two Base Mounts, Silicone Jacket for added grip and protection, two lens protectors and a cardboard-style head mounted display that, alongside a compatible smartphone, allows for fully immersive playback.

The KeyMission 360 uses a standard 1/4 in. tripod socket to which a variety of different mounts and accessories can be used with the included base adapter. It is also compatible with an optional remote control.

The next model in the series is the Nikon KeyMission 170, which shares some of the features of the 360. The camera is waterproof (33 ft.), shockproof (6.6 ft.) and freezeproof (14° F) without a housing, always ready for your next adventure, and sees the world through a super-wide 170° angle-of-view, f/2.8 lens and 8.3-megapixel CMOS sensor combined to capture 4K UHD or 1080p Full HD video.

The camera sports a rear LCD that helps frame shots in live view, play back video and change settings with ease, comes with a remote control accessory, useful for stopping and starting recording or creating tags while capturing exciting new content, and has an optional waterproof housing available to extend underwater performance to 131 ft.

Small, rugged and lightweight, the KeyMission 80 is ready to capture fleeting shots at a moment’s notice. Easy to use one-handed, it turns on immediately after being unclipped from its camera holder ensuring users don’t miss out on their next precious memory. Waterproof (3.2 ft.), shockproof (6 ft.) and freezeproof (14° F), the KeyMission 80 will go with you almost anywhere. 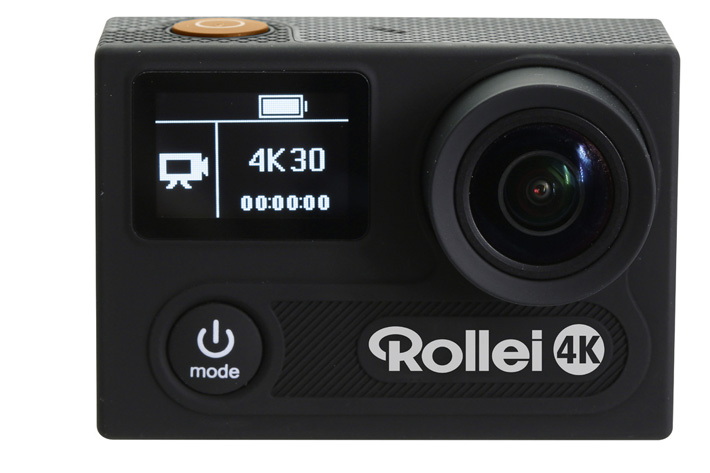 Rollei also wants a part of the action… although there is no sign that the action cam market has necessarily expanded. Still, Rollei took to Photokina 2016 their new Rollei Actioncam 430, which offers complete 4K UHD video resolution with an image rate of  30 fps,  2K video (2560×1440 pixels/60 fps) and finally Full HD at 120/60/30 fps.

The 170° super wide angle lens associated with a 12MP Sony CMOS sensor is the window to the world. The camera does time lapses and other stuff you expect an action cam to do and can be controlled through the integrated WiFi from up to 10 meters away. The Rollei Actioncam 430 also includes an underwater/protective case for depths up to 40m, and its battery can run for 90 minutes (without WiFi, at 1080p/60fps).

Rollei provides the Actioncam 430, as usual, with a comprehensive, complete GoPro compatible accessory package.  The price for the camera is € 229, which translates into something close to $280. 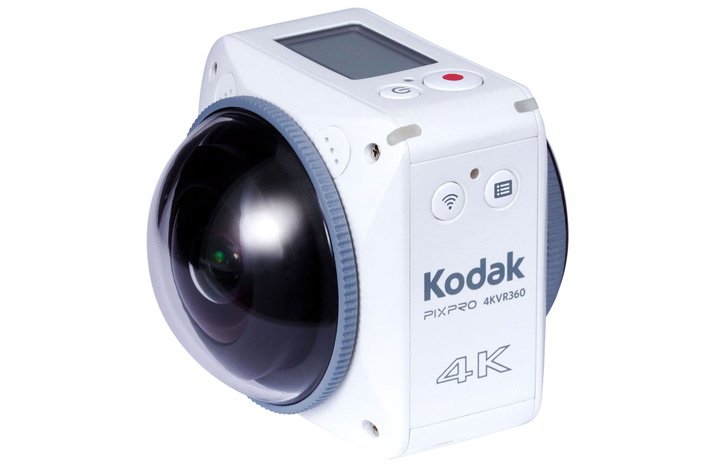 It is time for a Kodak, although we’re not talking about the original Kodak, as the new Kodak cameras come from JK Imaging Ltd., the worldwide licensee for Kodak PixPro digital cameras. This time the company introduces the Kodak Pixpro 4KVR360, which is a departure from previous 360 models branded Kodak, and is very similar to the Nikon KeyMission 360, even in terms of sensor and some of the specifications.

The new Kodak Pixpro 4KVR360 features two 4K fixed focus lenses on either side of the camera body, associated to two 20-megapixel CMOS sensors that combine to create videos and photos. With the SP360 model you needed two cameras to record 360° content. The camera incorporates WiFi and NFC allowing for remote control through a Smart device app. The 4KVR360 will also feature Bluetooth compatibility in an optional remote control device that can be worn to easily control the camera remotely. According to JK Imaging, the 360° camera is designed to be even easier to use with three recording modes and internal stitching.

“The decision to continue expanding our award winning 360° VR camera line up with the new Kodak Pixpro 4KVR36 was a natural progression,” said Mariame Cisse, Marketing Director for JK Imaging Ltd., Europe. “We are committed to the interactive 360° video format and want to give yet another option to consumers when it comes to choosing a quality 360° VR camera based on their specific needs.”

The new Kodak Pixpro 4KVR36 will be available early 2017. No price defined yet. 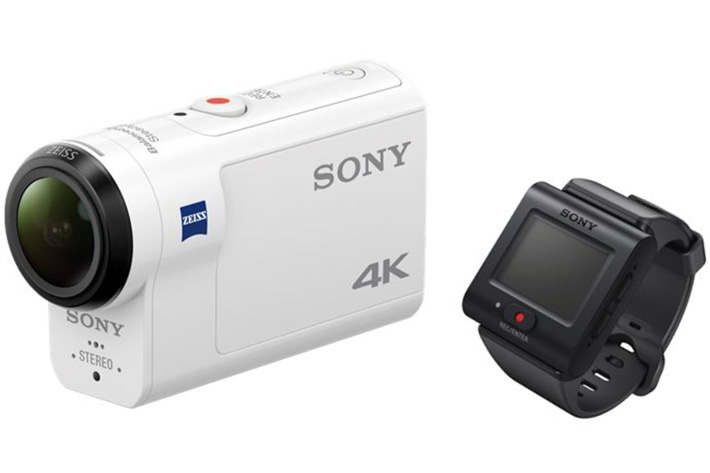 To end this update on action cams we look at Sony’s FDR-X3000R 4K, which offers B.O.SS or Balanced Optical SteadyShot,  a patented technology which has been rolled out across Sony’s premium Handycam range and for the first time has been adapted for use in Action Cam.

The addition of B.O.SS into this new model means that the user doesn’t have to worry about a jerky or jumpy video; they can focus on the activity they are participating in. The FDR-X3000R may be mounted on a bicycle or car, held in the hand using a range of optional accessories but will always deliver noticeably more effective image stabilisation compared to current models. This image stabilisation even compensates for strong camera shake and is available in 4K and high speed recording modes.

The new model comes supplied with Sony’s latest Live-View Remote which is approximately 30% smaller than its predecessor and can be attached to mount accessories such as the optional Handlebar Mount (VCT-HM2) using the supplied mount adaptor. This may also be worn like a wristband or attached to various optional accessories such as Shooting Grip (VCT-STG1) or the new Finger Grip (AKA-FGP1) with the key advantage being control of shooting settings including power on/off and start/stop recording, without having to touch the camera itself. Users can also control the camera with their smartphones and tablets with the free PlayMemories Mobile app. The new camera and Live-View Remote all feature a similar user interface and menu system, with a rich indication of camera settings that makes it easier to navigate menus and customise settings as needed.

The camera is waterproof up to 60m with supplied Underwater Housing (MPK-UWH1), and arrives in late September for $400 or $550 bundled with the Live-View Remote.