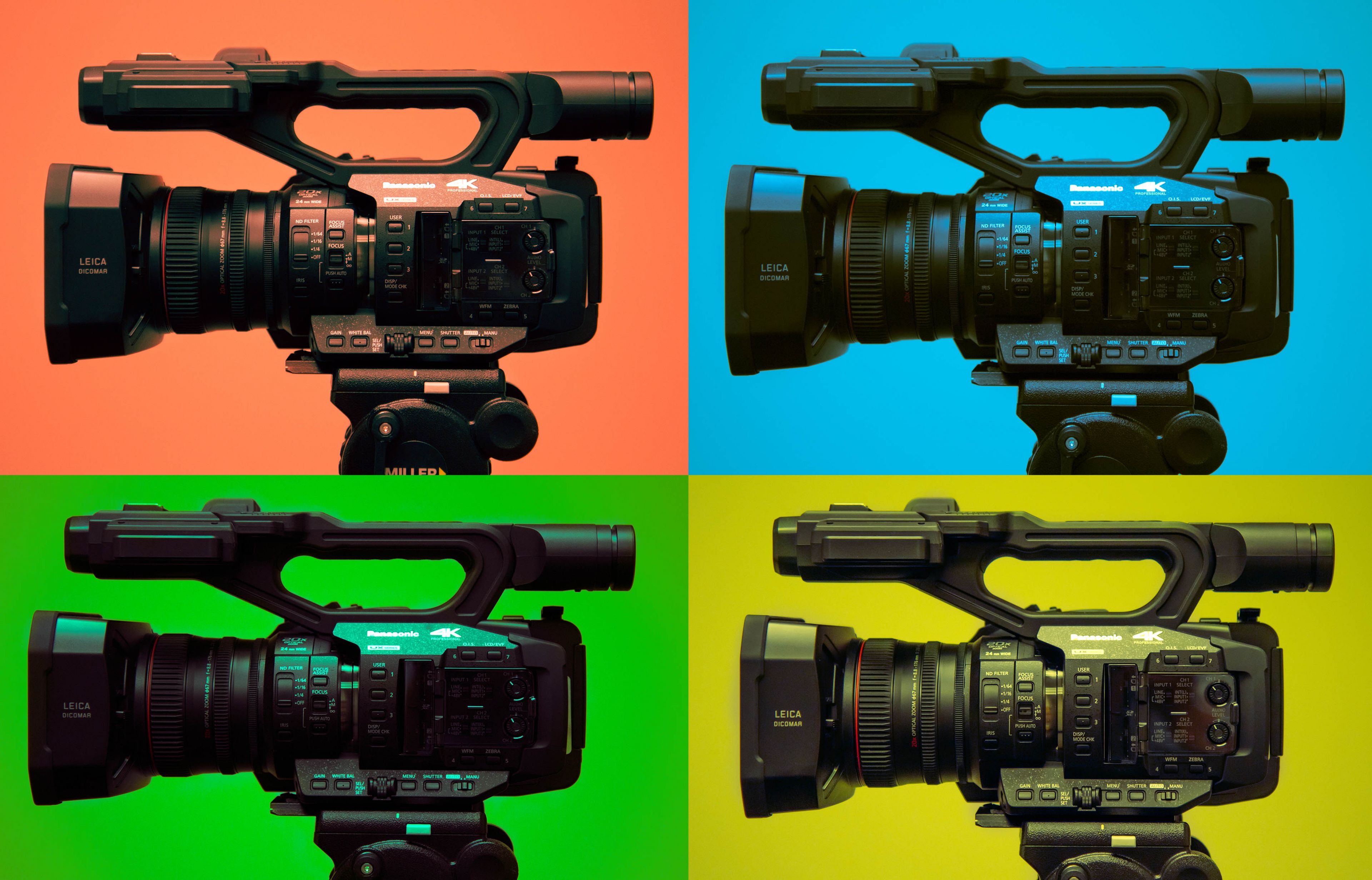 The Panasonic AG-UX180 boasts a 24-480mm (35mm equivalent) zoom range. That is one hell of a zoom range and a throw begging to be used for documentary shooting and news gathering. First, this lens is wide. If you are shooting interiors you will not feel restricted by the lens. When I used this camera for some interior shots the rooms felt large and I was able to capture all my necessary wide angles to cover myself. I think the days of being forced to find a wide-angle adapter for single-lens camcorders should be over. I was never much of a fan of the wide adapters. Just seems like something else to carry around and break, but that’s just my opinion. 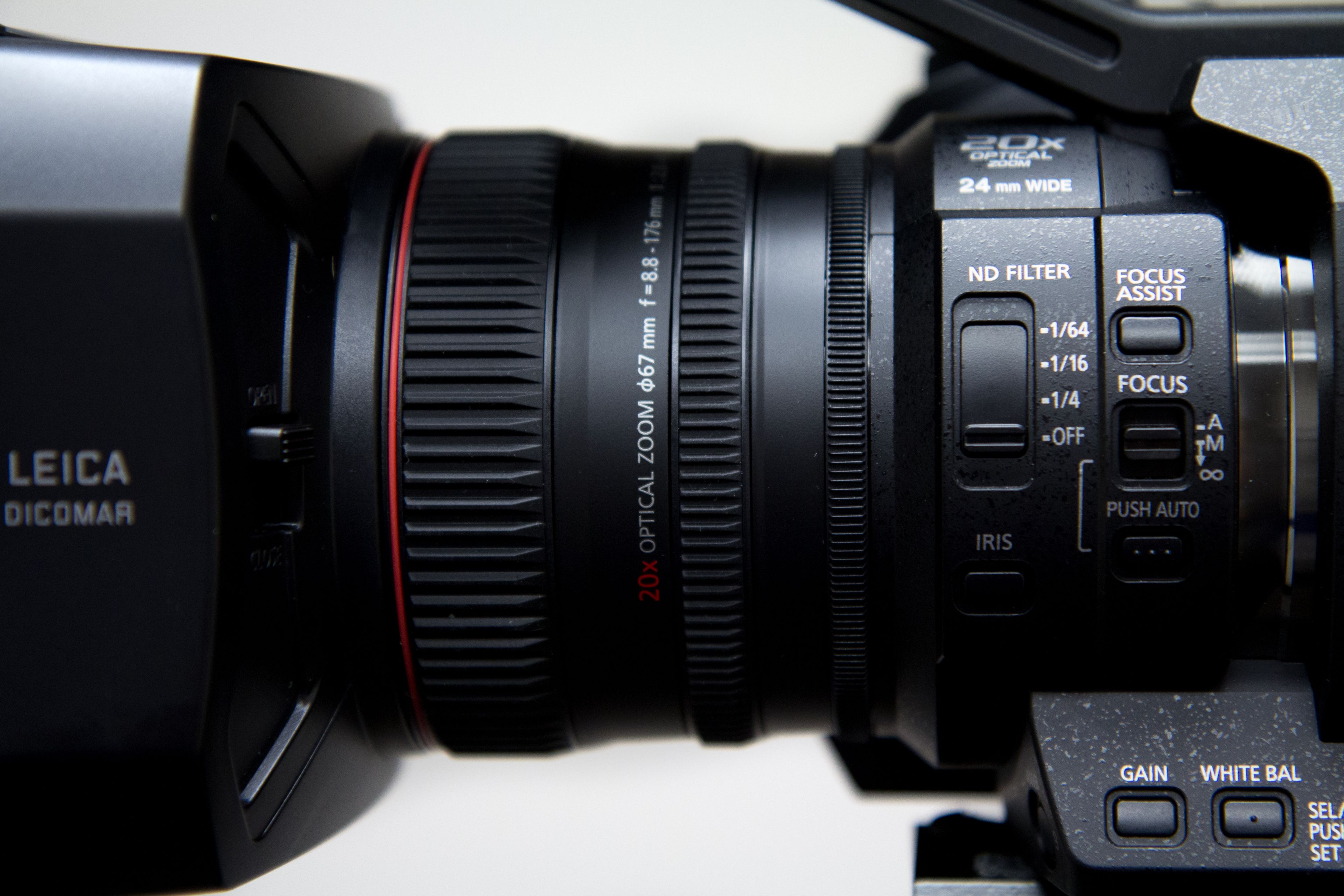 What the AG-UX180 does with the wide lens is only part of the story. This little camera has ever-so-lovely “Intelligent Zoom” and “Digital Zoom” options. Personally, when I shoot HD I love these nice little additions to a camera’s lens repertoire. The Panasonic AG-UX180 and its 4K sensor tech for an HD record give us the option to potentially extend the range of the lens throw by 300x when one combines the “Intelligent Zoom” and “Digital Zoom” together.

So how did the lens feel in hand? If you’ve used a single-lens camcorder then the Panasonic AG-UX180 will feel similar in your hands. The focus, zoom, and iris all have the kind of movement and feel falling somewhere between a DSLR rubber ring feel and a manual B4 lens and its combo of gears and rubber grips. 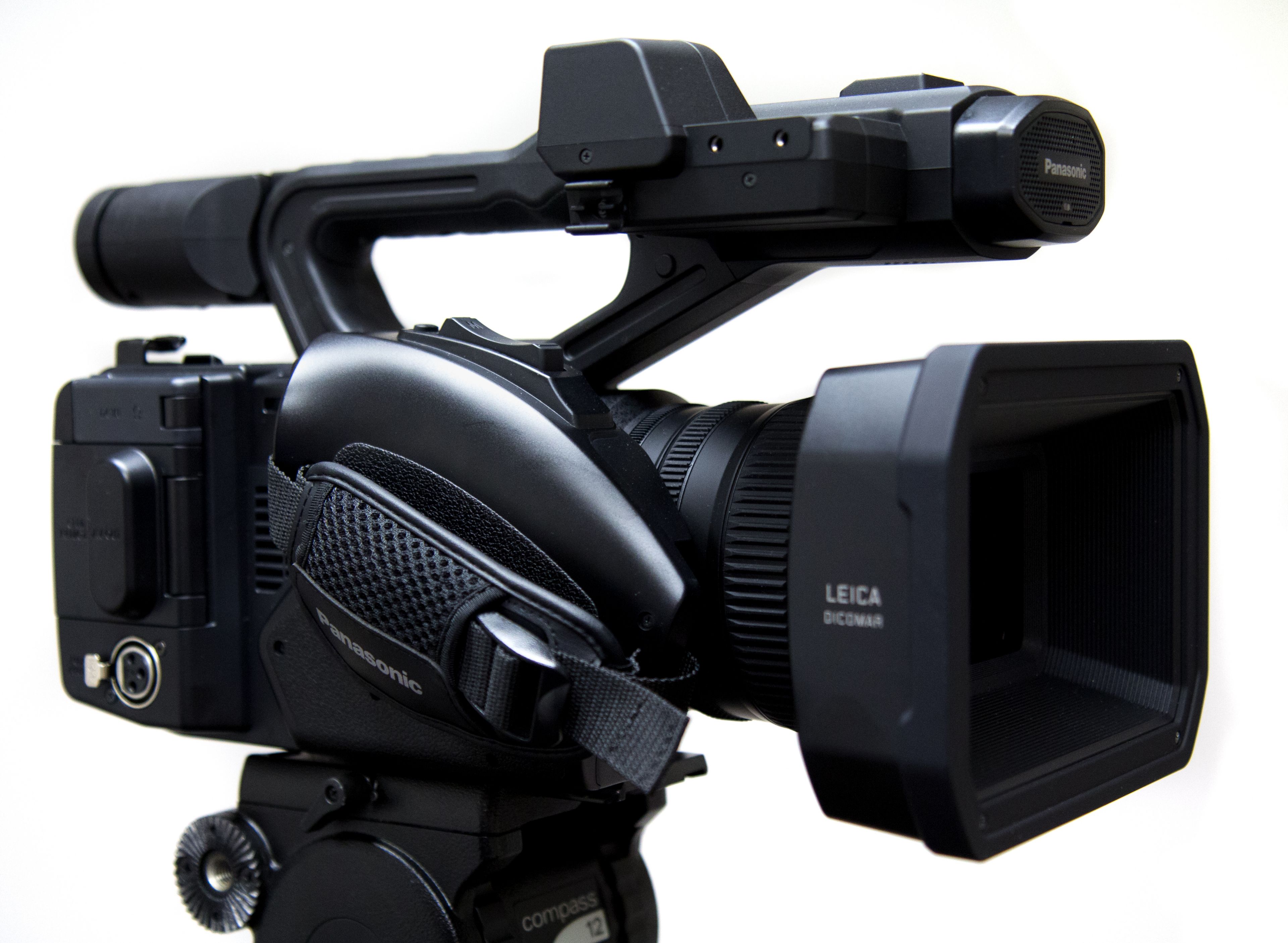 The AG-UX180 boasts eight different gamma modes. I rarely shoot anything other than the gamma offering the most dynamic range. I figure I can always recalibrate my blacks in the edit while retaining smooth gradations from black to white. Considering how easy it has become to boost the color and contrast in Adobe Premiere, Da Vinci Resolve, and Avid (I don’t use Final Cut so I cannot say how easy it is to color grade in the program) I do not see a ton of merit for choosing one of the other seven gammas if you are shooting and editing for yourself. If on the other hand, you are handing off your footage or trying to match a camera to several others then I see the need for the rest of the gamma selections. Panasonic says they are drawing on the technology from their VariCam line with these eight gamma selections. Personally, I’d like to see more drawn from the VariCam line with the addition of V-log and V-look. I say go all in and get as many people using V-log or V-look as possible. Of course, this is a sub $4,000 camera and maybe, just maybe, Panasonic is reserving their beautiful gamma selections for those willing to pay. Business-wise it makes sense and maybe those using the Panasonic AG-UX180 are not really the V-log crowd. The eight gamma selections are:

Yet, these gamma settings listed above are not all the options for in-camera color. Unlike many other single-lens broadcast camcorders, the AG-UX180 comes with a 16-Axis Independent Color Correction Function. This allows for an independent effect to each of the 16 phases of video images. It enables color matching of many different cameras under the same lighting conditions. This way an engineering department can match a fleet of cameras to ensure a TV station has the same look from one camera to the next. 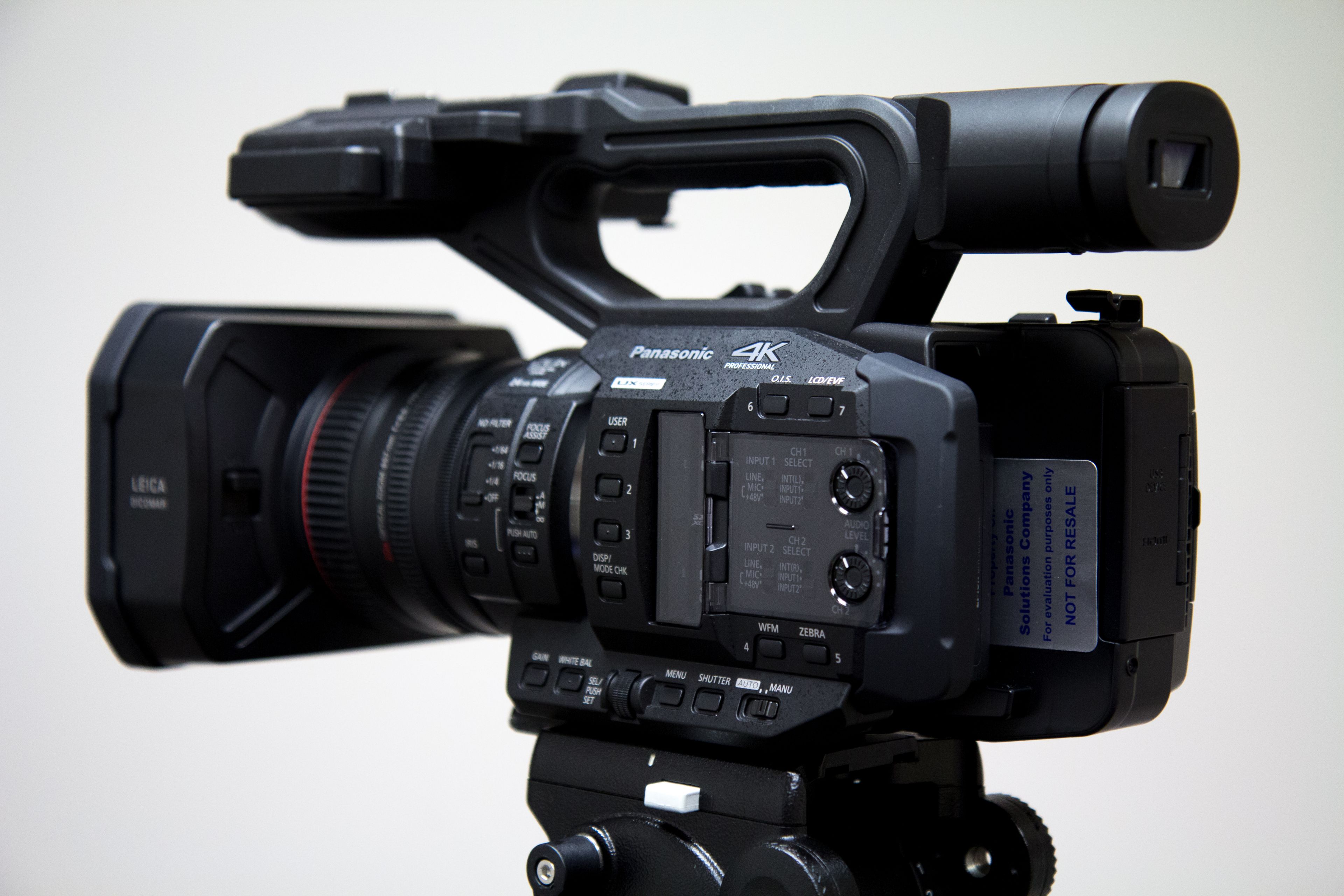 Moving away from Micro P2 is definitely a huge positive in my opinion for this camera. Choosing to go with less expensive SD Cards is something I’ve been pushing since the last Panasonic camera I reviewed. For a camera priced at $3,495.00, I think it’s wise and more affordable for the Panasonic AG-UX180 to be using SD cards. The SD Cards are less expensive than Micro P2 and the AG-UX180 has a dual card recording feature meaning a shooter can use two cards to capture his 4K footage. A 64GB Micro P2 card cost close to $299.00. This is expensive for a max write speed 200Mb/s card. Yes, it has a read speed of nearly 2GB/s but I don’t see much of a use for a fast “read only” benefit when you typically record, or write, to a card. A comparable SD card like the Lexar 64GB Professional 2000x UHS-II SDXC Card cost $91.82 and it has write speed of 240MB/s. The Lexar also comes with a card reader. A third of the cost with more write speed. Smart move by Panasonic to allow SD card use on the AG-UX180.

The AG-UX180 camera looks, feels, and shoots like a camera made specifically for news and the occasional documentary work. I can see small to mid-size market television stations turning to the AG-UX180 as their HD, for now, and 4K for the future camera. It makes complete sense to me to witness a news manager pitch this camera to his company because of what appears to be a great ROI on a camera expected to last through a potential 4K upgrade. Are TV stations going 4K or is it just WRAL?

This camera, or a fleet of them, will not break the bank. The AG-UX180 is inexpensive, appears to perform similarly to other Panasonic single-lens camcorders, and will take next to zero time for a potential shooter to learn the camera’s ins and outs. The wide lens and digital zoom options are just extra butter on the bread for a news station and the new features found in camera might be enough to keep shooters happy.

The HD footage looked great and I would consider it to be in line with the usual good Panasonic broadcast quality. I have seen sharper 4K and less sharp 4K. I think the AG-UX180 falls right in the middle on this scale, which is not bad for the 1.0″ sized sensor camera. The biggest lesson I hope to impart to would-be AG-UX180 shooters would be this: “Trash in equals trash out.” If your video signal peaks it’s lost information. If your video signal is way underexposed, it’s lost. Never forget this is an 8-bit color camera. With the AG-UX180 what you capture is what you get. Do not expect to be able to pull off a ton of color correction with these files. For one shot I decided to point the camera out the window and expose for the outside light. I wanted to see how much dynamic range could be seen, or even be useful, for a shooter. Initially, I was impressed for the little AG-UX180. It had some dynamic range chops, not a ton, but more than most any single-lens cameras. While overcast winter days do not make for great examples of dynamic range I think the quick little video found below offers a good idea of the overall 4K quality. This is just a small shoot I did at Nashville’s old Minor League Baseball stadium for this review. 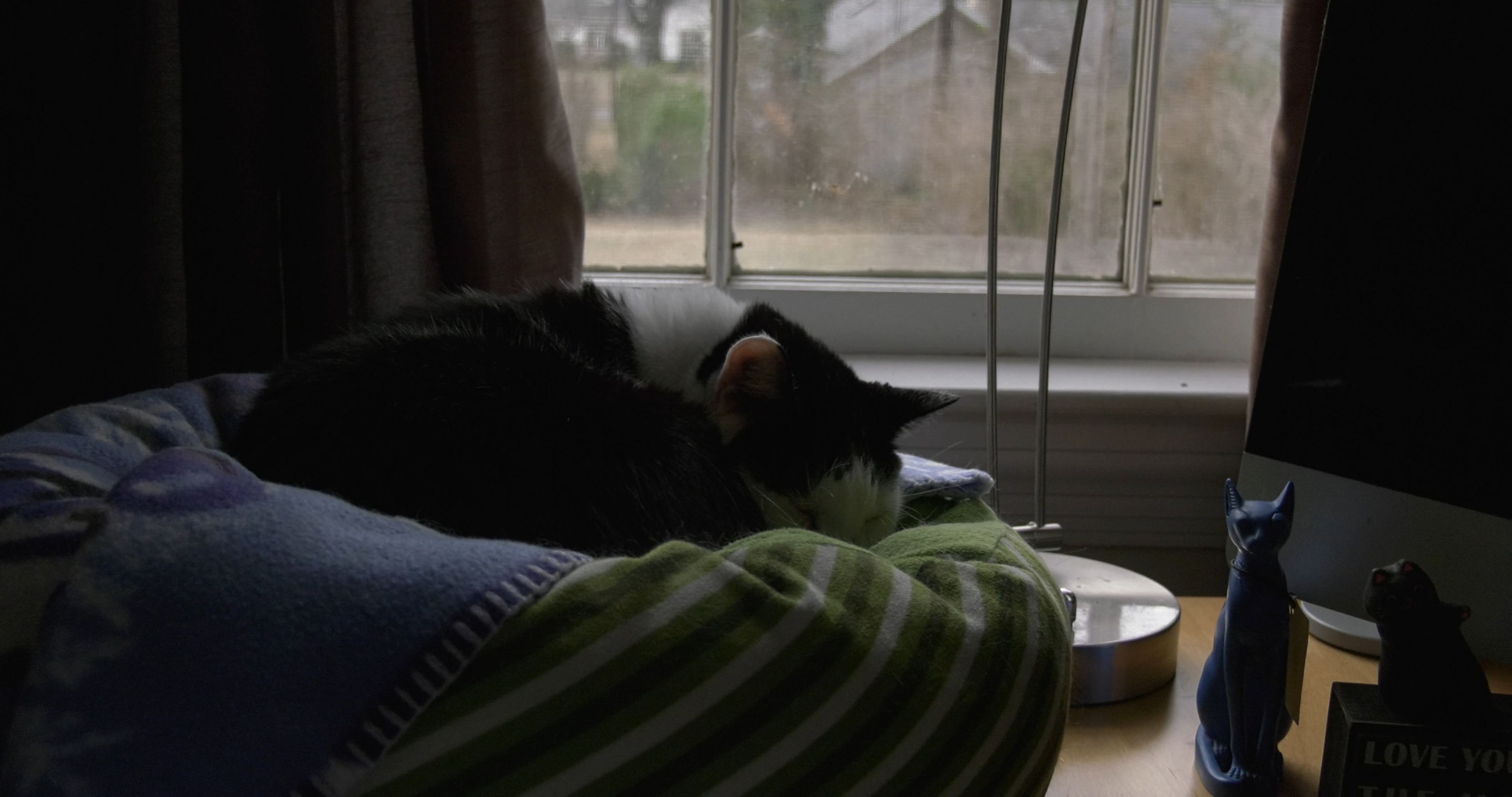 Smooth. I love smooth footage. I also love lenses capable of removing my BS. That’s “Body Shake” and not the other BS you were thinking about. I did several “scientific” tests with the AG-UX180 and its OIS. These tests involved one of my cats named Lily and her proclivity for laziness. Seriously she never moves from her cat bed next to the window. I took the AG-UX180 and shot handheld capturing various focal lengths of her to see how well the OIS worked. She did n0t move and the camera’s OIS turned my BS into something resembling smoothness.

Worry not, I did test the OIS while out shooting subjects other than my cat. I came away from those shoots thinking the OIS was best served when the camera was on a tripod and you were shooting on the long end of the lens. The vibrations caused by traffic, the wind, or even my inability to not bump the camera turned into a subtle smooth bump. It’s a good stabilizer and maybe one of the better stabilizers.

I love how the LCD Monitor can be tucked away and stored. I’ve seen plenty of camcorders with damaged LCD screens. This is the point of weakness on some cameras. Tucking it away is smart and will save the screen from damage. Otherwise, the LCD monitor felt it could have been a little sharper. I had trouble nailing down critical focus without the focus assist activated. I also found the LCD monitor to be a little bit more reflective than I would prefer. It’s not a deal-breaker reflective just know when shooting in bright daylight the EVF will be a must.

Let’s talk about the Focus Assist. I love the zoom-in capability and I love the red peaking. I just want to be able to have a button for both and these buttons are separate. When the camera is in standby mode you are given the zoom-in function. When the camera is recording you are given the red peaking function. Once you go back to standby the focus assist bounces back into the zoom function. I wish these were separate. Please make them separate. Hell, maybe there is a way to make them separate and I am too dumb to figure it out. It happens.

In the end, I think Panasonic made a single-lens camera many shooters who would be happy to shoot with it in their hands. The HD footage is perfect for broadcast and the 4K will be the little extra on top. Will these shooters use the 4K function? I bet they will use the variable framerates first. Otherwise, the pros outweigh the cons on this little camera and anyone with any skill should be able to make pretty pictures with the AG-UX180. 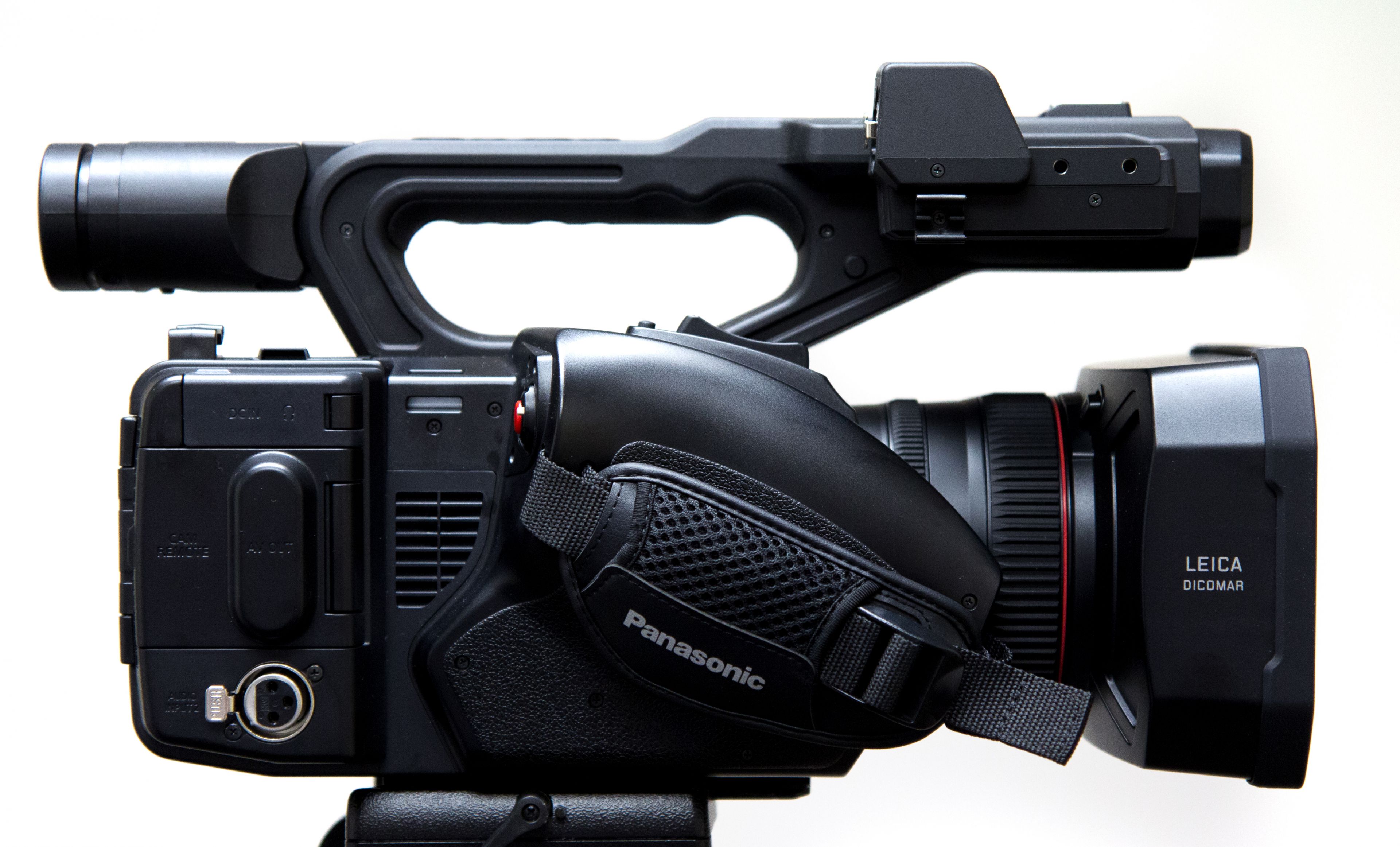 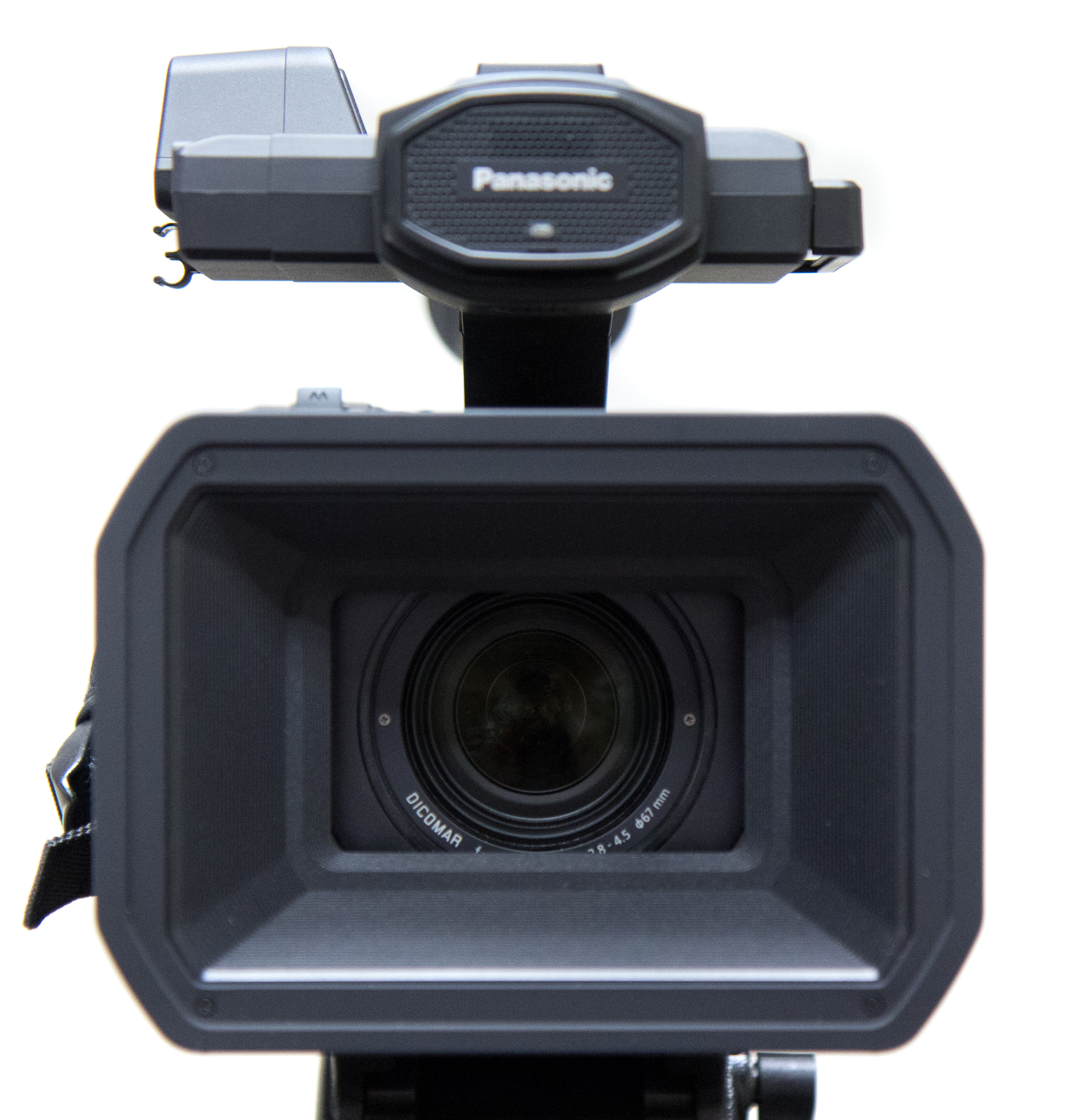 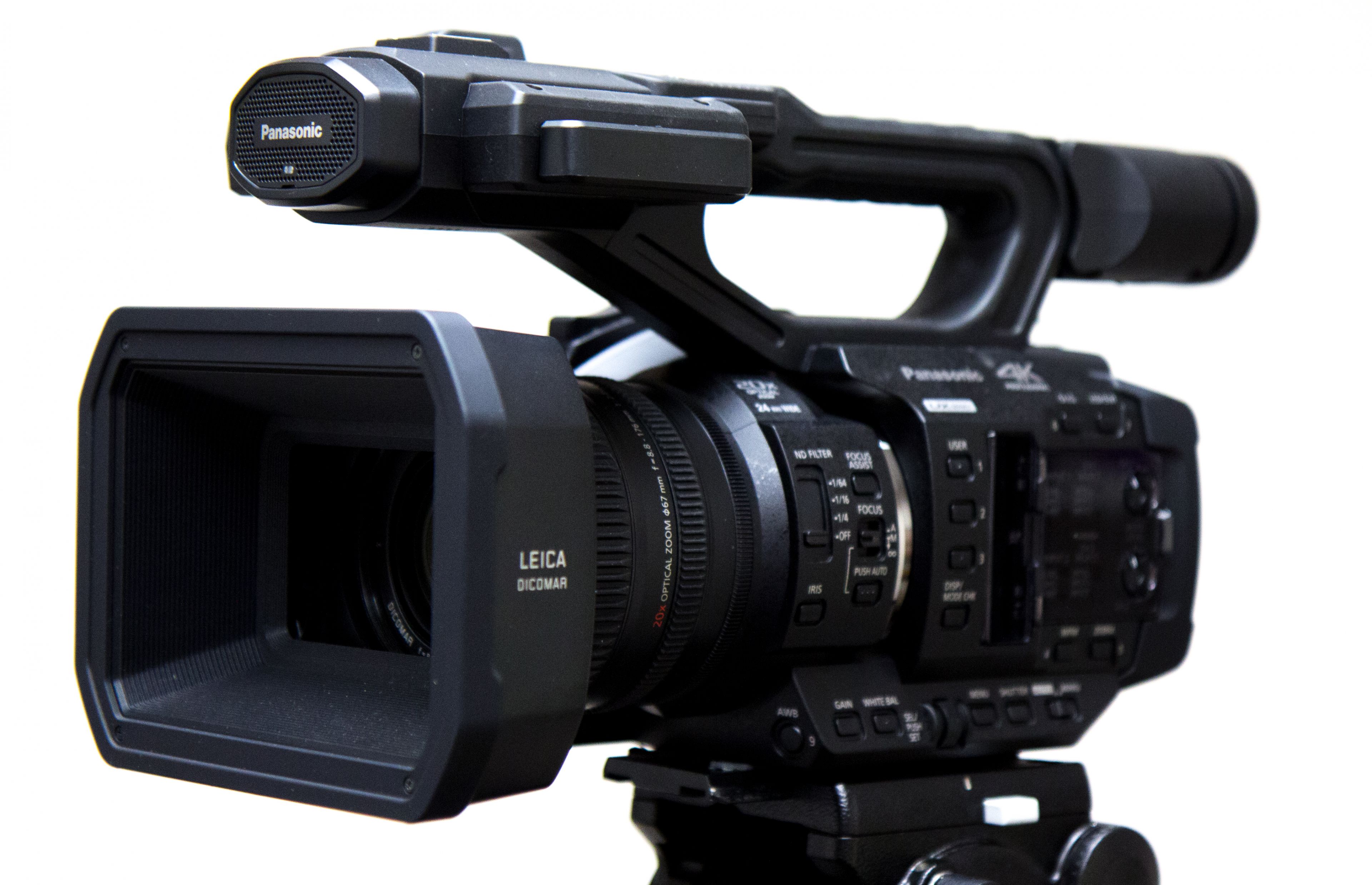