Speeding up our NAB Coverage and what we learned

We stopped by the booths. We saw the gear. We talked to as many industry manufacturers as we could. Then, after the exhibit floor closed, we dived into long edit sessions. Our game plan was simple: Cover NAB as much as possible, and edit throughout the day and into the evenings. We turned to Adobe Premiere Rush to speed up the log jam NAB video editing can become. Premiere Rush not only kept the river of completed edits moving along but also sped up the process. Let me tell you about our team’s experiences using Adobe Premiere Rush during NAB 2019.

We were not prepared for how fast one could edit in Adobe Premiere Rush. We could kick out a short one-on-one booth interview, with broll, music, animation open/close, lower third graphics, and a PVC logo, in around 20 minutes, sometimes we could kick an edit out in even less time. How so? Premiere Rush automated many actions for us. Our lead NAB editor, Matt Pfingsten, had this to say, “I’ve seen this sort of thing before; where a software company tries to automate and “simplify” complex tasks and make them “just work.” Typically it turns into a guessing game where the developer tries to guess what you want to do and all hell breaks loose when they guess wrong and you have no way to fix it. That isn’t the case with Premiere Rush. Its automated tools are very solid, especially in terms of mixing codecs, formats, resolutions and frame rates.”  All of this automation helped us edit faster.

I can get lost in options. In Adobe Premiere Rush the tools are simple and easy to use. One does not get bogged down, you just edit and share. This is exactly what Adobe wants Adobe Premiere Rush to be, which is also exactly what we needed for our NAB 2019 video coverage. Four tracks of video and three additional tracks of audio, totally 7, are the max number Premiere Rush gives editors. For fast NAB coverage, it was all we needed. We could simply grab our interview video clip with all of our audio and then select our cut-away camera. We mostly shot our booth interviews with two cameras simultaneously to speed up our shooting times and interviews. In Premiere Rush we would simply manually sync the two video clips and then cut out the broll we did not want.

NAB videos are simple one-on-one interviews about the newest gear announcements and showing video of the gear we are talking about. Each video had a simple animation, which we pre-built in AfterEffects, lower-third name graphics, and a PVC bug.  We built these graphics assets prior to our flight to Las Vegas. Anything we could handle before the show started we did so. We wanted to be able to focus on our NAB News coverage and only our coverage. 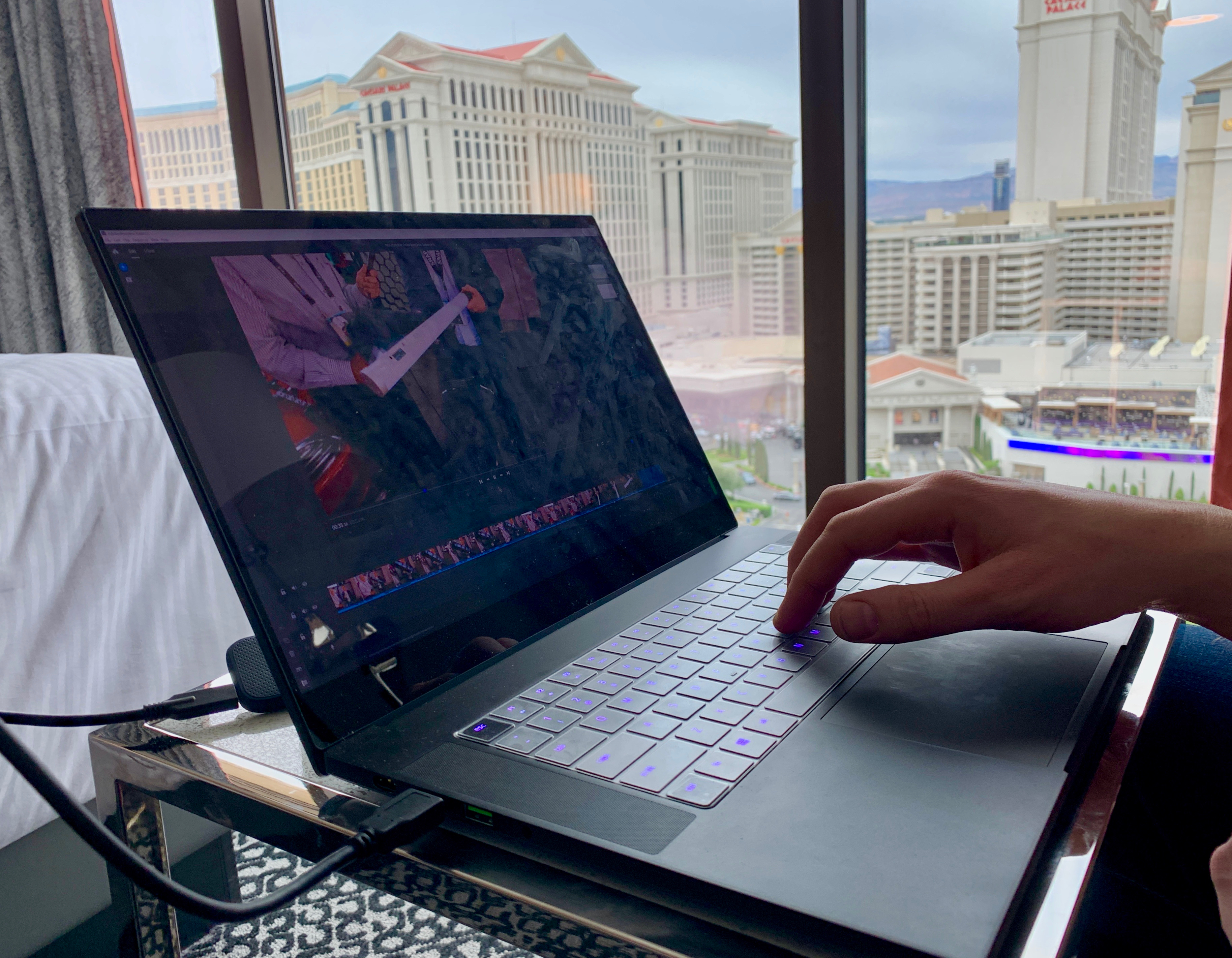 This was the biggest obstacle we encountered during NAB. First, our Rode mic got damaged as we traveled to Las Vegas so we bought a mic off the show exhibit floor. Thankfully, we could do so this year at NAB.

Then we discovered Adobe Premiere Rush does not have an option to pan a channel of audio from one channel to another. A channel 1 track cannot be panned to channel 2. Meaning some of our videos on the PVC Live YouTube page only had one channel of audio. For those of you who commented about the left speaker on their computer having all of the audio from the interviewee, we heard you. Trust me, we heard you clearly.

“The ability to pan a single channel or at least make it fill the left and right channels would have been very helpful since we shot with two mics. You can turn a channel on or off, but nothing more than that,” according to Matt our Lead Editor.

Now that we have experienced Adobe Premiere Rush and its audio limitations we have a solid workaround. As we prepare for Cine Gear we plan on shooting on the Blackmagic Pocket Cinema Camera 4K which has the ability to record the XLR mini input to both the left and right audio channels. In the future, we will have a dedicated single microphone in hand and record to both channels of audio. Instead of our NAB choice of using a Lavalier on the interview subject and a hand-held mic for the interviewer. This new process easily solves our problem with audio.

This is the section of audio where Adobe Premiere Rush killed it. In the editor, you can find a few delicious features within the audio tools of Premiere Rush. Balance and Crowd Noise Reduction were the two tools I seemed to use in every single NAB Video edit. Obviously, the noise reducer was going to be used during NAB, but we complicated our audio situation ourselves. On our first day, we lost a mic, it became damaged during our flight to Las Vegas and we had to go with a single wireless lavalier for our day one videos of NAB. This meant our interviewer was not wearing a mic. This could have been a disaster for us. In Adobe Premiere Rush, the “reduce crowd noise” feature automatically helped our handicapped audio sound a ton better. These tools were simple and easy to use.

This was fast and easy. If you have used Adobe Premiere’s sharing tools then the ones in Premiere Rush will feel similar. You have the option to input your Youtube, Instagram, Facebook, and Behance credentials so an export will be uploaded to the web. This can save many a step by posting straight from your edit page to your youtube page. I chose not to do so during our NAB sessions because I felt like it took a little longer which was likely a wifi issue. Instead, I exported videos out of Premiere Rush and uploaded to YouTube as I edited the next video. The process allowed me to upload and edit simultaneously. 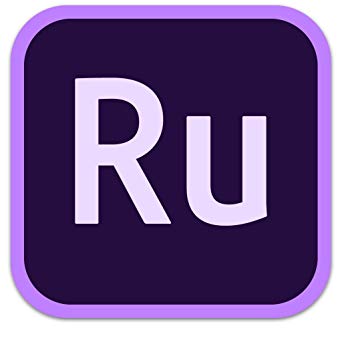 Matt says, “if you find yourself needing to do something that Rush just can’t handle it’s easy and painless to move into Premiere Pro and from there into the rest of the Creative Suite. A lot of frustration of post-production is the poor interoperability between apps. You spend a lot of time conforming and recreating work you already did because it didn’t transfer. With Rush, you can do anything the app is capable of without having to worry about what features won’t transfer into Premiere Pro. You can move up without having to redo anything. No wasted time”

Something unique we experienced, which may be isolated to our NAB rush, when using Premiere Rush on either Windows and Mac, we ran into an issue where all available RAM was consumed and Premiere Rush crashed in the absence of an internet connection. Now, you can offline edit with Premiere Rush so maybe what we ran into was really a wifi connection issue and less an Adobe issue. This RAM issue occurred even if we disabled syncing with the cloud. Once we figured out the problem the solution to stay connected to an internet connection was simple. For the time being, keep your computer connected to the internet when you are Using Premiere Rush.

The BIG QUESTION is this, will we use Adobe Premiere Rush again? Absolutely. It sped up our NAB coverage considerably.

All in Adobe Premiere Rush is a solid and fast editor and we will be using it again. The editing software truly sped up our edit sessions. This speeding up in post-production meant we, as a group, could kick out what we consider important industry video news coverage to audiences not attending NAB 2019 faster. When we deliver content faster we tend to have a larger viewership. Just like any news organization speed is key and the first to broadcast tends to own the story and audience. Working with Adobe Premiere Rush helped us succeed and cover the NAB convention as we have never done before. When we can jump in and edit nearly all of our daily videos on the day we shot them, that is good business. If you have not tested the water yet with Premiere Rush I say jump in and start editing something small and simple which is what I did. Either way, shoot, edit, and repeat.