It help keep those littler fingers from pressing the home button. 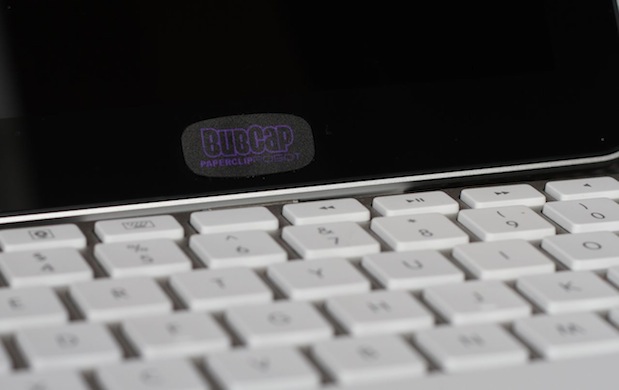 This is a bit off topic of the usual post-production related stuff you might here but if you’ve got a toddler and an iPad then you’ve most likely got a toddler who wants to play with your iPad. While I’ve heard a few holier-than-thou arguments how some parents would NEVER allow their child to touch their iPad (not because they think the kid would break it but rather that it’s not good for the child’s development) I do let my 20 month old play with it from time to time. He loves it.

The problem is that eventually he ends up pressing the home button and the fun ends. Enter the brand new BubCap.

As my boy started enjoying some of the many iPad apps for kids (like Itsy Bitsy Spider and BabyPiano) it became inevitable that he would eventually press the home button. He seems to stay away from the sleep button but the home button is on his radar. I searched the internet for hours one day and couldn’t find a single product that could be used to keep the home button from a toddler’s fingers. Eventually I did find a site promising just that. It was a company called Paperclip Robot and they had a sign-up page to be alerted when this product was going to ship. 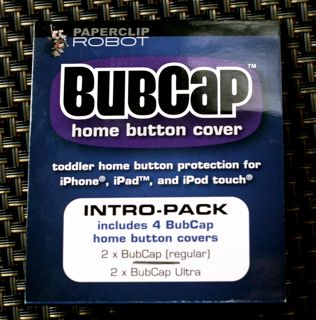 I finally got that alert and placed an order for the $5.00 product that they call the BubCap Intro Pack. They arrived in my mailbox just a few days later. The packaging is like a matchbook. Flip it open and inside there are four stick-on BubCaps: two regular BubCaps and two BubCap Ultras. 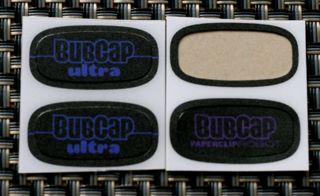 The premise is simple: these are small plastic-like stickers that you place over the home button. They are just stiff enough that the home button can be activated with enough force pressing on the BubCap but the force required probably can’t be applied by little guys or gals fingers. As your kids grow older and stronger, apply the BubCap Ultra; it’s even stiffer than the regular BubCap.

I can report that after a few weeks using the regular BubCap the toddler has yet to activate the home button. With that I declare the BubCap a success. It seems a little strange at first to be placing this stick-on item right on the glass screen (they do not recommend placing the BubCap over a screen protector) but after taking the BubCap off and reapplying it twice it still sticks just fine. It can be removed by gripping a corner with a finger nail and pulling it off.

But other than that I think the BubCap is well worth $5.00, especially since you get four of them. And they work on an iPhone or iPod Touch. They are also working on a BubCap Pro designed more for trade show or professional use. Check out the BubCap website for more detailed information or to order your own. Your toddler will thank you for it.

And while we’re talking about nice toddler-related iPad accessories I’ll mention the Griffin CinemaSeat. We tossed this over the headrest of the car during a long holiday trip. Couple that with the boy’s DVDs that I had ripped and put on the iPad and it helped make for a relatively pleasant 8 hour ride.