In what was the inaugural year for UAVs/Drones with aerial imaging technology to have their own place at EAA Airventure Oshkosh 2015 will prove that the Aviation Gateway Park and the Innovation Center & Drone Pavilion are going to be permanent fixtures for many years to come at this, the world’s largest air show.

In what was the inaugural year for UAVs/Drones with aerial imaging technology to have their own place at EAA Airventure Oshkosh 2015 will prove that the Aviation Gateway Park and the Innovation Center & Drone Pavilion are going to be permanent fixtures for many years to come at this, the world’s largest air show. 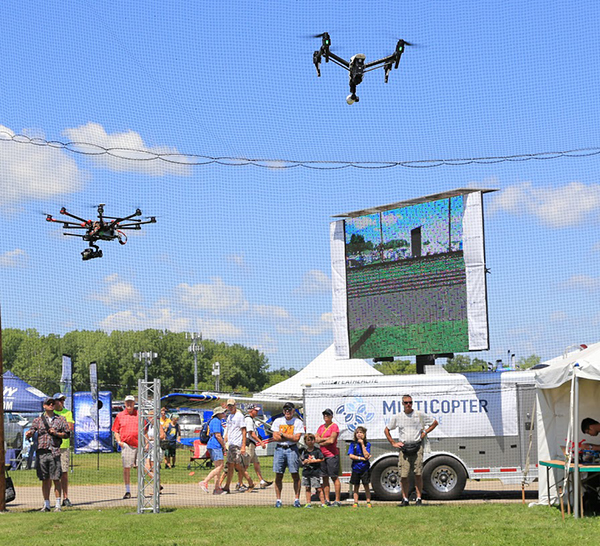 After months of planning and preparing for the launch of this new addition to one of the world’s largest air shows and fly-ins (attended by over a 1/2 million people in a week), the reality of what we had prepared for along with the EAA management and staff was now upon us on opening day.

The new Aviation Gateway Park hosted a Jobs pavilion, Forums pavilion and Innovation Center with attached Drone Cage so people could sit inside the air conditioned tent and watch the drone demos through the large windowed opening and the live screens and audio pumped inside. THere was also a jumbotron outside the cage that displayed the live feed to viewers around the cage and in the bleachers at the opposite end. 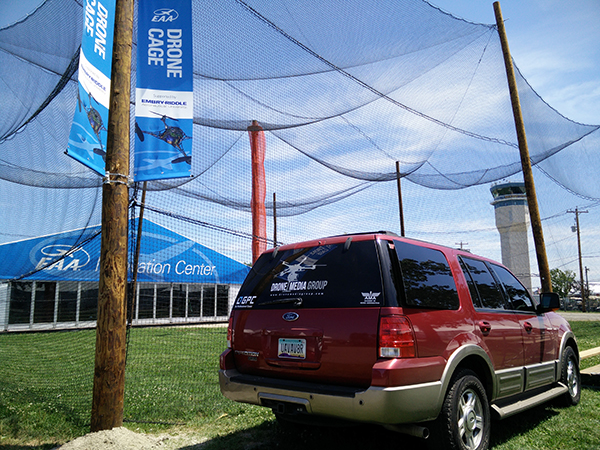 People asked “Why the Drone Cage?” to which our repsonse was to secure the approved flight operations and safety of the spectators and the airspace around the park. While all of the pilots flying in the cage were experts, things can also go awry due to technology and radio interference and being that we were literally less than a 100 yards from the airport’s controll tower, we had to be sure there were no “incidents”.

We also had special authorization from the FAA and EAA to be allowed to fly in this cage and special firmware was granted to our team by DJI to allow the new Inspire 1s and Phantom 3s to be flown there. Typically, there is a No Fly Zone established with these craft from the factory that is within a 3-5 mile range of all airports and landing strips that will not allow you to fly into nore take off from within that radius. I applaud DJI for implementing this safety feature for the general public, as I’m sure the FAA is greatful (and so are the millions of private and commercial pilots throughout the US).

The week long activities started with early AM call on the first open day to fly demos for the TV and news media to share this new technology with the morning news shows. We then moved out to the ribbon cutting ceremony followed by 7 days of presentations, lectures, demonstrations and endless stream of people coming through the exhibits asking questions about the technology and the industry as a whole. 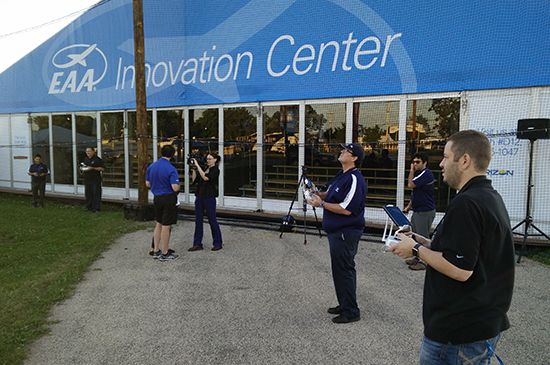 We also had opportunities to have a bit of fun during the free-fly time at the neighboring Pioneer Park Airfield in the evenings where the AMA hosted an RC Fly-in for its members and we could get a good view of the entire area, including the 10,000 privately-owned planes parked around Airventure as well as the Googyear Blimp parked just down-field from us.

We were also invited to go flying at sunrise at the EAA Seaplane Base before most of the pilots there awoke from their campground, so get some spectacular views and shots around the lagoon that takes you back in time about 50 years!

But what better way to really share with you this experience than with a video montage that features highlights from he week along with many of my colleagues and sponsors!

I hope you enjoyed this look into an amazing experience shared with manned aircraft on their “turf” and hope you might have the opportunity to come check it out for yourself in the future. I know we’ll be back again next year, bigger and better!

My biggest take-away from my first year attending this week-long event was that these pilots are very interested in this new aerial imaging technology and are receptive to having them enter the airspace in a safe and professional manner. This is the educational part of why we get involved in these expos, shows and conventions – to teach people what UAVs/drones can do and how to be a professional when using them. But just like anything, there are unprofessional/hobbyists that draw all the attention of bad publicity and media that tend to give the industries a black eye from time to time.