The new camera from Olympus goes back to the concept of 1960’s models, with knobs and dials killed by ergonomics in the 1990’s. Welcome to the PEN-F, a mirrorless offering Full HD video. 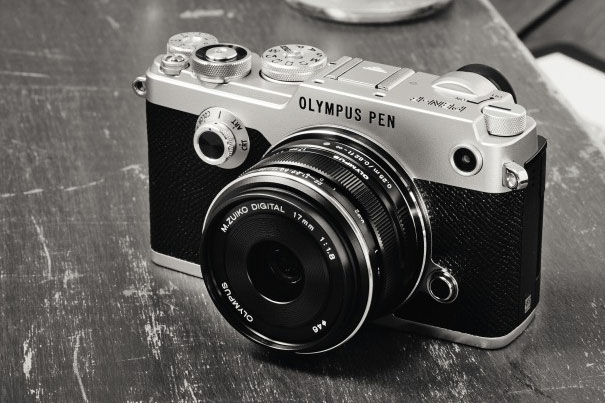 With a new 20MB sensor, apparently similar to the one used in Panasonic’s GX8, the Olympus PEN-F continues to forget 4K video on a model that, otherwise, has some interesting, although frightening new features inside.

The Olympus PR people gave us multiple versions of what the PEN-F can be: Europeans wrote that “Olympus PEN-F: High end camera performance never looked or felt so good”, while the Global website said this “Olympus PEN-F, Compact System Camera Special PEN with a timeless beauty in its design”. In the USA they wrote, “Olympus’ iconic masterpiece: the new PEN-F combines timeless design with sophisticated color profile control for the ultimate street photography tool”.

Presented as a compact system camera created by fusing cutting-edge digital technology with craftsmanship handed down from 80 years of Olympus camera manufacturing, the PEN-F, says Olympus, is packed with “incredible performance advancements for photographers seeking superior image quality and creative control.” Absolutely new is the 20 megapixel Live MOS Sensor, which finally breaks the 16MB barrier that seemed insurmountable for Micro Four Thirds cameras. The fact that it appears some months after Panasonic used a similar sized sensor in their Lumix GX8, suggests both companies still have ties, although the two cameras are different when it comes to the public they want to attract.

The Lumix GX8 offers 4K video, something that is almost a trademark of Panasonic models, while Olympus keeps rolling with Full HD, although offering multiple options within the standard. Olympus doesn’t pay special attention to the video on the information available about the PEN-F, although they mention 4K to say this: “in 4K Time Lapse Movie, the camera captures up to 999 images automatically at intervals ranging from one image every second to one image every 24 hours, and combines them into a stunning high-resolution 4K video, all in-camera, without the need for additional software.”

Full of tricks, the PEN-F also includes Live Composite Mode, which allows users to extract and composite the brightest areas from multiple, sequentially shot images to capture incredible cityscapes and star trails. With the PEN-F’s built-in Wi-Fi, users can utilize the Olympus Image Share app for Android and Apple to adjust settings and monitor the progress of the image as it develops in real time on a smartphone or tablet.

The camera also features, for those who enjoy macro photography, Focus Bracketing, a feature that captures multiple shots at the touch of a button, all with slightly different focus depths. The new Live View Boost 2 makes it possible to easily focus and compose shots while checking visible stars in Live View. The PEN-F’s high-speed sequential shooting capabilities let users capture all the action at 10 fps with the mechanical shutter, 5 fps with C-AF, and an extraordinary 20 fps with Silent Mode.”

If you’re like me, it is frightening to read the list of things these cameras can do automatically. At this pace, soon, photographers will not be needed behind the camera. Or we can just tell our cameras to go out and shoot whatever we want, while we watch the last movie on TV… 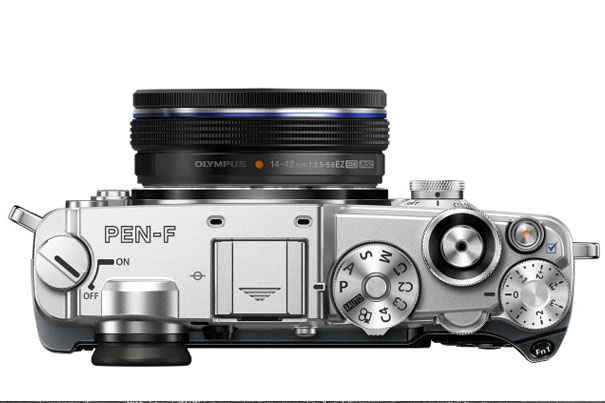 Emulating film with a PEN-F

Back to the PEN-F, it does not only follow the looks of Fujifilm X-series cameras – which also look back to the Sixties – but also follows the goal to emulate photographer’s favorite films. The new Monochrome and Color Profile Control functions present are there to allow photographers to give their images the look they want. These functions, adds Olympus, differ from using photo editing software after shooting, as they allow users to apply and check effects in Live View while shooting to create their own original images. Both functions include quick-select presets designed to give images the look of classic film. Or, settings can be completely customized to achieve specific looks. The camera’s front-mounted Creative Dial accesses Monochrome Profile Control, Color Profile Control, Art Filters, and Color Creator, all with a simple twist.

Looking at specifications, the PEN-F is also one of the fastest to focus, faster than DSLR’s, says Olympus. Let’s leave that for those always looking for the next fastest thing, and explore something rather interesting: the new integrated and interactive viewfinder.

Olympus has – finally – accepted that those clunky external viewfinders from earlier models are no good, and the PEN-F is equipped with a built-in 2.36 million-dot high resolution OLED Electronic Viewfinder (EVF) with a 100-percent field of view and a magnification rate of 1.23x (35mm equivalent: approx. 0.62x) for a clear view without aberrations, even at the edges. After all, the original PEN-F had an integrated viewfinder, a porro-prism finder solution which allowed for an optical viewfinder inside such a small body, without the need for the hump so many hate on SLRs and DSLRs. The porro-prism system design for optical viewfinders has been used in other small cameras, like the APS Minolta Vectis, and is a good example of how small optical viewfinders can be built. 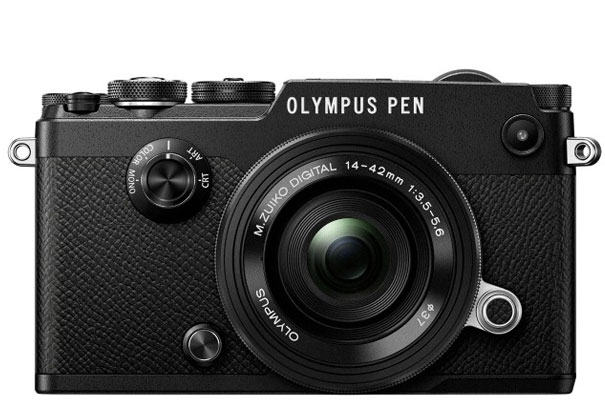 I mention this because Olympus presents on the PEN-F their own version of an optical viewfinder… although simulated. Yes, we now simulate what was real and simple, to start with. It is, no doubt, a strange world we live in. Having said that, I am curious to see how the Simulated OVF (S-OVF) Mode works to, as Olympus says, “expand the dynamic range and provide an image similar to what would be seen with the naked eye”. The fact that Olympus implemented it indicates that they assume many people like optical viewfinders… and also that nothing beats an optical viewfinder when it comes to show the full dynamic range of what is being framed. It should be said, though, that electronic viewfinders also have advantages. The magnified display function and Focus Peaking (which offers three levels and four colors), for example, allow for extremely precise lens focusing.

Another interesting aspect of the new PEN-F is the LCD monitor, which is vari-angle, besides being touch-enabled. Focusing and a lot of other functions can be controlled from that LCD. With a powerful 5-axis VCM (Voice Coil Motor) image stabilization which compensates up to 5.0 steps of shutter speed for one of the world’s highest levels of compensation performance, allowing, says Olympus, “users to capture clear images of night scenes and other low light situations with minimal noise, without raising the ISO.”, the PEN-F also offers High Res Shot Mode, to capture 50 megapixel equivalent images that reproduce incredible subject detail in ultra-high resolution, perfect for architecture and still life work. Plus, Olympus Viewer 3 Ver. 2.0 image editing software has been updated to process High Res Shot RAW images. 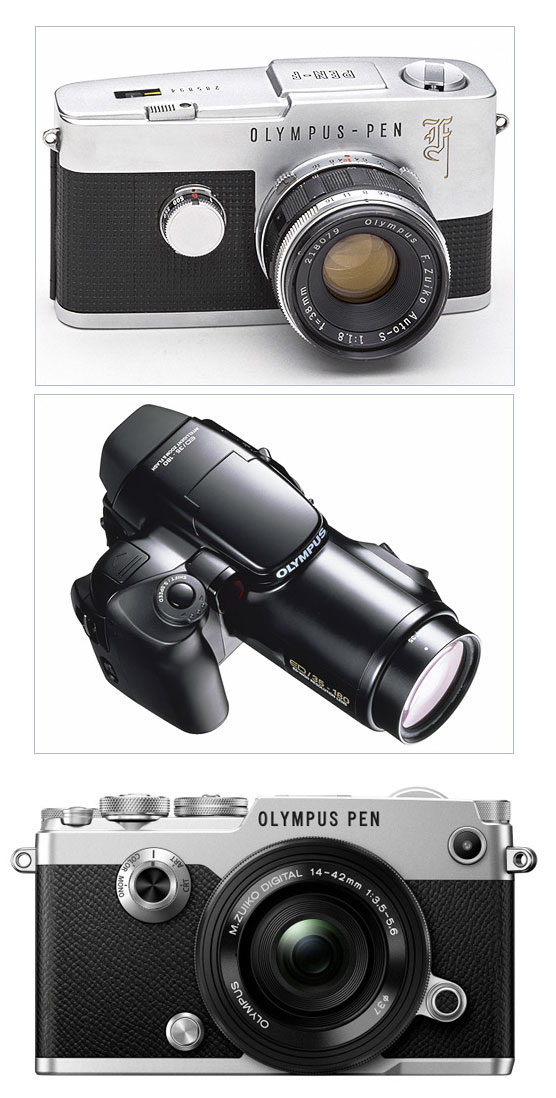 A little about ergonomics

So, this is the new camera from Olympus. It’s not exactly new, one could say, as most of the specifications are inherited from the OM-D E-M5 II, while in terms of body we’re definitively looking to the past, with a design that goes back to the original PEN-F. That’s an interesting point that makes me go back to the drawing board and ask if we’re longing for the style and functionality from the old days.

Before we continue, let me mention that the original PEN-F was a SLR, while this new PEN-F is presented as some kind of rangefinder camera – Olympus marketing states “Rangefinder style cameras were all the rage in 1963.” – so there really is no continuity line between the two, besides some cosmetic similarities. The original was a half-frame, meaning that the camera used an 18×24 mm vertical format, producing twice the pictures on a roll of 135 film as the regular 36×24 mm format. The smaller image format also allowed for a smaller camera and lenses, making the PEN-F system one of the smallest SLR systems ever made. So, years ago Olympus showed us it could be done. The original PEN-F was also revolutionary at its time, using a rotary focal-plane shutter, contrary to the usual two-curtain focal-plane shutter present in SLRs. It meant the camera could synchronize to electronic flash at all shutter speeds. The PEN-F was a great little SLR from the Sixties!

Olympus is not the only camera maker going back to old designs in modern bodies, so I wonder, if everybody is really so happy with all those buttons, knobs and dials, if the word “ergonomics” is not to be used anymore. Throughout the 1990’s, with plastic molded bodies, we were told that the roundness of shapes and the new “press multiple times to get to the function you need” buttons were the future, offering better handling than the clunky box models filled with knobs and dials from our earlier years. Now dials and knobs seem to be the new fad. 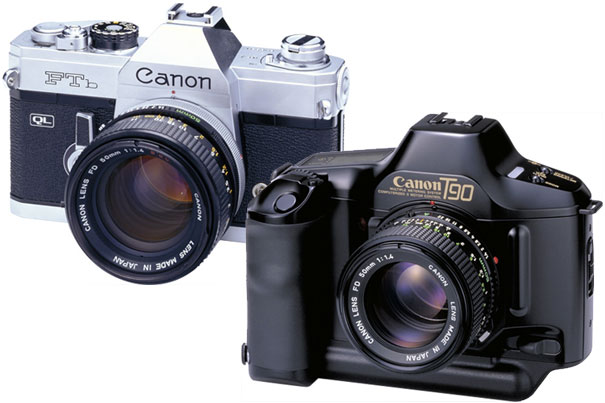 Coming from Canon FTb bodies, followed by the A-series, I totally enjoyed the rounded handgrip and body, when I got my T90, the last FD lens system camera, which was the model for the EOS series launched afterwards. I do believe, after many hours of holding my cameras, that the new shape helped to make it less tiring to handhold cameras, especially when using long lenses, as I many times did/do. Still, I do like to hold one of my old Canon’s, a FTb body with metal 35mm lens, I’ve on the bookshelf, just to remind me of my origins. There is a kind of magic to touch the metal, feel the knobs, hear the timer run. But then I go back to real life…

The search for better ergomonics led Olympus, as many other brands, to go from the original PEN-F, from 1963, to the L-shaped IS-series, from 1990 (see illustration on this page). Now, some 26 years later, we’re, it seems going back to the roots, throwing all the theory about ergonomics away, if all that we were told before was true. Was it?

To put it simply, let me use a brief explanation about ergonomics: “of two cameras, the one which can be operated with the fewest, least complex actions has the better ergonomics.” Ergonomics is all about actions, and the best and most comfortable way to use the tools you hold is, I presume, the “best ergonomics”. I am not discussing if the new Olympus PEN-F is good or bad – I’ve not even touched one! – but stating that if the way it is built follows concepts from the 1960’s, then maybe it is done the wrong way, as many other cameras these days. Else, all the “science of ergonomics” is… a lie or a fad of the nineties of the 20th century.