The birth of a display device

About the only thing OLED has in common with LCD and plasma is that it’s a flat panel display with sub-pixels for Red, Green and Blue.

NAB attendees are generally well advised to stay away from dark alleys. But we can make an exception when the alley in question is the side aisle of Sony’s massive booth and the reason for low ambient light is to show off a new monitor, the PVM-740, Sony’s first professional monitor with Organic LED (OLED) display technology. In a particularly nervy head-to-head comparison, the new 7.4-inch monitor (viewable area, measured diagonally) was shown next to a comparably-sized BVM Series CRT monitor and a third-generation LCD model. The comparison, as they say, was no comparison. OLED has arrived.

Performance that will spoil you for anything else

The PVM-740 has a picture that will rivet the attention of even the most grizzled industry veterans. Here in one place is the resolution, brightness and flat-panel gee-wizardry you associate with LCDs, combined with contrast and black level beyond anything you knew and loved from the golden age of CRTs.

Sony’s Gary Mandle guides you through the latest display products at NAB 2010, including the OLED-based PVM-740.

Organic LEDs are semiconductors made of organic chemicals, the same stuff as living things. Sony’s first foray into large-scale OLED video display was the XEL-1 LED television, an 11-inch consumer model (viewable area, measured diagonally) followed by the HDVF-EL100 professional viewfinder. OLED develops phenomenal black because each pixel is a semiconductor that, when switched off is completely off. There’s no bias current as with CRTs. There’s no leaking backlight as with LCDs. Even when parts of the screen are bright, adjacent parts can be completely black. At NAB, Sony had the confidence to demonstrate the PVM-740 head-to-head against a BVM monitor with city-at-night shots of skyscrapers and dramatically lit bridges against a deep black. The winner was OLED.

OLEDs also switch brightness values with effortless speed, unlike LCD crystals which need to twist and untwist in a viscous fluid. Unlike plasma displays, which can be prone to comet-tailing, OLEDs pixels can go dark just as quickly as they get bright. This was also featured at NAB, where Sony ran some crazy fast high-contrast text crawls across the screen. The razor sharp performance of the OLED said all you’ll need to know about its panel switching speed. The PVM-740 isn’t afraid of anything.

The PVM-740 shares several enabling technologies with the XEL-1. Chief among them is a Sony design with the unlikely name of Super Top Emission™ OLED. To seal the OLED material from oxygen, the conventional structure forces light to exit down, weaving its way through the mesh of thin film transistor driver circuitry. Sony’s design enables light to emerge from the top. Because no light is blocked by transistors, the image is remarkably bright. 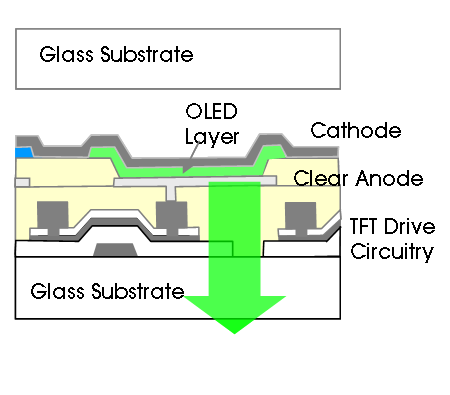 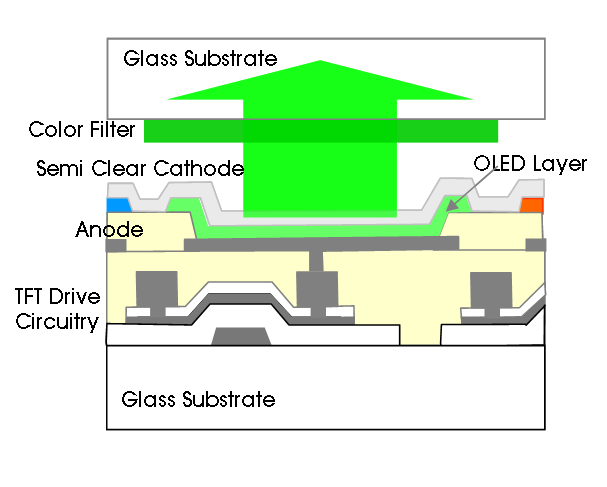 Professional Sony watchers will notice variations on a recurring theme. The Super Top Emission structure does for displays what the Exmor™ R back illuminated CMOS design does for camcorders. Both turn a conventional structure upside down to greatly increase light efficiency. 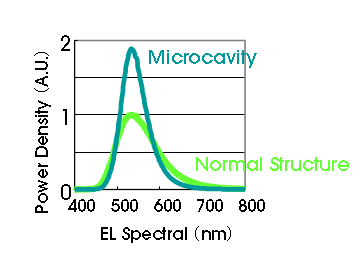 Without microcavities, the normal structure has a lower peak output and wider spectrum. The internal reflections of Sony’s microcavities narrow the spectrum and boost output at the desired frequencies, to increase brightness further still.

Before we get too carried away

So is the PVM-740 the answer to all our display prayers? Not quite all of them. The current state of the art in OLED manufacturing limits Sony to relatively small screens. That’s why the company chose to debut the technology on a 7.4-inch screen (viewable area, measured diagonally). Resolution is quarter HD (960 x 540), which is comparable to LCD screens of this size. And while the OLED screen is far more resistant to burn-in than CRTs ever were, it’s still not the best choice for hour after hour of static images, as in public displays.

All told, the PVM-740 is a complete performer. So if OLED technology isn’t on your radar yet, it should be. And if you haven’t yet seen the Sony PVM-740 in action, you owe it to yourself to check it out. You’ll have a new personal benchmark of just how good a digital picture can be.