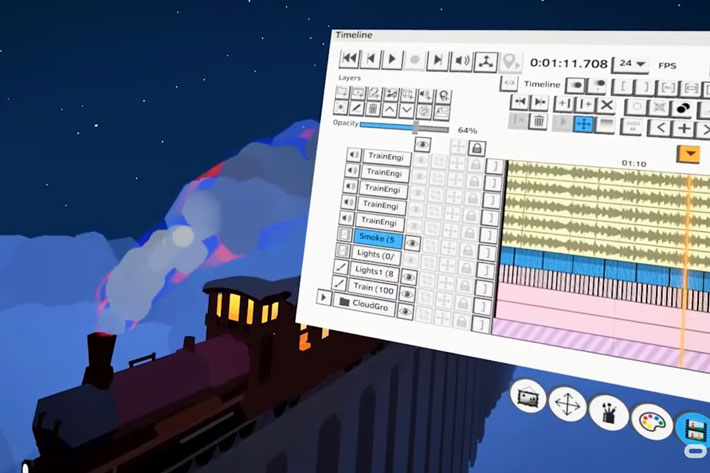 Born out of the creative needs of an Emmy-nominated VR film, the painting and animation tool Quill has reached version 2.0 and is now an end-to-end solution for making full VR-native animated stories.

Oculus announced this month the release of Quill 2.0, the new version of its painting and animation tool launched in 2015. Born out of the creative needs of Dear Angelica, an Emmy-nominated VR film with the vocal talent of Geena Davis and Mae Whitman, whose story required it to be painted and shaped entirely inside of VR— something that had never been attempted before, Quill evolved into a mature VR painting and animation tool for creators.

Dear Angelica, which premiered at the Sundance Film Festival in 2017, continues to be one of the key titles to understand the potential of Virtual Reality to tell stories. Produced by the Oculus Story Studio entirely in Quill and Houdini, and played in the Unreal Engine in real-time VR, the movie can be watched for free in the Oculus Store and is an essential title to add to anyone’s collections of VR best-sellers. 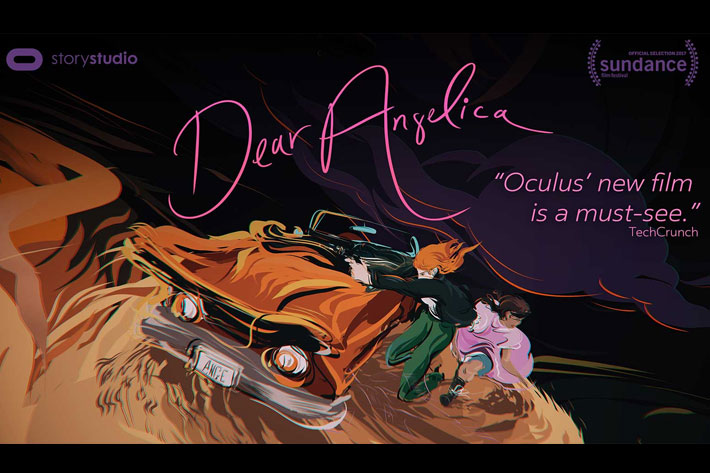 Dear Angelica represents a pioneer experience, whichever way you look at it. A narrative of grief, loss and love, Dear Angelica plays out in a series of painted memories — a visually stunning technique that increases our empathy for Angelica’s daughter as we’re fluidly pulled through her imagination to experience her adventures and poignant recollections. To execute such a magical piece, a team of technical artists, engineers and artists were put in place during a few months of production. Today Quill is more powerful, and the same can be achieved with fewer people, but much of the process and pipeline setup still applies.

Art Director Wesley Allsbrook painted every single scene in the film entirely by hand — each character, set and prop realized by a single artist. This is a significant moment for animation, whether based in VR or otherwise, as the field heavily relies on increasingly large teams of concept and production artists. Dear Angelica sheds light on an alternative, more accessible way to tell visual stories. And that leads us to Quill 2.0,  which receives what Oculus considers a “revolutionary update” that transforms the tool into an end-to-end solution for making full VR-native animated stories. 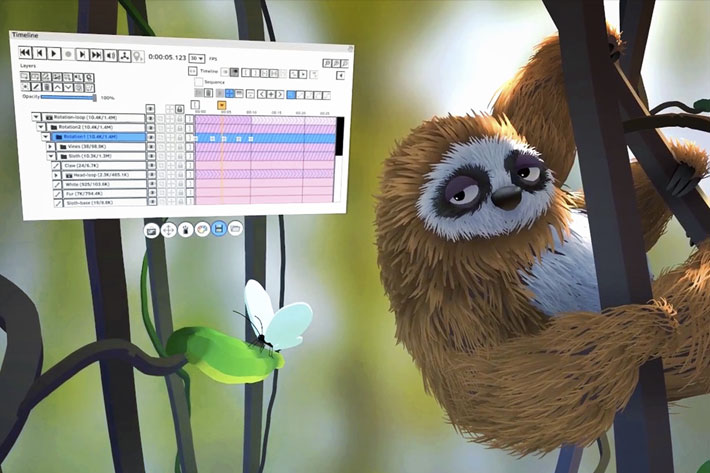 From initial concept to finished project in VR

Quill has evolved since its launch, and, according to Oculus, with the introduction of 3D animation support in February 2018, over 68% of all published 3D illustrations and animations (aka #Quillustrations) have been narratives clips. With Quill 2.0, storytellers can now become full-fledged VR directors, in addition to creating 3D painted scenes and short animated loops. Quill 2.0 empowers professional artists to create entirely in VR on an infinitely scalable canvas.

The addition of a new animation timeline, with this update, transforms Quill into a powerful tool for building narratives. Storytellers, Oculus says, “are often forced to switch between tools at various steps in the narrative process. A typical project might include storyboarding, modeling, surfacing, rigging, lighting, and all kinds of rendering, each with their own specialized tool. With Quill’s new Animation Timeline feature, storytellers can sequence narratives, synchronize animations to sound, create transitions between shots, and much more. Storytellers now have everything they need to create long-form VR narratives, all in one tool.”

It’s not just that. Quill also saves time and resources by avoiding file transferring and the need to learn new software. Most importantly, it lets storytellers go from initial concept to finished project in the most efficient and accurate way possible. In traditional animation pipelines, things can often get lost in translation with each step of the production process. This happens as subsequent steps become increasingly abstracted over time. With Quill 2.0, the concept becomes the finished piece as storyboards seamlessly transform into final animation. 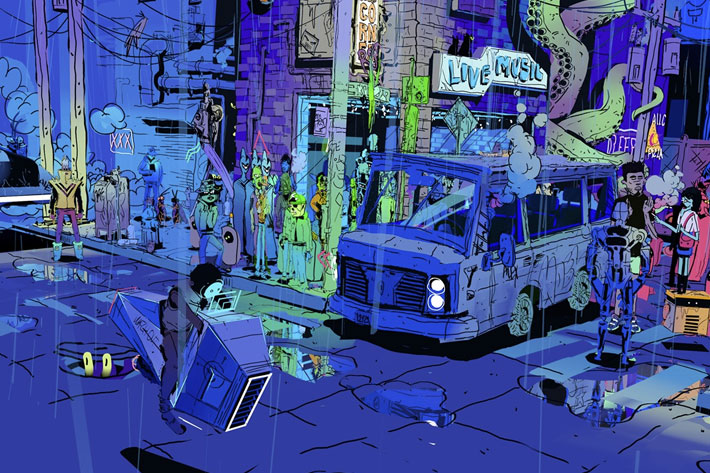 Additionally, Quill leverages the unique affordances of VR by taking advantage of spatial interaction. This lets creators effortlessly navigate the app, then paint and animate with physical movements. Here are some of the new features included in Quill 2.0:

New to Quill 2.0’s Animation Timeline are transform and opacity keyframes. You can now set keyframes for transformation and opacity values while also adding interpolation between them. Keyframes can be set for any layer type including: paint, audio, image, and 3D model layers. Groups and Sequences can also be keyframed, allowing for complex nested animations.

For example, you could animate a layered van with rotating tires and smoke in a group, and then animate the whole group down a street with a couple of transform keyframes. This lets you make adjustments to the group’s nested layers without affecting the overall group’s transformation. Previously, you would have to utilize frame-by-frame animation to transform the van. Although frame-by-frame is great for some use cases, it’s not necessary for simple transformations. And since keyframes only store values, this new feature greatly reduces file size. Bonus!

Stops are a new concept, native to VR animation, that let the main story action pause while keeping the supporting scene alive. In VR storytelling, there are infinite paths and camera angles. Stops let you explore at their own pace while the VR-specific loops continue to play, helping you discover every detail the creator lays out—and giving you the agency to choose when to continue the main story. This powerful feature opens a new avenue to interactive storytelling for a more immersive viewing experience.

With Quill 1.0, we launched spatial audio support to enhance immersion in Quill scenes. Creators could import and position audio files in 3D space, so you could hear birds chirping from the treetops and music coming from a coffee shop down the street.

Now with Quill 2.0, we’ve added directional sound emitters in cone and pyramid shapes. This lets creators build scenes with complex audio needs. The audio files can also be animated. Imagine the sounds of cars whizzing by or talking characters walking down a street.

Additionally, Quill 2.0 now displays wave forms within each layer in the Animation Timeline. This is especially helpful when building complex animations like lip-syncing or musicians playing a song’s specific rhythm. 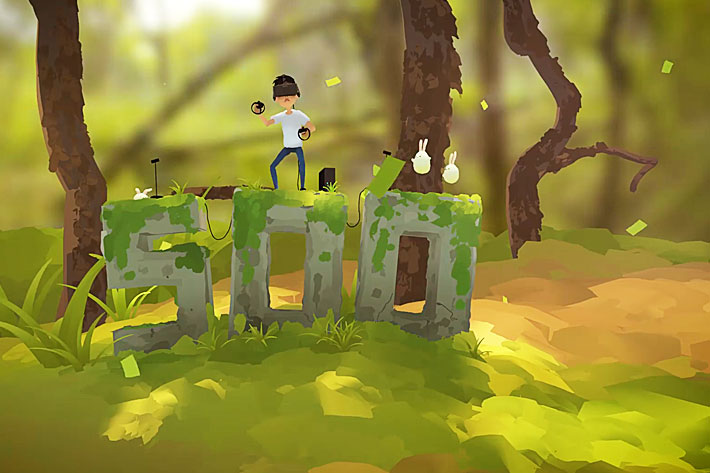 The work of Goro Fujita

Available for free with Oculus Touch activation on the Rift Platform, Quill continues to be wrongly considered by many as another game or simple painting VR app, but the #Quillustrations created and shared by users since it was launched show what is possible to create with the tool. One name is key to understand that potential: Goro Fujita. The artist, who joined Oculus Story Studio in 2014 as art director, stayed with Facebook’s Social VR team when the studio closed, in 2017. Fujita celebrated the launch of Quill 2.0 with the release of his 500 daily Quillustrations, all painted and animated in VR using Quill.

Goro Fujita, a former visual development artist at Dreamworks, has over 10 years of professional experience working in various fields of the entertainment industry such as animated movies, commercials, children’s books, book covers, mobile games and Virtual Reality. His experience with Quill, and the examples he has created, demonstrate the potential of the tool. As Oculus says now, introducing Quill 2.0 “VR-native narratives built with Quill are helping to define an exciting new medium. We can’t wait to see what you create!”

Oculus Quill 2.0 is available for Oculus Rift and Oculus Rift S. Although Oculus suggested the tool will be available for other headsets within the Oculus universe, the hardware needed to run the software may limit how this professional tool can work on non-tethered headsets.