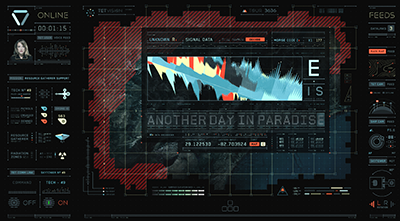 Tom Cruise stars in this original and groundbreaking cinematic event from Joseph Kosinski, the visionary director of TRON: Legacy and producers of Rise of the Planet of the Apes. On a spectacular future Earth that has evolved beyond recognition, one man’s confrontation with the past will lead him on a journey of redemption and discovery as he battles to save mankind.

Munkowitz says the speed and accuracy in CINEMA 4D enhanced the overall workflow in helping the team create Vika’s (Andrea Riseborough) light table, one of the most widely seen graphic elements inOblivion that functions as a central briefing center providing critical information to assist the characters with their duties on Earth. Comprised of four screens, the light table features a main map used to monitor the position of the Bubbleship; the helicopter-like vehicle that Jack Harper (Cruise) uses to travel to and from Earth; Scav (alien scavengers) and drone positioning; drone monitoring to track key vitals and fuel stats; a hydro rig monitor that displays the collection progress of water resources; and a weather screen for monitoring changing climate conditions. The team also designed and animated all of the HUDs (heads up displays) for the film’s multiple futuristic machines and weaponry.

“CINEMA 4D was extremely helpful in the creation of a variety of audio responsive graphics and light table assets,” says Munkowitz. “Its speed and MoGraph feature set were paramount in taking Kosinski's graphics briefs and executing them quickly with precision, and establishing a consistent graphic language rarely seen in big budget sci-fi films. No other tool is as prepared for intensive motion graphics as CINEMA 4D.”

Lewandowski adds that many of the 3D animated assets in Oblivion were built using CINEMA 4D then composited in Adobe After Effects and displayed in monitors or put into screens. Many of these elements were used in Vika’s light table. These included the maps and weather screens, and also emphasized several story elements central to the film’s plot such as the Rogue signal sequences in which multi-colored rotating strips of pyramids helped identify Scav signal feeds; a Morse code sequence Harper uses to communicate to the sky tower when he’s in danger; and the DNA bio trail that helps Vika’s console identify fragments of Harper’s DNA.

“Even when creating graphic elements that end up on a flat screen, CINEMA 4D’s user interface and fast rig creation proved most powerful in generating futuristic and original animation quickly and with a small team, often just one artist,” says Lewandowski. “One of my favorite moments in Oblivion is when the light table boots up as it showcases the visual integrity of our designs and animations as a central ‘character’ in the film.”

“One of the most important aspects of working on a film is to give the director choices,” Parker adds. “The interactivity in CINEMA 4D's MoGraph system allowed me to quickly animate many individual molecules as they assemble into a DNA helix. Once the initial sequence was animated, it was an easy task to show the director variations and make any necessary adjustments.”