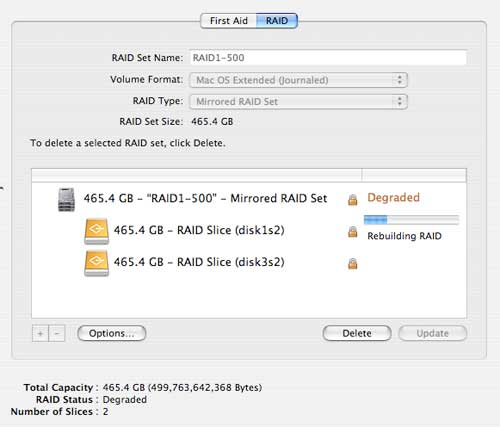 What results from not having both eSATA cables properly plugged in at startup time.

All hail the progress of inexpensive CE (Consumer Electronics) and IT (Information Technology), and the cost benefits they bring to production! Unfortunately, they also bring some gotchas, like a plethora of non-locking connectors. Most us have probably struggled with the diminutive and easily-disturbed four-pin FireWire connector, and who hasn’t had a 1/8-inch stereo audio miniplug unplug itself at some point?

But the threats I’m here to discuss are even more insidious than these: ExpressCard34 slots, and eSATA cables.

I have a MacBook Pro into which I plug one of two ExpressCard34 devices, a Duel Adapter for reading Panasonic P2 cards, and an Apiotek dual eSATA II controller, which I use to connect an OWC dual SATA drive enclosure stuffed with two 500GB drives, configured as a soft RAID using OS X’s built-in support.

Now, when I use the ExpressCard34 slot for Sony SxS cards, it works just fine: I pop the card in and push it in until it clicks. After transferring data and ejecting the card from the Desktop, another inward push toggles the hardware ejection spring, and the card pops out.

The same physical operations install and eject the Duel Adapter and the eSATA adapter, but unlike SxS cards, these devices stick out from the Mac. The Duel Adapter has a fat, hardwired cable with a PCMCIA card reader at the end, and the eSATA adapter has a pudgy lump into which two eSATA cables are plugged. The trouble is that there’s nothing aside from connector friction holding ExpressCard34 adapters in place, and it’s very easy to pull them out by accident, or just bump them and loosen them. Mass-storage devices, like P2 cards and RAIDs, really don’t like to be disconnected this way, and file-system corruption and data loss can easily occur.

My fix is to gaffer-tape the danged things in place. There’s plenty of space on the top deck of the MacBook Pro to lay a strip of tape, thanks to Apple’s infuriatingly lame use of a 12″ keyboard on a 15″ machine [1], and there’s space below, too, so a couple of criss-crossed strips of tape wrapped around the base of the Duel adapter (or the sides of the eSATA controller’s sockets) and then stuck to the computer will secure the things.

Ah, but eSATA cables, now, they’re just downright evil. eSATA cables plug in with a simple friction fit; there are spring-loaded fingers in the connector shell designed to retain the plug, but they’re no more effective than the similar fingers in an HDMI socket (a friend calls HDMI plugs a “self-ejecting” technology). Furthermore, an eSATA cable doesn’t have to be unplugged very far before it loses connection, so a quick visual check often isn’t good enough to verify proper plugging. I haven’t unplugged a cable by accident when my eSATA RAID is running, but on a couple of occasions I’ve not completely plugged in both cables all the way when setting the thing up, or I’ve jostled a cable slightly loose while repositioning the system on a table.

I’m lucky: I’ve got my RAID configured as RAID 1 (mirroring). What happens to me when I haven’t double-checked my eSATA cables is that the RAID comes up damaged, but repairable once I push the errant cable fully home. The rebuild takes an annoyingly long time, but at least I’m given the opportunity to reflect on the error of my ways, and vow to check my connections better the next time. If I had my RAID configured for RAID 0 (striping) instead, I’d probably be out of luck, and I could kiss my data good-bye.

If you’re running any sort of cable-per-drive RAID (such as the Sonnet Fusion F2, or something similar to my homebrew rig), it really pays to double-check connections by manually reconfirming that all cables are pushed fully in before firing up the system.

If you’re looking for a new external SATA RAID for location use, it’s probably worth considering one with port multiplication capability, so that a single eSATA cable connects the RAID to the computer. That way, if you unplug a cable, the RAID goes away, and has less chance of corruption from a single disconnected drive.

[1] All Mac portables use keyboards that neatly fit the discontinued but much-loved 12″ Powerbook, no matter how much real estate the laptop affords. These compact keyboards lack dedicated PgUp, PgDn, Home, and End keys, so those of us who actually use keyboards for real work are always having to press the danged Fn key to get to these frequently-used functions. For a company that’s made its reputation on design and usability, this is criminally negligent. Haven’t they ever seen an IBM/Lenovo ThinkPad keyboard, fercryinoutloud? Oh, don’t get me started…

If I’m not working in the camera department or as a project manager/producer, I often get asked to work...