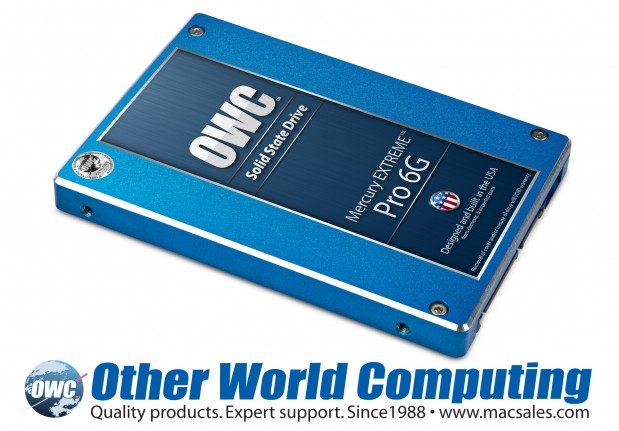 Three Capacities Offered Starting At $319.99
The OWC Mercury Extreme Pro 6G SSD will be offered in the following capacity configurations with availability dates to be announced on the product’s official release date of April 15th:

These three new models join OWC’s existing line of SATA 1.5/3.0 interface Mercury Extreme Pro SSDs that are available in capacities from 40GB to 480GB, offer options for ‘legacy’ IDE/ATA desktop and notebook owners, and offer the only MacBook Air SSD option on the market priced starting from $99.97. For more information on the complete line of OWC Mercury Extreme Pro SSDs, visit: http://eshop.macsales.com/shop/SSD/OWC/

Preliminary Testing Reveals Gains Up To 77%
To determine the true capabilities of the SandForce SF-2281 processor in a 6Gb/s interface computer, the OWC Mercury Extreme Pro 6G was Quickbench tested by OWC engineers in a 2011 MacBook Pro 15″ i7 2.3GHz model. With 506MB/s read and 464MB/s write transfer rates, the new Pro 6G SSD offers up to 77% faster performance in 6Gb/s interface equipped Macs and PCs versus 3.0Gb/s interface equipped machines. In the critical 4K random read and write tests, up to 60,000 IOPS – an improvement of 20% – is attainable. These cutting edge speeds dramatically improve the performance of demanding uses such as High Definition video streaming, large Photoshop file rendering, as well as other disk intensive processes that bog down standard SSDs and hard disk drives.

Full Specification Listings Highlights Quality Difference
Continuing its commitment to ethical business practices, OWC lists a full array of detailed specifications for each SSD model, so that every customer, from typical everyday users to IT level professionals, is able to quickly and easily determine the quality difference with which every OWC Mercury Extreme Pro 6G SSD is built.

“We’re very pleased to have four of the best performance testing websites ready to put our latest and greatest SSD through its paces,” said Larry O’Connor, Founder and CEO, Other World Computing. “We’re quite confident that these experts will find the Extreme Pro 6G to be the new speed, reliability, and quality standard of SSD by which all others will be measured.”