Apple has meeting offsite but their products had a huge presence on the show floor. 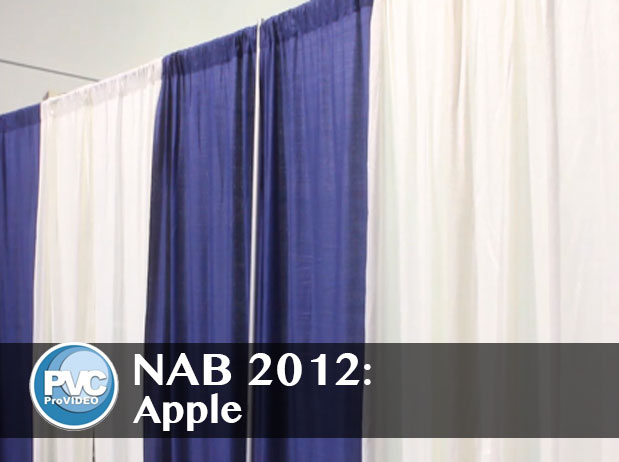 Apple didn’t have a booth at the 2012 NAB show, and no one expected them to. Even though no one was surprised they weren’t there a lot of folks commented that they thought it would’ve been more appropriate than ever given that Apple now has a shipping version of Final Cut Pro X. But Apple’s presence was felt all over the show floor with tons of Apple products on display. They were even having on the record meetings off the show floor and I was lucky enough to be invited to one of them.

By now we all know what those meetings were about. Larry Jordan got the scoop by announcing a couple of the upcoming features that Apple was talking about. Philip Hodgetts has written a blog post about some of the Final Cut Pro X installation numbers Apple was touting. He wrote a nice article but the real meat is down in the comments below. Reality distortion field? You decide.

I don’t have anything new to add other than my own two cents. It’s great to see Apple again announcing upcoming features for FCPX. This is the second time they have done just that. I was most surprised to see the mention of “dual viewers”. I would take that to mean a source/record or viewer/canvas type editing option. Personally this is something I would welcome but I wouldn’t bet on FCP X returning to FCP7’s interface anytime soon. Apple said that they aren’t going to implement old features unless they can do them better; case in point multicam. This is a good thing and I said to Apple that if they can improve upon the old source/record type of editing then I welcome that with open arms. I can’t wait to see what they come up with.

One specific thing I asked about is why the Mac app store is so superior to the old software update way of delivering the versions. In fact they seem quite similar to me: turn on the Mac one day and you see an update in the App Store. Turn on the Mac one day you see an update in the Software Update preference. Click a button and they install. The answer was that it seems to be more of a licensing issue than a technical issue so I guess that makes sense. I take it to mean there’s some crazy regulation that doesn’t allow publicly traded companies to offer feature updates for free. At least that’s how I took the answer. Who knows what that threshold is. And while Apple deferred the question of whether Adobe could put the Production Premium suite in the app store they did seem very proud of the upcoming Mountain Lion options for different types of security for third-party software developers. These options seem to me like a commitment that Apple is not going to require everyone to eventually use the Mac App Store and this is a good thing. Choice is a good thing.

I specifically asked about the future of the Mac Pro tower but of course got no comment. Vendor after vendor on the NAB show floor seemed worried about the same thing: is the Mac Pro going away? There were lots of iMacs running demos but you can bet it wasn’t by choice for many of the manufacturers. It wasn’t Autodesk’s first choice to retool Smoke for Mac 2013 to better run on Mac Minis and iMacs, they are just hedging their bets. And I can guarantee you they’re looking into what it would take to port Smoke 2013 Windows.

One comment I made on Monday of the NAB show was that I didn’t see an awful lot of Final Cut Pro X on the show floor. After looking closer for a couple more days there were more Final Cut X installs than I realized. I think many people were happy to see Sony showing a version of their XDCAM importer running on Final Cut Pro X. 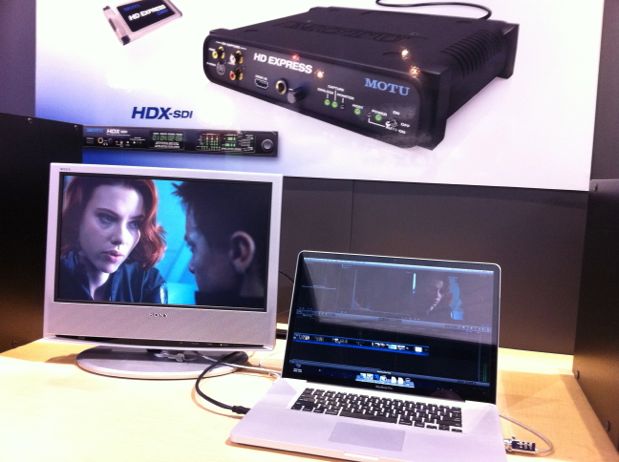 And while there were a number of Final Cut Pro X installs running there were still a lot of Final Cut Pro 7 machines being shown on the show floor. I also saw more Avid Media Composer on the NAB show floor than I had ever seen before. And there were a surprising number Adobe Premiere Pro CS6 installs working. These days there really is and an NLE for everyone. Choice is a good thing. 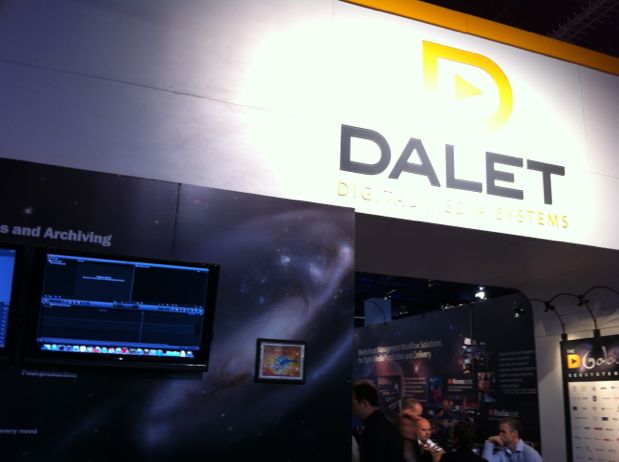 This FCPX install was at the Dalet digital media systems booth.

Thunderbolt had a huge presence on this year’s NAB show floor, and we can thank Apple for that. I have been a bit of a Thunderbolt skeptic but seeing it in operation in a number of different scenarios and seeing how fast you can transfer data I can see now that it is a very cool technology that we are going to greatly need in the world of 4K but I still believe that a lot of editors and most post houses still need the flexibility, expandability and sheer horsepower of a Mac Pro. Built-in Thunderbolt would make it perfect. The new rumors of the death of the 17 inch MacBook Pro sure doesn’t make “pros” feel any better about the future of their favorite platform. As I said before: choice is a good thing. There’s some pretty powerful new Dells and HPs I hear. 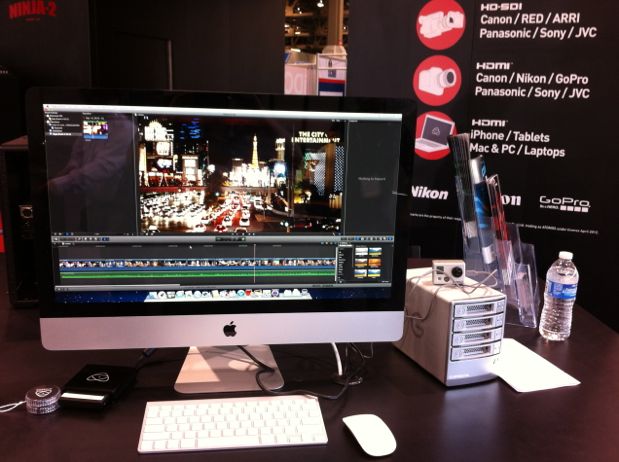 I can’t remember which booth had this FCPX demo running.

And if you’re wondering why the main image in this post is of blue and white curtains then take at look at this great NAB 2012 video from Little Frog in Hi-Def:

The Edit Bay – an unexpected journey from FreshDV on Vimeo.