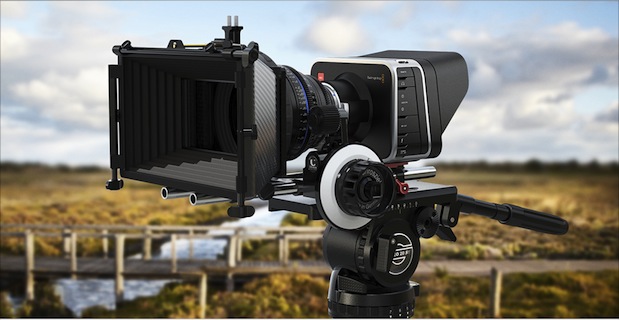 As some of my colleagues at ProVideo Coalition magazine have already reported, at NAB 2012, Blackmagic announced its first digital motion picture camera, officially known as the Blackmagic Cinema Camera. For US$2999, Blackmagic gives you the camera, a license of DaVinci Resolve (US$995 value) and a license of UltraScope (US$695 value). Supply your own Canon EF or Zeiss ZE lens and recording media. I applaud Blackmagic for making one of the two best possible decisions regarding the formatting used on the removable SSDs (solid state drives), and for using standard códecs/file formats. Unlike what many traditional photo and video camera manufacturers have chosen to implement (the weak FAT32), Blackmagic chose to use HFS+ (aka HFS Plus or Mac OS Extended). In this first look, I’ll review the differences and advantages of either HFS+ or UDF over FAT32, and point out some other details, i.e. the audio connections and file formats.

FAT32 versus HFS+ or UDF

A short explanation about the weaknesses of FAT32 compared with HFS+ or UDF via an excerpt from my recent Open letter to camera pro AVCHD camera manufacturers:

FAT32 dates back to the mid 1990s and limits the maximum file size to a little under 4GB each, which forces (the camera) to create sequential files for long clips, which is a mess! I applaud AJA for choosing to use the HFS format in their KiPro and KiPro Mini recorders, and I applaud Sound Devices for choosing to use the UDF format in their PIX recorders. Both of these formats allow for much larger files, so long clips can be recorded in a single file per clip. (Sony is already offering the option of using UDF formatting with some of its higher-priced cameras.) You (the pro AVCHD camera manufacturers) could have used either HFS+ formatting (which is standard on the Mac, and can cost between US$25 and US$50 for a utility to read/write on Windows) or UDF formatting (which is compatible off-the-shelf with both Mac and Windows) and as a result you could have recorded the H.264 files one-per-clip (no multiple sequential files per long clip)…

Unlike the practice of many traditional camera manufacturers -who often invent an obscure new file format, which initially makes it impossible to be ingested properly into software editing programs while the developers scramble to update there programs, Blackmagic chose to use two standard códecs/file formats:

CinemaDNG is the result of an Adobe-led initiative to define an industry-wide open file format for digital cinema files. CinemaDNG caters for sets of movie clips, each of which is a sequence of raw video images, accompanied by audio and metadata. CinemaDNG supports stereoscopic cameras and multiple audio channels. CinemaDNG specifies directory structures containing one or more video clips, and specifies requirements and constraints for the open format files, (DNG, TIFF, XMP, and/or MXF), within those directories, that contain the content of those clips.

CinemaDNG is different from the Adobe DNG (Digital Negative) format that is primarily used as a raw image format for still cameras. However, each CinemaDNG image is encoded using that DNG image format. The image stream can then be stored in one of two formats: either as video essence using frame-based wrapping in an MXF file, or as a sequence of DNG image files in a specified file directory. Each clip uses just one of these formats, but the set of clips in a movie may use both.

According to Blackmagic, when recording in raw mode, their Cinema Camera records all of the information directly from the camera’s sensor and is therefore capable of 13 stops of latitude.

The Tip-Ring-Sleeve connection has three conductors and is either used for balanced mono audio or for unbalanced stereo audio (i.e. with stereo headphones). Blackmagic configured it as balanced, and that’s why there are two such inputs on the camera: one for the Left channel and one for the Right.

The main advantage of balanced audio is that it rejects noise much better than unbalanced audio, especially at the lower microphone level, and especially at longer distances. Balanced audio is a way where audio is sent from one device to another in such a way that the audio signal is sent over two conductors (often twisted together, and often with a shield or braid as an independent ground) with matching impedance at the source and destination. The signal sent on each conductor is inverted in polarity. The balanced audio circuit is designed to measure the difference in voltage between the two conductors. Thankfully, electromagnetic interference will cause an equal noise voltage on each conductor, so the interference on each will cancel out, leaving only the original signal without the noise.

XLR connectors are sturdier and some can be locked in position, requiring the depression of a button to disconnect them. TRS connectors are less sturdy and can be inadvertently yanked by pulling a cable. Many XLR connectors contain a strain relief to avoid pulling the soldered connections inside. Then again, if you pull a cable that is connected via XLR hard enough, some element will eventually give in: either the cable will break, the strain relief will weaken or break (eventually yanking out the soldered connections) or the XLR plug will come out of its socket (despite its lock), in that order of probability. XLR is much more secure and resilient to minor pulls of the cable. However, it is clear the Blackmagic really needed to save space, so strain-relieve by looping the cable around the tripod or the camera’s optional handles (US$195 additional).

The concept is wonderful; the choices of formatting and standard códecs/file formats are also. Later we’ll see the image quality and performance, and I’m anxious to test the quality of the microphone preamps too. More to come…