Gearnex MoCo! Cranky sliders! The panto-jib! Throw the RED a dogbone! And more… 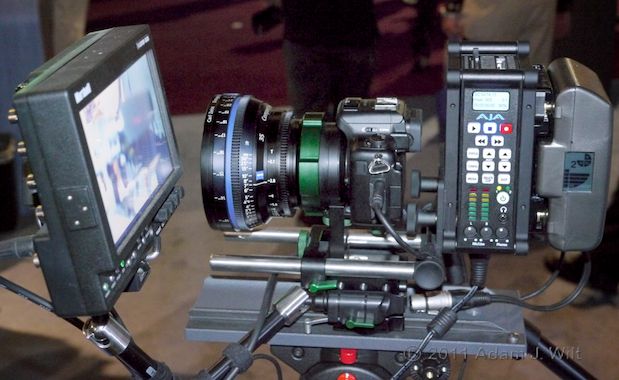 Yes, there’s actually a GH2 in there… somewhere… (grin)

Another NAB, and more camera support kit for cameras big and small. Here I look at just a few things that caught my eye.

(Let me state right out that I was shooting the show with a rig very similar to the one shown above. Except for the Hot Rod Cameras PL mount, the Zeiss CP.2 lens, the Marshall monitor, the support rods and baseplate, the AJA Ki Pro Mini recorder, and the Anton Bauer Dionic battery, my rig looked almost exactly like that: I had a Panasonic DMC-GH2 camera identical to the one shown here!) 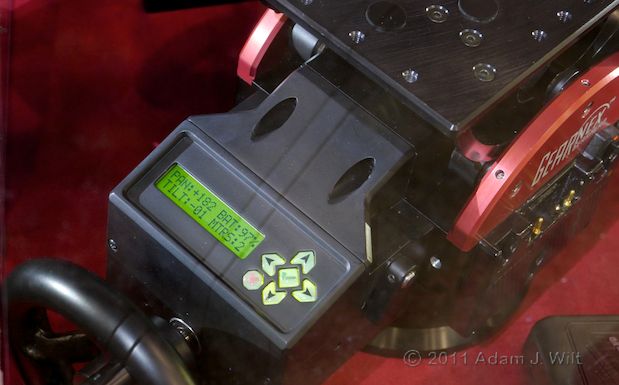 The Gearnex folks are building a MoCo (motion control) system for the Gearnex gearhead. It’ll be on the order of $10,000, and it’ll be usable with existing Gearnex heads. More details in this video from cameradepartment. 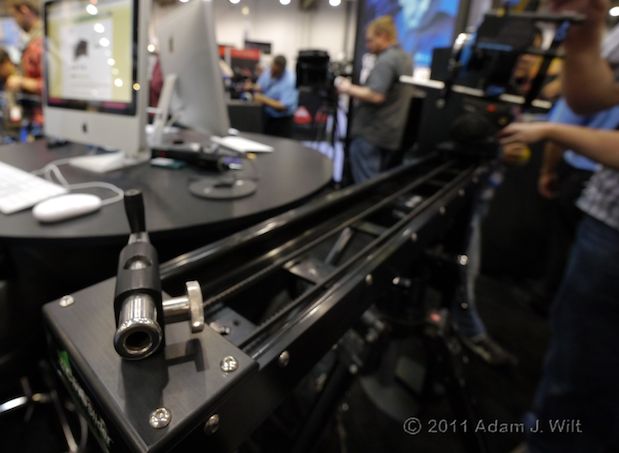 Kessler Crane has a range of sliders equipped with a toothed belt and a hand crank, allowing full control of slider action from one end of the device. Yes, they have motors available, too, including full memory MoCo systems. 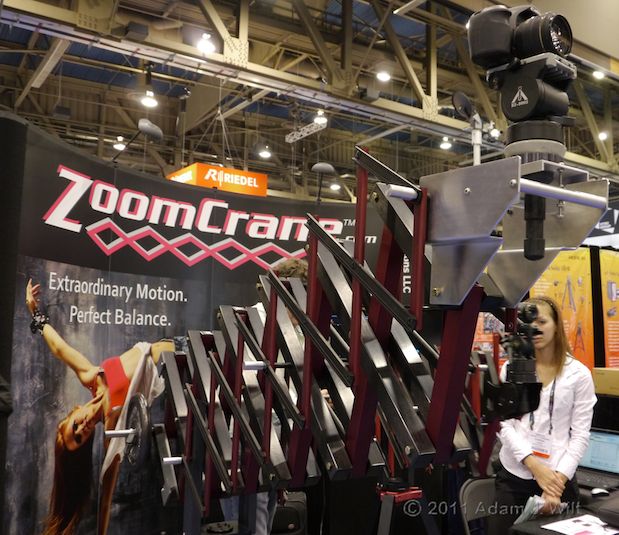 The Cineventions ZoomCrane is a clever device, a pantographic jib “arm” allowing the camera to fly close to or far away from the pivot point. The folks on the booth say they’ve had a RED ONE on it, so it’s not limited to DSLRs. The assembly appeared to use friction bearings, and it had considerable stiction; one might hope for roller bearings at all pivot points, but that would be a lot of roller bearings. As it is, it’s a great way to quickly and easily adjust jib “arm” length, though I’d hesitate to extend or compress it during a live shot. 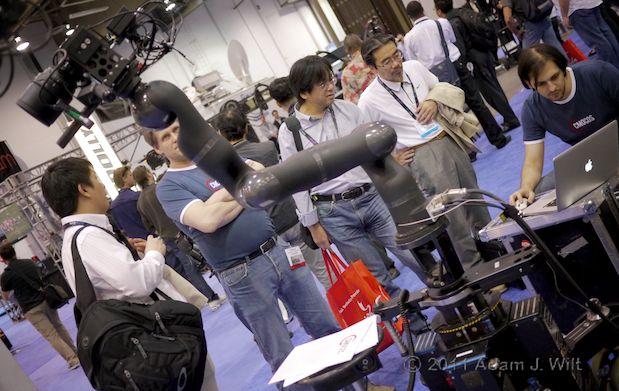 Another bit of fine German engineering: 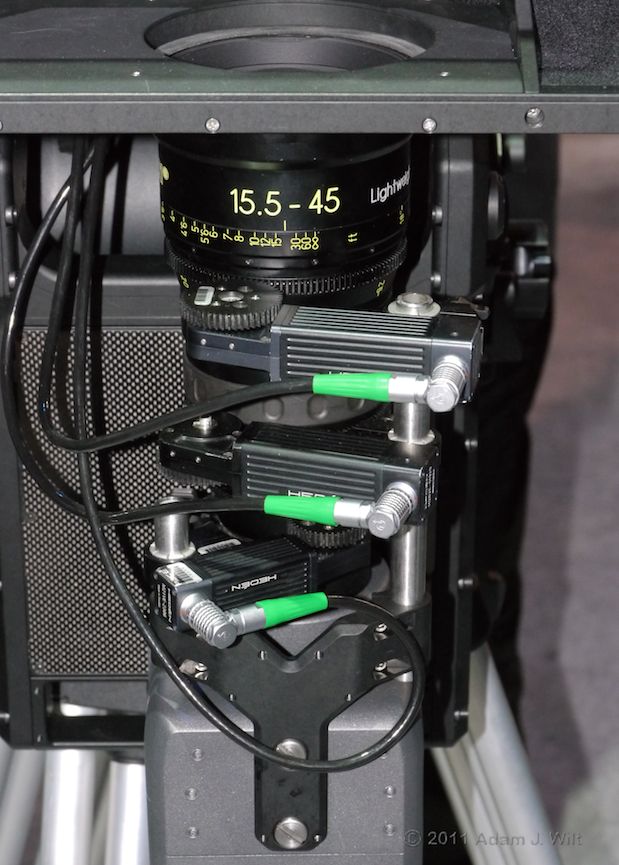 An elegant lens motor support arrangement on an Alexa M in a 3D rig.

Well, I don’t know if the motor support itself is German, but it’s of a piece with the precise minimalism of the Alexa M.

And finally, we saw what came of all the machine-shop experimentation visible at RED last September. 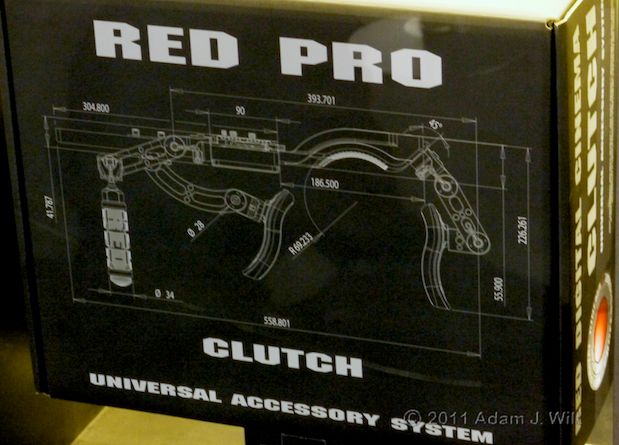 The “Clutch” kit, boxed up for sale… real soon now?

The “Clutch” kit is a box of selected tinkertoys to build up a handheld camera rig. 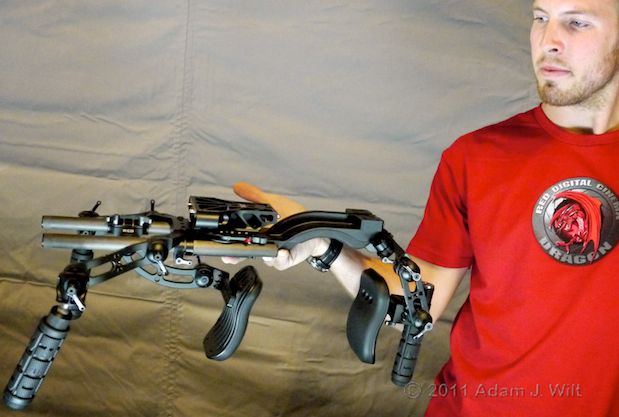 Pads for the shoulder, back, and chest, and handles wherever you want ’em; the rig sits firmly and comfortably atop/around your shoulder. With a camera on it, it’s a bit front-heavy but not unstably so; Art Adams mentioned that he’d like more padding on the chest pad, but both of us were impressed at how well and how comfortably the whole thing worked. 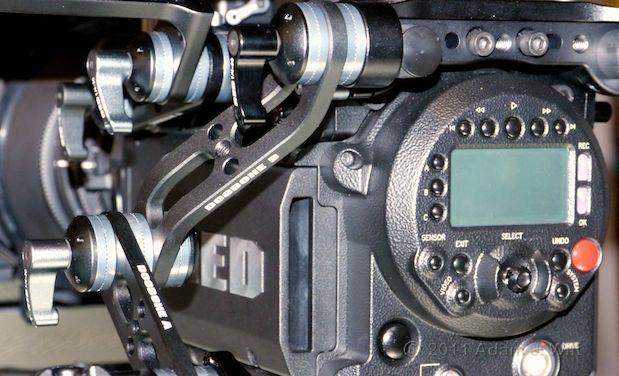 “Dogbone” links allow rigs to be built up.

There were other bits ‘n’ bobs that aren’t part of the clutch kit, like these round grip handles: 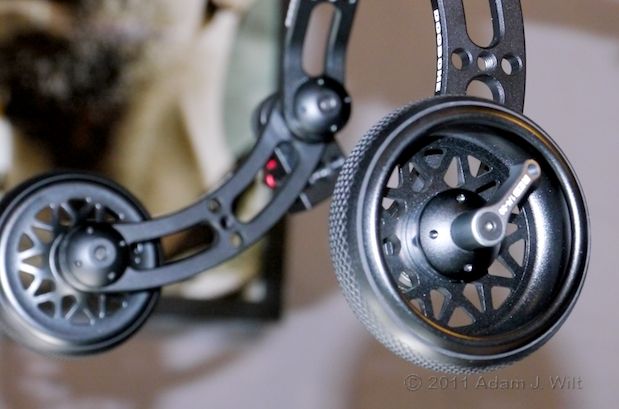 “Gear down and locked for landing!” Round handgrips from RED.

No, they don’t spin, which is a good thing for two reasons: (1) with them locked in place, you have much better control over camera tilt, and (2) if they did spin, the camera dept. would wind up having way too much fun playing tailwheel pilot on short final for a crosswind landing, with the inevitable occasional ground-loop, and the associated equipment damage and crew injury resulting therefrom…