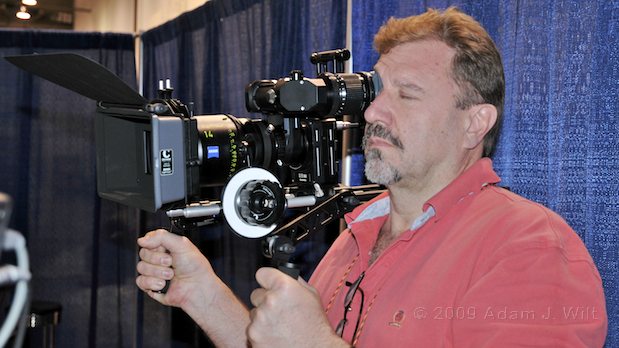 Today I was honored with a pre-show tour through BandPro‘s booth, where I saw many things, most of which I can’t discuss yet (more on them later tonight). What I can share is some images of the current Silicon Imaging‘s SI-2K digital cine cameras, like the ones used on “Slumdog Millionaire”.

The SI-2K is a 2K, Bayer-mask cine camera with a 2/3″-sized sensor and a universal lens mount: it can use B4-mount lenses like Zeiss DigiPrimes and DigiZooms, or larger PL-mount glass.

The camera is built around an off-the-shelf PC motherboard running Windows, but displaying a custom, full-screen UI on a touchscreen monitor, surrounding the preview display with touch-sensitive buttons as well as using the preview image itself as a tough surface. For example, if you turn on “Spot meter”, the camera displays a small square with a magnified image: merely touch the point of interest in the scene, and the magnifier moves on top of it, giving you both level readouts and critical focusing info.

As the camera is running on Windows, it can (and does) run a copy of Iridas SpeedGrade OnSet, allowing for full looks management including display LUTs. Looks can be imported from standalone copies of SpeedGrade, or built on-board with a full set of grading tools. How cool is that? 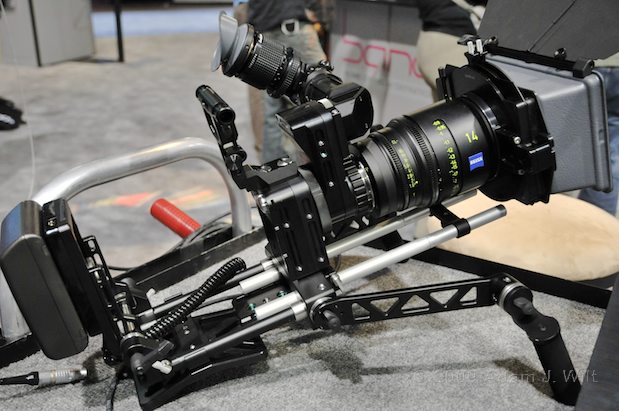 The SI-2K Mini, sitting on a taco cart

This spidery assemblage is the lightweight, handheld version of the SI-2K, the Mini. Only the sensor block of the camera is present in all that stuff; in the Mini configuration, an off-the-shelf laptop is used as the processing engine and cabled to the sensor block. The rest is all support rods, grips, carry handles, a Zeiss DigiPrime, and, between the sensor block and the lens… 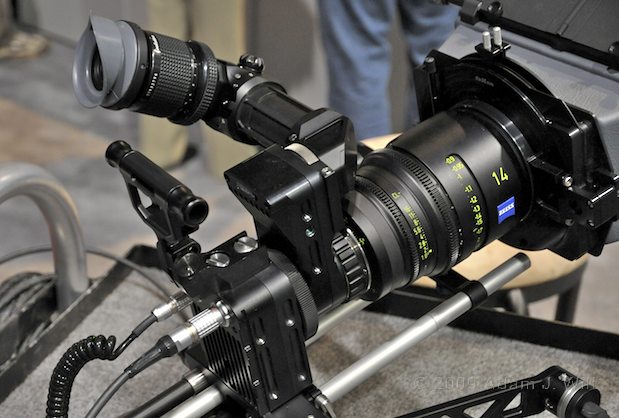 …there’s an optical viewfinder, thus putting the lie to Arri’s and my assertion that the D-21 is the only digital cine camera with an optical finder!

The Optical viewfinder replaces the spacer block that would normally be present, so there’s no change in flange-back distance. It uses a beamsplitter mirror (30% reflectance, 70% transmittance) to divert some light to the finder, so it’s flicker-free and always usable with less than a stop of light lost from the sensor.

The Mini is a very lightweight and eminently handholdable rig, though it trails an umbilical to a laptop. On “Slumdog”, reportedly, the brains ran on a MacBook carried in a backpack, surrounded by ice packs to avoid meltdown in the fierce Indian heat. 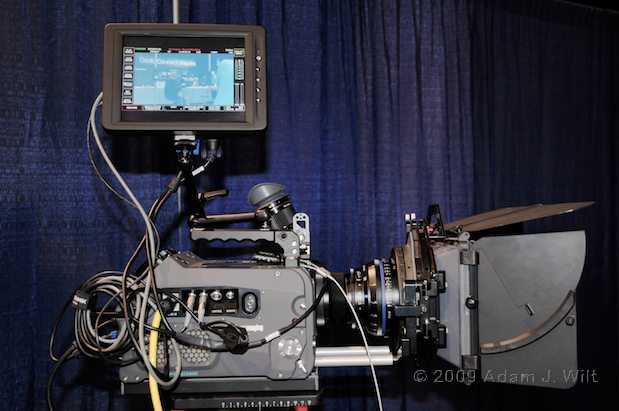 BandPro is also showing the fully-loaded SI-2K, the one with the P+S Technik-designed body with the computer and storage internally carried. This version, while bulkier than the Mini, isn’t any larger than a Red One, and it’s quite at home on an O’Connor 1030 fluid head. Silicon Imaging’s touchscreen finder is mounted atop it, and a P+S Tecknix OLED EVF is on the operator’s side.

And yes, that blue stripe on the lens? It’s one of the new Zeiss Compact Primes—I’ll have more info on these lenses later today. 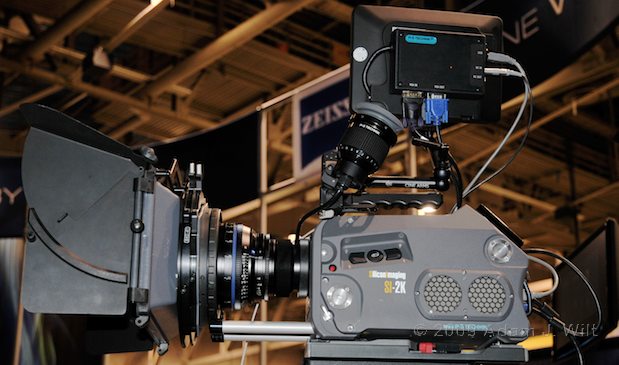 The operator’s side of the SI-2K

Even though this version is more tripod-oriented than the mini, note the rosettes front and rear for quick attachment of handles or other accessories, as well as the integrated rod supports. 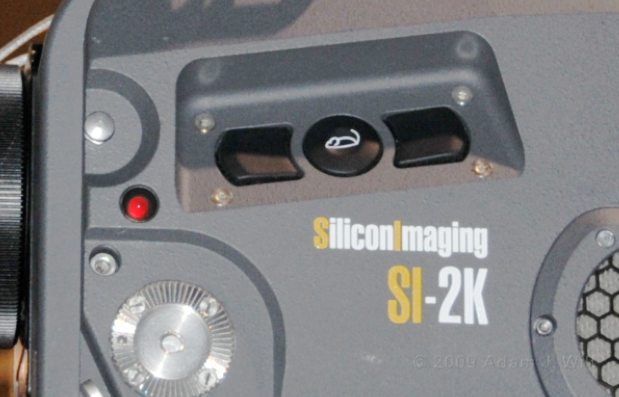 Close up on the SI-2K’s mouse buttons.

When the touchscreen is unavailable, you can still drive the menu system using these mouse buttons on the side of the SI-2K.