A sampling of tech demos and real products. 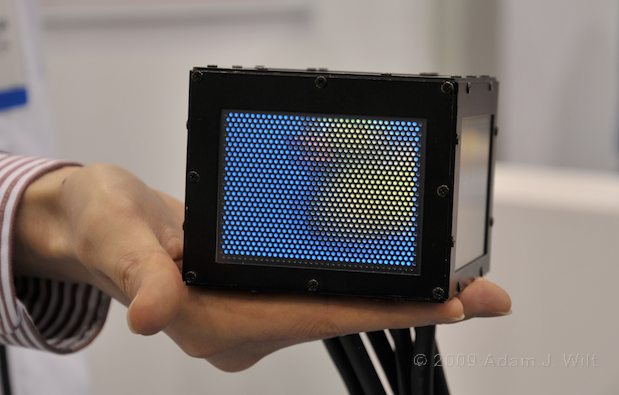 I spent Monday at NAB in the South Hall, with a brief excursion into North Hall. Here’s a little of what I saw and heard…

gCubik: Sharing and Grasping 3D Images used a handheld cube with 3D LCDs in each face to demonstrate in-the-round (or in-the-cube) 3D images. 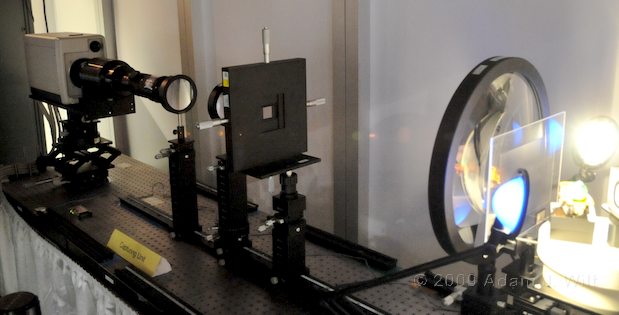 A 4k video camera on an optical bench shot a small setup using white light (through a series of lenses and a lenticular sheet) and the resulting image, processed by a bank of PCs, created a holographic image. 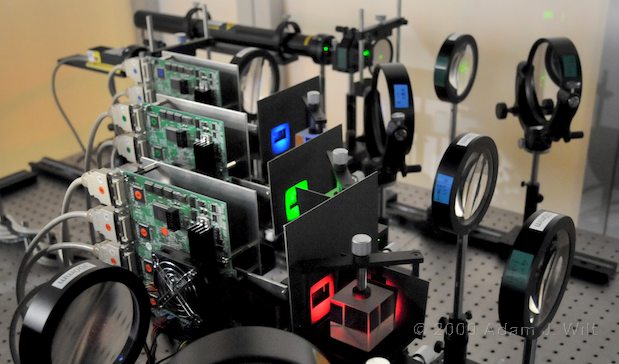 The image was reproduced using a set of RGB lasers with prisms and combiners.

The resulting postage-stamp-sized image may not have been the most dramatic thing imaginable (and I wasn’t able to get a properly usable photo of it), but like a dancing bear, the wonder was that it worked at all! 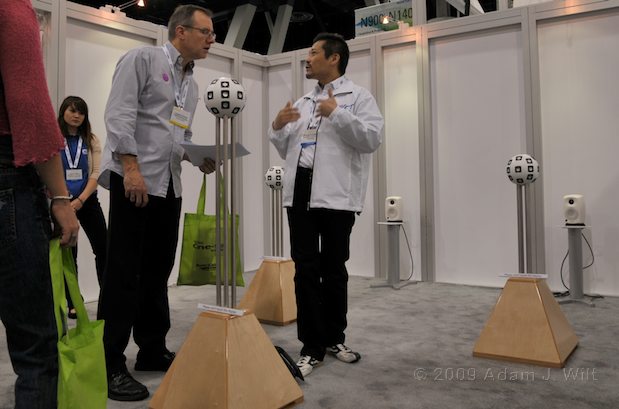 Three speaker globes, each with 26 individual speaker elements, and two traditional speakers were used to create an immersive soundscape. They were fed tracks recorded from an equally immersive array of microphones surrounding musicians. Walking through the space sounded just like walking through a small ensemble.

These were tech demos, and may or may not make it into shipping products in the future. When I went to the South Hall, the stuff was at least supposed to be offered for sale… 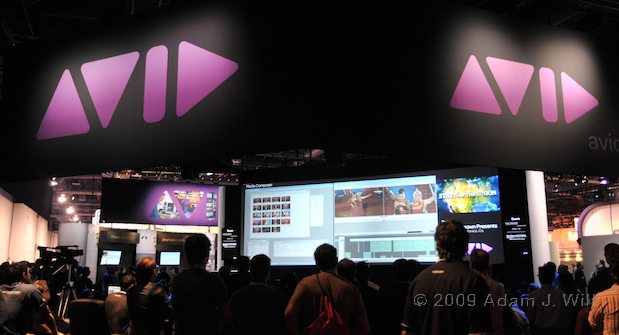 The Avid booth in the front of the South Hall upper level takes the sapce that Sony used to occupy.

Avid returns to NAB with “New Thinking”, a large and impressive booth, and a nicely reworked logo.

Next: two cool products for the rest of us, and some Adobe demos… 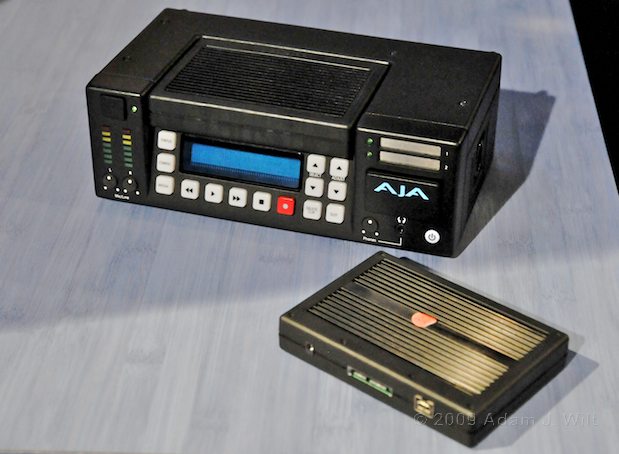 The AJA Ki Pro and a spare disk pack.

AJA dropped a minor bombshell with the Ki Pro. Start with the AJA IO HD, a FireWire800-connected, anything-in, anything-out, digital/analog connector box with built in downconverter and Apple ProRes 422 in hardware. Now shrink it down by a factor of four, and add on-board storage for recording and playing back clips. The Ki Pro ships with a 250 GB removable disk pack; additional 250 GB packs will be US$250. 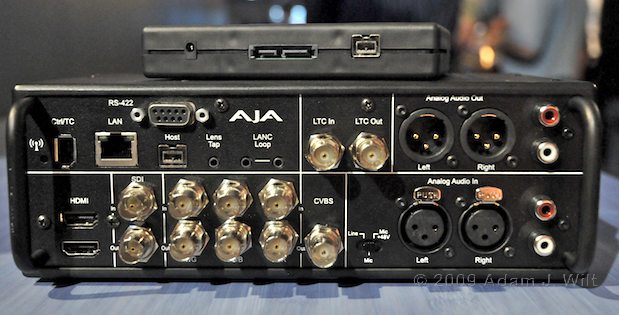 Like the IO HD, the Ki Pro has HD-SDI, component, composite, Y/C, and HDMI I/O, as well as an RS-422 machine-control port. 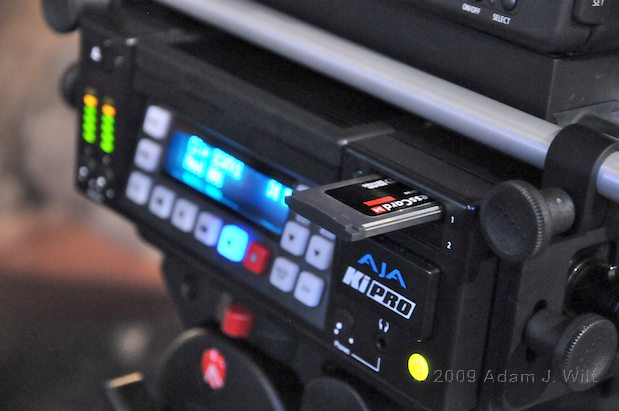 The box will also record on ExpressCard34 memory, though only using ProRes422, not ProRes422 HQ.

You can plop the thing into a backpack, Slumdog-Millionaire-style, and control it wirelessly. 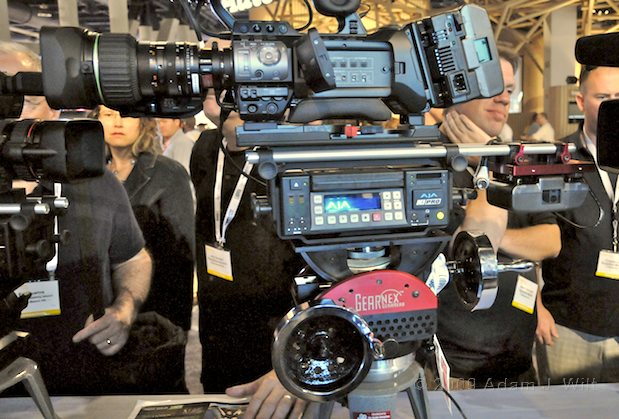 GearNex (also seen here at the AJA booth) has developed a low-cost, lightweight gear head, suitable for prosumer camcorders and even lightly-loaded Reds. 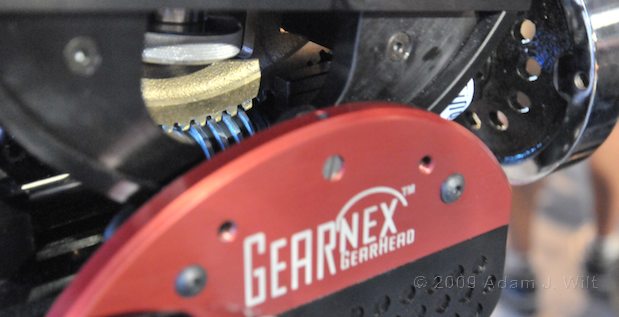 It’s an honest-to-goodness gear head, perhaps not quite as smooth as some of the higher-end heads, but not bad at all. Both pan and tilt use nicely-weighted wheels with free-spinning handles, and both axes offer low-speed and high-speed gearing. It’ll pan 360 degrees, tilt down 45 degrees, and tilt up 45 degrees or until the back of your camera runs into the wheel, whichever comes first (the head is supposed to ship with a tilt wheel extender shaft, but I didn’t see it on the AJA booth). NAB show pricing is around $4000, and I think the post show pricing will be around $6000. As I recall, Silverado Systems has show pricing for pre-orders.

After hours, Adobe’s Simon Hayhurst showed a tech demo of a script-integration tool Adobe is working on. A script in standard format (created with Final Draft or the like) is parsed into XML, using the highly structured formatting of a film script to recover metadata: locations, actors, lines, and the like. Once read into a project database, the script data can be sent to Adobe OnLocation to create a pre-populated shot list, searchable and sortable on all the metadata derived from the script. Shipping? Some time in the future… maybe…

Premiere Pro 4.1, coming up soon, has access to all the metadata of an R3D file, letting you change color and gamma spaces, use or ignore embedded curves, change ISO ratings, color balances, and RGB gains and offsets. 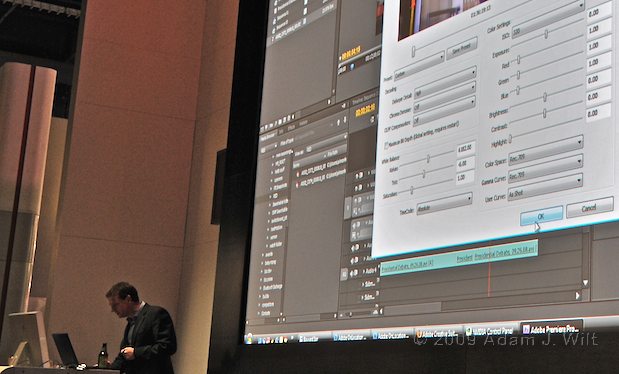 Adobe strongly suggests running CS4 with 16 Gigabytes of RAM to exploit the advantages of 64-bit code. “8 Gigs costs only $300, and if you’re trying to cut HD on a system with less than 16 gigs, you’re doing yourself a disservice.” Adobe also talked about Avid / Premiere Pro interchange, with basic AAF support already in the product and better support (including OMF) in upcoming updates.

There’s a lot more, but it’s past midnight and I’m running on 5 hours of sleep already and it’s only Monday (erm, was Monday; now Tuesday!). I’ll defer the rest of today’s goodies for a post-show wrap-up. Tomorrow is the Central Hall, with all the usual suspects: Panasonic, JVC, Canon, Sony, Arri, etc. Stay tuned…