Saturday saw a panel session on “The Future in High Dynamic Range – Are You Ready?” as part of the “Future of Cinema” conference track at NAB 2018. Herewith, my hastily scribbled notes and off-screen photos.

The HDR content bottleneck is the cost of the mastering monitor: typically $25,000 and up (there are plenty of HDR-capable cameras and consumer TVs).

The separate (larger) client monitor has historically been plasma, because its phosphors matched CRT displays, had wide viewing angle, etc. But you can’t get ‘em any more. Why not LCD? Bad black levels, blooming due to local dimming, poor viewing angles, etc. Things got better in 2014–2015 with LG’s OLEDs, starting in 2016 with proper calibration, these can match RGB mastering monitors (at least for SDR).

Built in controls are too coarse; so we typically use LUT boxes. New LGs allow low-level access by SpectraCAL, so no need for an external box.  Perceptual matching (matching by eye, not by the numbers): “how is this calibration???” If it looks the same, that’s what counts. Calibrate mastering monitor, manually match the client monitor, using several “golden eye” viewers as judges.

Most TVs roll off highlights. Hard clip? You’ll get almost everything except the highlights. Or, maintain code values, clip at 1000 nits? Everything is a bit dimmer, but on a large display it looks very close (because bigger displays look brighter). Since more HDR reference monitors are going to LCDs, what about using same-nit-level LCDs? They work OK if you’re on-axis, so just make sure the client knows to sit in the sweet spot.

HDR in the cinema: We more properly talk about EDR: enhanced dynamic range (about 2x the DR of SDR) instead of HDR. Examples: Dolby Cinema, eclair color, IMAX with laser. Direct LED cinema screens are the future if we want to move to true HDR.

HDR reference monitors are 25K and up; OLED TVs 1/10 the price. You need to see the pics on a large monitor because that’s where all the flaws show up.

Our process: Life is more beautiful at 4000 nits, but less predictable. Expose for EDR/HDR as a creative possibility. Remember that HDR is not the same as EDR. Define tech requirements for the EXRs so we don’t bake in LUTs or other destructive changes. You want to avoid having the DP look at the colorist and say “that’s not my movie” (as happened on Coco, the initial HDR grade was way too saturated and it had to be backed off). We’ve been working (editorial, not grading) in Rec.709, with HDR LUTs for preview, and some LG OLEDs in production for review.

Understand and communicate the limitations of the technology and set appropriate expectations. The OLEDs have really helped, but many consumers in the market aren’t buying those high-end TVs. You want to start from known grading quantities: start with an EDR theatrical grade, remove the 108 nit (SDR) clamp. P3 is the starting color space, but we can exercise 2020 as needed. Master at full range, trim to consumer range(s). We’re grading at 4000 nits on the Dolby Pulsar. Then we trim to 1000 nits and 600 nits on PRM and x300 monitors. Approve an unconstrained grade on Christie Laser projectors, normally used for 3D but repurposed for 2D with more brightness (1000 nits on the big screen, “which is insane!”). Review encodes on LG C7 OLEDs (we will get the C8s when we can – “does Walmart have ‘em yet?”).

Master for the future: typically within 4000 nit, but displays will always have limits, so use display mapping for different release channels. The master should always have everything you want. HDR10 to disk for now, Dolby Vision (DV) for digital distribution where possible. We love DV but it’s too risky right now to send out on disk; on digital distro we can always re-tweak; so on disk it’s HDR10 for now. DV for the next disk release?

Can we control judder? Can we find the point between too smooth vs. too juddery? What else affects judder? Higher brightness makes it more apparent, as does higher contrast. What looks good in SDR judders too much in HDR, so people wind up grading HDR darker to avoid this, which defeats the whole purpose.

Our current work is on exploring how much judder is desirable. We used a 120+ Hz OLED display for experiments with a moving-edge pattern at varying frame rates, motion speeds, contrasts, and brightnesses. Most significant factors turn out to be speed of the moving object, frame rate, and brightness. The higher the frame rate, the less judder sensitivity.

We retested with full-frame image pans, and every parameter we varied was significant. But again, at 120fps, other parameters were relatively insignificant. We tested differences in shutter angle: shutter angle wasn’t very significant compared to other factors.

We developed a model for judder: 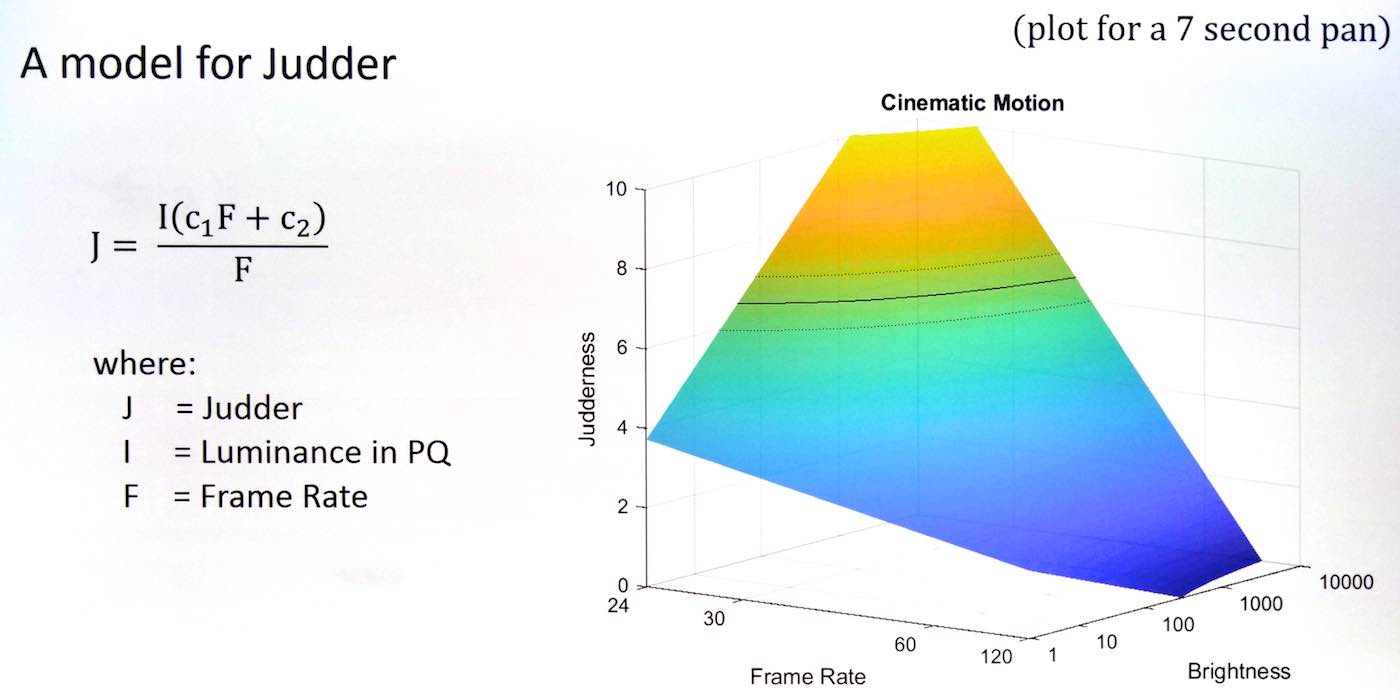 Taking that black line though the plot, which is a locus of cinematic motion (using the canonical 7-second panning rate as the metric)…

…we can see that as brightness increases, you’ll have to boost frame rate to keep the same amount of “cinematic” judder perception.

Question: What about synthetic sinusoidal shutters, e.g. Tessive Time Shaper / RealD True Motion, using varying mixes of frames shot at 120fps? Answer: it looks different on different brightness displays, so you’ll have to vary it based on brightness. That changes the look of the images, so it’s not a cure-all.

Bill Baggelar, Sony Pictures: The future of HDR in Cinema

Do we need EDR or HDR in cinema? EDR is the current state of cinema tech. EDR is a good 1st step. The consumer electronics industry is pushing HDR; consumers prefer HDR.

Problems to solve with judder (see previous talk) and motion interpolation; Screen Channel audio coming through the screen (there are some 35% porous screens for this purpose); image scaling algorithms; tone mapping for different display systems.

Any mistakes in transcription or paraphrasing are mine alone. Photos are shot off the projection screen, and the images remain the property of their owners.

Disclosure: I’m attending NAB on a press pass, but covering all my own costs.