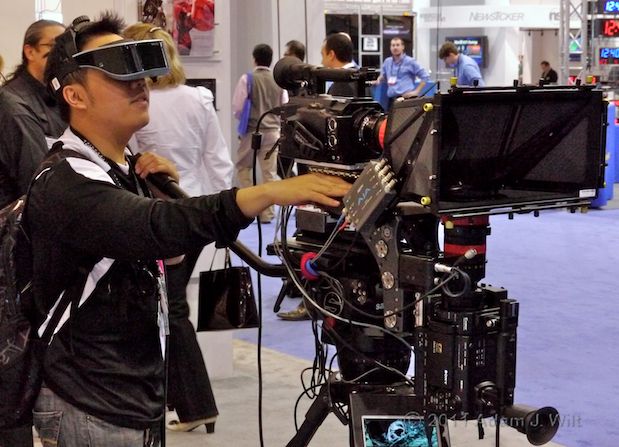 If you’re gonna shoot S3D, why not watch S3D? Dual PMW-F3s on a mirror rig.

I’m a Chauncey Gardner when it comes to 3D: I like to watch. But as long as stereo 3D requires a bulky mirror rig, or a data cart like the one below, watching is all I’m likely to do. Fortunately, NAB shows that I’m not the only one who feels that way: there were plenty of [somewhat more] practical solutions for shooting stereo. 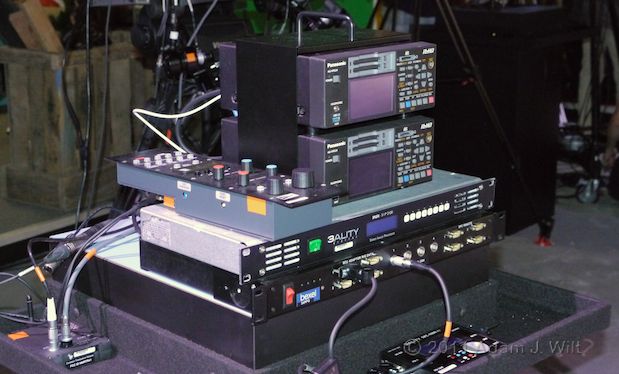 This is another sort of thing that has to go away before 3D moves into mainstream production. 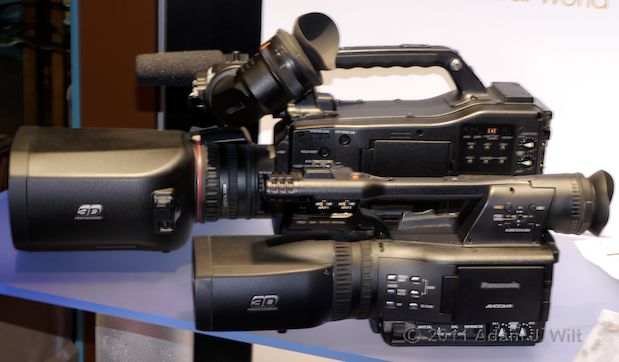 There’s more info on the 3DP1 in this video with Panasonic’s Steve Cooperman. Price of the 3DP1 has not been announced. The 3DP1’s IA (interaxial distance, a.k.a. interocular or IO) wasn’t mentioned, either. 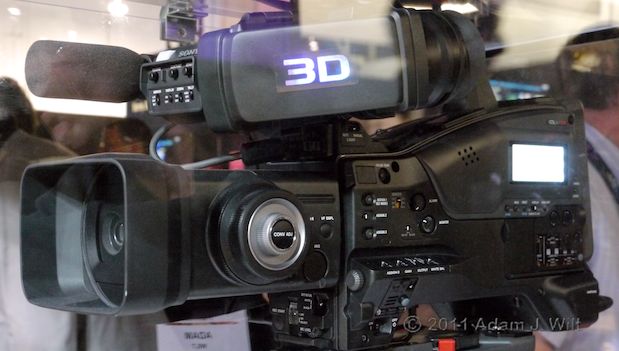 Sony has an interesting lens control design; in addition to a standard right-side zoom rocker, this camera has concentric manual zoom, focus, and convergence dials on the left: 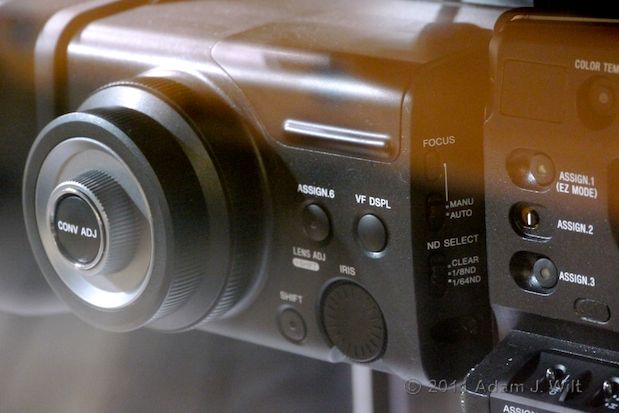 Sony has a video with Mel Medina describing the camera in more detail. 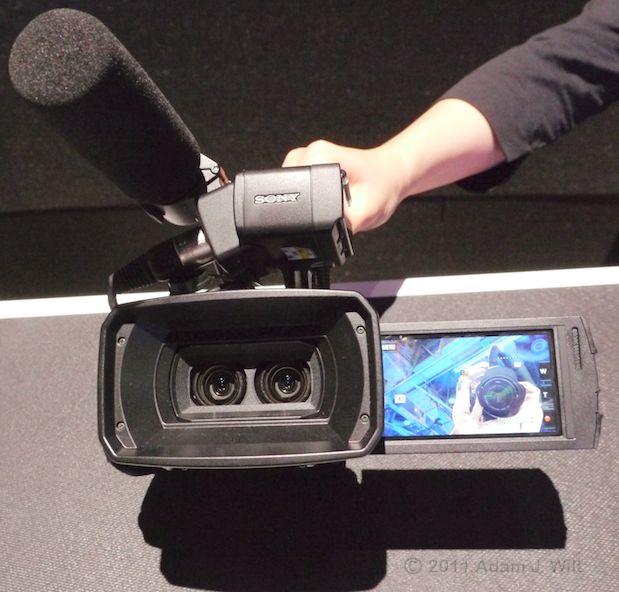 This little thing has a 10x zoom lens, 31mm IA, and adjusts disparity/convergence by shifting the active image window on its wider-than-otherwise-necessary CMOS imagers.

Here’s the cool part: the flip-out LCD has the usual left-eye, right-eye, mix-mode display options, but it’s also a super-high-resolution lenticular screen: sharp and clear glasses-free 3D! Get your head in the right place (physically as well as mentally, grin), and the 3D jumps right off the little display. Mind you, the stereo effect on a 3.5″ screen won’t quite match that of the same image on a 35″ LCD or a 35-foot movie screen, so don’t use the flip-out LCD to judge disparity, unless you have a Dave Gregory-style disparity guide attached to it.

Let me state right now that I have absolutely no use for such a camcorder. And yet, I must have one. It’s that much fun.

More on the HXR-NX3D1 on Sony’s UK site.

JVC isn’t sitting on the sidelines, either: 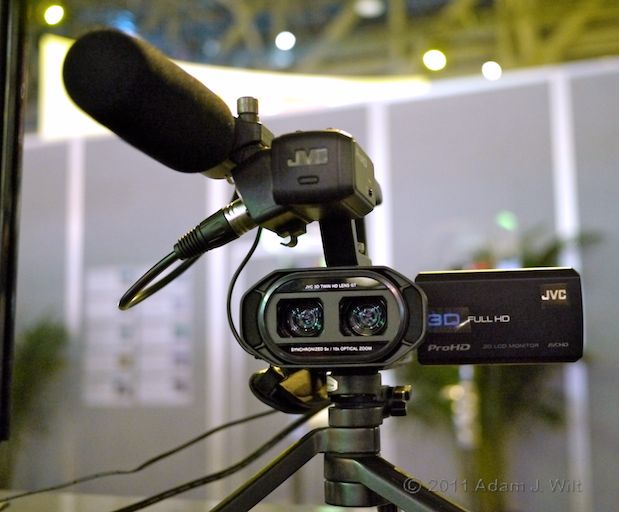 (D’you notice how the biggest thing in the photos of both these camcorders is the microphone?)

The JVC’s IA isn’t specified; its 10x lens only zooms to 5x when in 3D mode; its lenticular display isn’t quite as high-res as the Sony’s—but it’s $1000 cheaper.

(There’s also a brief writeup of these two 3D camcorders on camcorderinfo.com, with links to reviews of the consumer camcorders from which they were derived.)

So the Big Three all have one-piece players in the stereo 3D production arena. This is great, especially for broadcasters, but these cameras come with limitations: fixed lenses, fixed IAs. What about the guys wanting to swap lenses, go wider or narrower on IA, or even change sensors? 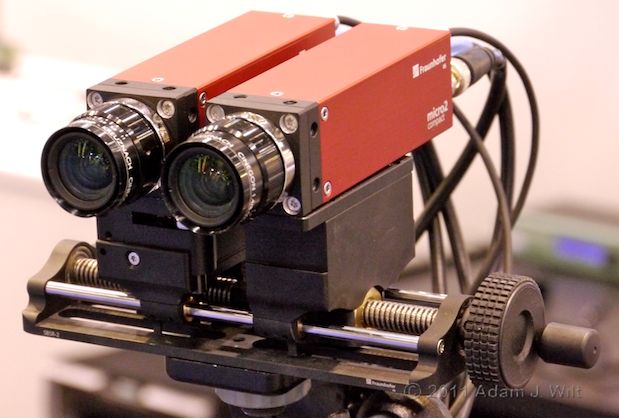 Datavideo introduced their S3D-1, with interchangeable lenses and IA variable from 44mm to 69mm: 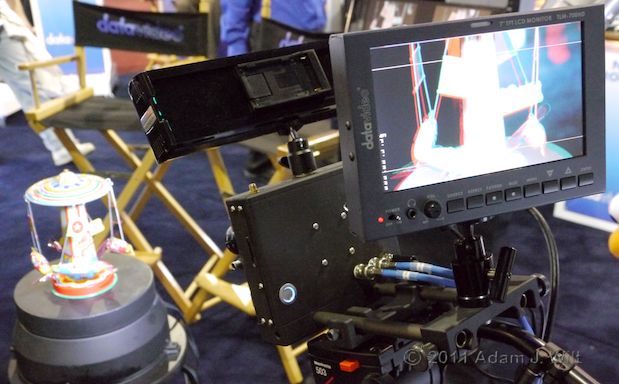 Datavideo’s S3D-1 (the camera bit is the slab with the dual BNCs). 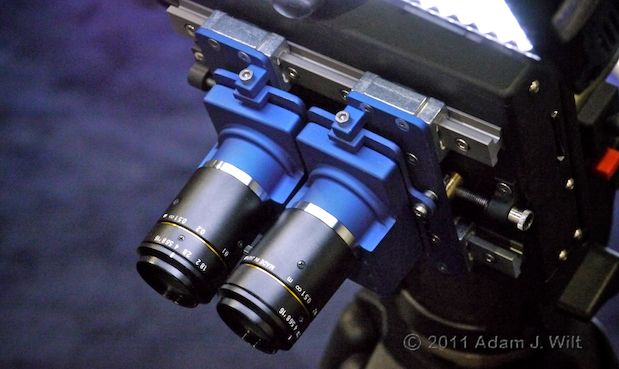 Front top view of the S3D-1; note the convergence. 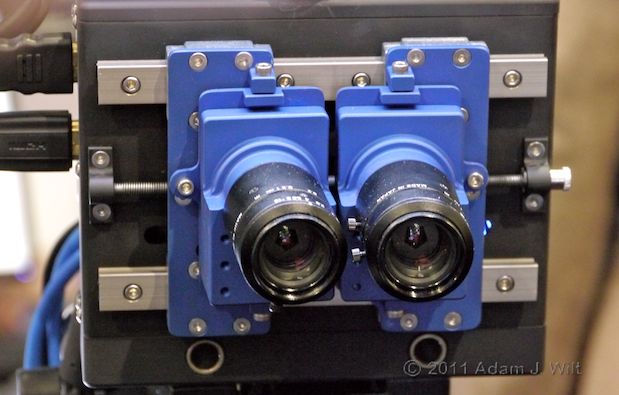 Front view of the S3D-1. The rails and leadscrew allow adjusting interaxial distance.

Take it up a notch, and you get the Meduza “beyond 4k” stereo 3D camera, with interchangeable sensors, interchangeable lenses, and servo-adjustable IA, disparity, and who knows what else? 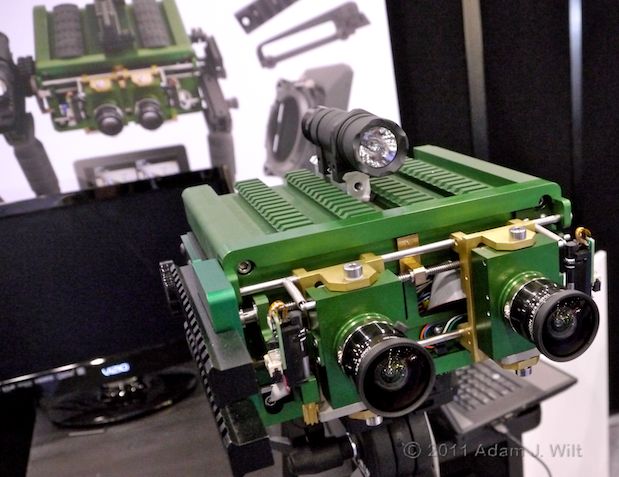 The Tinkertoy / Erector Set / Meccano bodywork is “built around the NATO accessory specification. The camera can be fitted with over 2000 different existing accessories that are compatible with the NATO military specification: Grips, rods, shoulder stocks, straps, top handles, side handles, tripods, bi-pods, lights, rangefinders, etc.” Jim Jannard, you may talk a good game with RED gunstocks and Rockets and “bomb” EVFs and battle-tested stuff, but these guys are actually bolting on NATO military bits! So there! [grin] 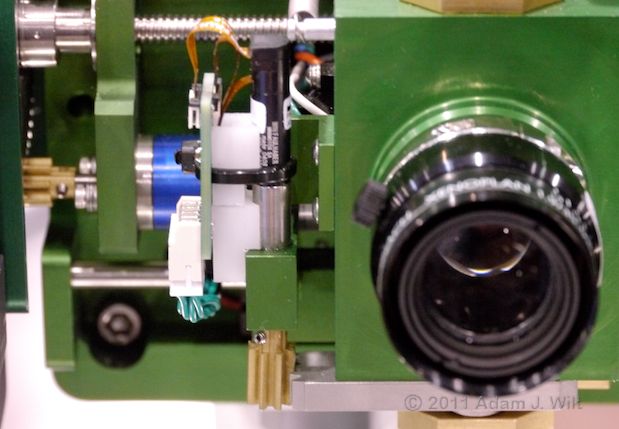 Meduza’s right-side convergence servo, with (I’m guessing) the IA servo behind it.

Production cameras probably won’t have all this delicate hardware exposed to the elements, and as I look at the coarseness of that convergence geartrain I wonder about the reliability of repeatable tenth-of-a-pixel convergence adjustments. The Meduza is clearly a concept model; it’ll be interesting to see how it develops over time.

Neither the Datavideo nor the Meduza solve the problem of lens matching and alignment; separate interchangeable lenses make the level of intimate control that Sony, Panasonic, and JVC have with their one-piece camcorders pretty much impossible. Fortunately, there is a middle ground: interchangeable stereo lens sets bundled in a single housing:

The ZEPAR lens sets for shooting 2K stereo on the Phantom 65.

The Phantom 65-Z3D camera from Abel Cine shoots side-by-side 2K images on the Phantom’s 4K sensor using matched Zepar (“ZEro PARallax”) lenses. The lenses use lateral shift to adjust convergence, just as the lens on the Panasonic 3DA1 does (and presumably as the Sony and Panasonic shouldercams will), so there’s no keystoning correction needed in-camera or in post. This is the setup that Doug Trumbull is excited by. Abel Cine’s 2.9 MB PDF has all the details.

Clearly, 3D isn’t something to be attempted by merely “nailing a couple of HVXs to a 2×4.” Right?

Maybe sometimes; not always. Tuesday night, at the after-hours CML gathering, I encountered Eric Kurland. He had with him his 3D rig: two obsolete Canon camcorders bolted to a crosspiece, with a common-start system comprised of a pushbutton on a repurposed Altoids box connected with retractable USB cables: 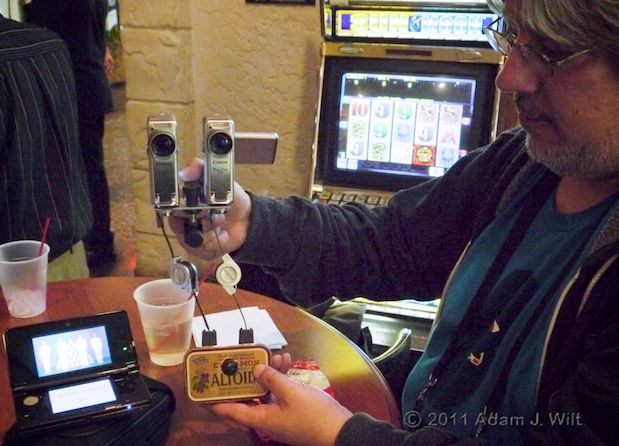 This rig has the signal advantages of affordability, portability, ease of use, remote control (via the extendable cables) and integrated craft services (assuming there’s still room in the box for some curiously strong mints).

But what about convergence? alignment? tilt? lens matching? zoom tracking? keystoning? vertical disparity? sync? etc.? A lash-up job like this can’t possibly work for real production, can it?

Mr. Kurland had with him a Nintendo 3DS handheld stereo 3D gaming system, showing the stereo 3D OK Go video “White Knuckles” which Nintendo is distributing to all (non-Japanese-market) 3DSes in a firmware update.

Mr. Kurland shot that video with his curiously workable rig.

If you don’t have a 3Ds, you can watch the 2D version of the video while pondering the simple fact that some crazy fellow somewhere is breaking all the rules about how you’re supposed to shoot stereo 3D… and he’s getting away with it.

We had a chance to visit with Rod Clark of Teradek who talked about the evolution of their products....
Bernie Keach gave us the low down on Marshall’s new monitor lineup with some pretty exciting features. Their new...
On Monday at NAB, the amazing people at Adobe arranged for me to meet with the project manager for...
We utilized a few different pieces of equipment while interviewing on the NAB floor this year, but the one...