On Monday at NAB, the amazing people at Adobe arranged for me to meet with the project manager for Premiere CS5.5, Al Mooney, who very graciously took some time to enlighten me on what people can expect from this upgrade. I was a bit skeptical going into the interview, as many times software upgrades that involve decimal points are repackaged versions of the previous one, but I have to say I was totally taken back by just how many new and improved features Adobe is offering in Premiere CS5.5.

According to Al, Adobe has been taking advantage of their very healthy community of users and bringing some of the top editors who use different platforms such as FCP or Avid to watch and see what these guys found challenging.

They then made those challenges more accessible and incorporated those into Premiere Pro CS5.5. So what we can expect is a format that is easier to access and negotiate, no matter what software you’ve used in the past.

Essentially Adobe is taking the heart and soul of CS5, Mercury, and elevating it to new heights making Premiere Pro much more agile and simplified than its predecessor starting with the increase in the amount GPUs it supports. Initially there were just a handful of cards that could take advantage of the Mercury technology. With 5.5, we’re seeing twenty GPUs, and the list is growing. However, as Al explains even if you’re cutting on a computer that doesn’t have a compatible GPU, you can still take advantage of the speed and agility of Mercury by making some adjustments to your playback resolution.

We had a chance to visit with Rod Clark of Teradek who talked about the evolution of their products....
Bernie Keach gave us the low down on Marshall’s new monitor lineup with some pretty exciting features. Their new...
We utilized a few different pieces of equipment while interviewing on the NAB floor this year, but the one... 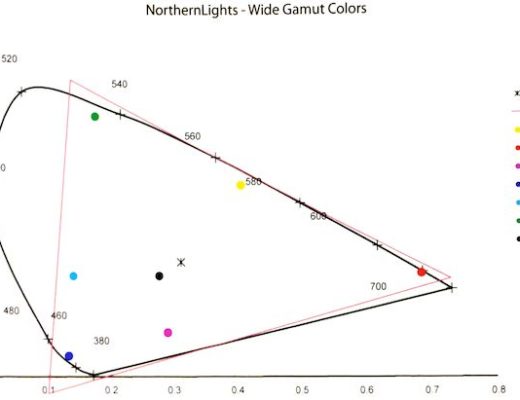 Chromaticity plot of NorthernLights LEDs. Triangle is Sony F23’s gamut. The chart at the top of the page shows...