Stuff I saw that didn’t fit in any of my other NAB articles. 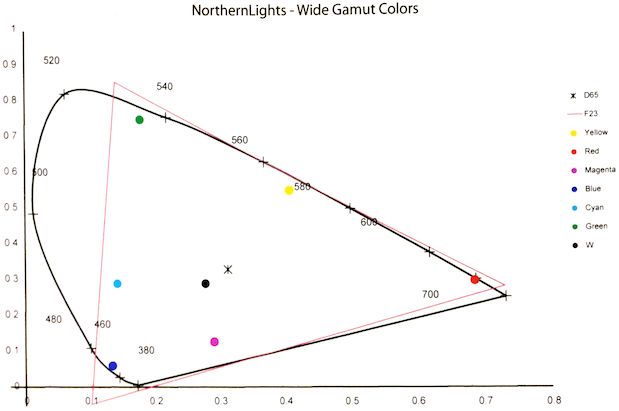 The chart at the top of the page shows the chromaticity coordinates of the wide-gamut LEDs used in the DSC Labs NorthernLights chart at the end of this video clip. The LEDs get around the problem of making highly-saturated reflective patches and allow you to test the limits of a camera’s saturated-color handling ability. 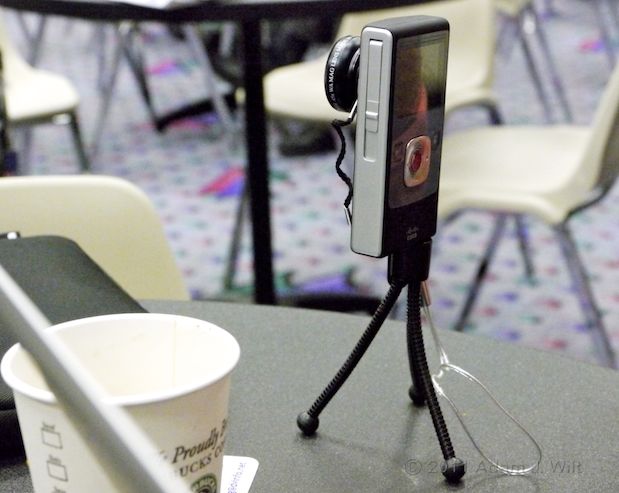 Master raconteur Stefan Sargent showed up in the press room carrying his documentation gear for NAB: a Flip camera. That very morning, the news had broken that Cisco was closing Flip down. Given the ongoing popularity of the Flip, the theory that its market was being displaced by cameras in smartphones doesn’t hold up; you can buy a Flip for around $150 free and clear whereas a smartphone will cost you that much every two months in contract costs alone.

Is Flip simply a handy scapegoat that the panicked management could throw off the rooftop in a knee-jerk action (instead of selling or spinning off) as part of their newfound focus-on-the-core-business strategy? You might very well think that; I couldn’t possibly comment.

Blackmagic Design had a lot more to show than just some insanely affordable uncompressed SSD recorders.

They’ve beefed up their Mini Converter line with ruggedized versions for rough ‘n’ tumble field use; the tough guys cost about $100 more than their more delicate cousins, which remain in the lineup.

DaVinci Resolve 8 is the latest version of the astonishingly inexpensive grading application; version 8 adds multi-layer timeline support (hooray!) and expanded capabilities through the use of OS X’s OpenCL (Open Computing Language) to better leverage CPU and GPU resources without being tied to specific GPUs.

If that’s not enough, there will be a Lite version for free—how on earth do you beat free? If Resolve were a dangerous controlled substance, how long do you think BMD would be allowed to stand on the streetcorner, hawking its wares? “Hey, kid, wanna color grading application? The first one is free…” Before you can help yourself, you find you’re in a darkened room in some facility, surrounded by other addicts, having spent $995 for Resolve 8, and wondering what you’re going to have to sell to come up with the $29,995 for the Resolve Control Surface you find you can no longer live without…

BMD was also one of the companies showing a prototype Thunderbolt product.

Here, Thunderbolt daisy-chains a BMD UltraStudio 3D I/O box to a Promise Technologies Pegasus RAID and thence to a MacBook Pro. It’s all very early-days stuff still; the MacBook Pros are shipping (and iMacs with Thunderbolt may be imminent), but most of the Thunderbolt devices at the show were tech demos or “shipping later this year”. However, I saw Intel reps at several booths, talking to product managers and engineers about Thunderbolt development kits, so I expect Thunderbolt-equipped gear to start coming on the market in a great flood once the development cycle gets another turn of the crank.

Wohler’s Presto 1RU 16×1 switch has a display in each source button.

Small display panels are getting so cheap and so available that it was rare to find a new video product at the show that didn’t have a built-in monitor. The ultimate expression of this trend is the Wohler Presto 16×1 SDI switch, which has an OLED display in each source button. 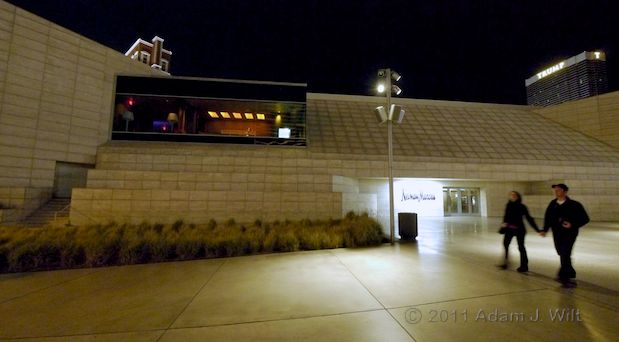 On the strip, a rare island of architectural restraint, with the kitsch of Vegas looming beyond.

Vegas is an odd place, filled with flashing lights, animated billboards, loud noises, and an exuberant disregard for the sorts of aesthetics that guide normal development; the casino atmosphere pervades everything with a sense of unreality.

Once you get off the show floor and into the city, it’s much the same there, too.

This Neiman-Marcus storefront caught my eye as I was walking down the strip to have a late dinner with Mike Curtis Wednesday night. The pop-out room is oddly reminiscent of the status display on an Echolab MVS-5 or DV-5. I positioned myself at the edge of the sidewalk and discreetly framed up the shot, waiting for a pedestrian to walk through for a motion-blurred human touch… only to find folks politely waiting just out of view for me to snap my photo before they strolled past. 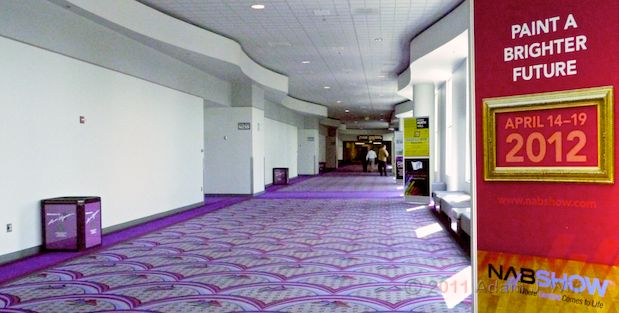 That’s all, folks, until next year!

Stills and clips shot with a Panasonic DMC-GH2 MFT camera, using three Panasonic lenses: 14-140mm f/4-5.8, 7-14mm f/4, and 20mm f1.7. Novoflex Pistock-C shoulder brace and Sennheiser MKE 400 on-camera shotgun mike. Editing done on a MacBook Air (the last of the good ones, with an SSD, a backlit keyboard, and a proper, separate power button), using iMovie to ingest clips at 960×540 to save space and FCP 7 to edit and output the final 900×506 videos.

The GH2 isn’t the best still camera in the world, or the best video camera, but it’s the best combo still/video camera I’ve found: less aliasing than anything else in the “versacam” world, no chroma moir©, clean-enough images up through EI3200, live histogram and overexposure warnings while recording, live EVF as well as a flip-out LCD, audio level meters visible in the finder while shooting, small and lightweight. The camera helpfully says, “please make sure to turn on the power of the external microphone” when it detects one plugged in, a truly helpful reminder! The GH2 and three lenses combined weigh as much as the 5D Mk II with 24-105mm lens I used last year, and the GH2 is much more user-friendly for video work. And the 7-14mm is to die for.

Drawbacks? It’s a bit clippy in the highlights, movie-mode autofocus (one-shot vs. continuous) is inexplicably set in the menus instead of using the AF-S / AF-C mode selector lever, and it has the same blasted nonstandard USB connector as the GH1 uses. Like other versacams, it’s “steppy” in aperture changes (even in auto-aperture modes; you can see it in some of my videos) despite the 14-140mm’s supposedly video-friendly iris.

When shooting in manually-assisted autofocus mode, you have to manually tweak the focus before the camera decides it’s done, otherwise you wind up spinning the servo-drive focus ring with no %$#@!ing effect on the picture. Oh, well, maybe by NAB next year the fully-manual Voightlander 25mm f/0.95 will be affordably available… (grin)

The camera, lenses, computer, and software I used were all bought and paid for by myself.

We had a chance to visit with Rod Clark of Teradek who talked about the evolution of their products....
Bernie Keach gave us the low down on Marshall’s new monitor lineup with some pretty exciting features. Their new...
On Monday at NAB, the amazing people at Adobe arranged for me to meet with the project manager for...
We utilized a few different pieces of equipment while interviewing on the NAB floor this year, but the one...