Following a previous article about my photographs appearing as Royalty-Free on a Google index, I was contacted by 500px Customer Excellence team, stating it was all a “mix up”. It makes sense to return to the subject and try to clarify a few things. 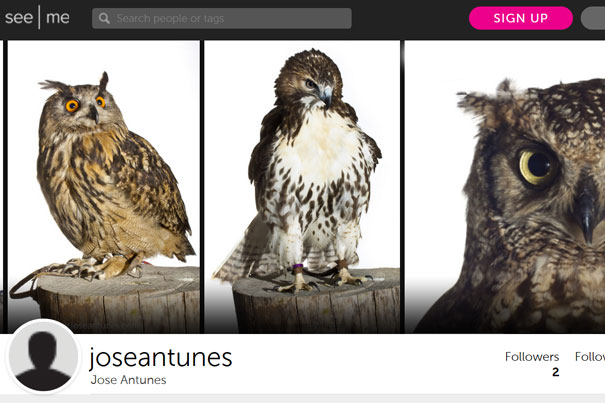 To fully understand the story it is a good idea to read the original article, My Photos Are Not Royalty-Free, which I can summarize here in a few words: “When I recently browsed the web to show some images to a friend, I found a Google entry under “royalty-free stock photos from Jose Antunes | 500px Prime”. I never gave 500px permission to market my photos for me as RF, so I had to investigate…”.

After writing the original article I also had the time and curiosity to explore the story further, so I checked and found that I created the 500px collection in November 2011, specifically to show a series of 12 images of birds of prey photographed by me that year. In the following months I also created similar collections throughout various websites, Flickr, See Me (previously Artists Wanted), Safarious and others, as I wanted to share the collection with as many people as possible. In 2012 I won an international photojournalism prize with the series, but these images are not on sale anywhere, at the moment, and have never been. Not Rights-Managed, the unique licensing system I would adopt, much less Royalty-Free. This may change in the future, but that’s the situation now.

At the time I uploaded the photos to 500px, I created a note to go with the gallery, stating that “I’ve a collection of photos of birds of prey photographed against white backgrounds. If interested into buying some, do get in touch.” I did it and forgot about it completely. So, I was surprised to find a note in Google that I had my Birds of Prey Portrait Sessions on sale as Royalty-Free photos. Even more surprised to know that they could be bought for $250 from which I would receive 70%. But this is all explained in my previous article, so please do read it now. 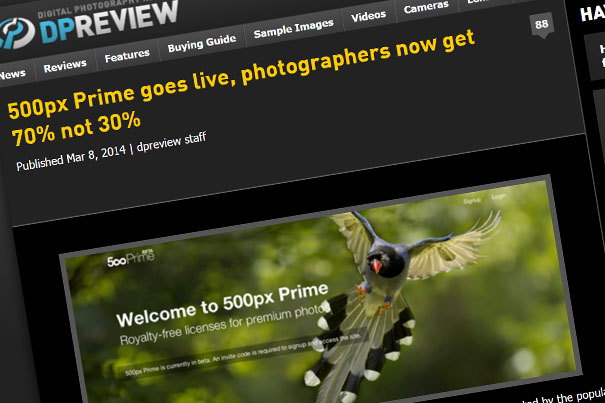 Fast forward. Somewhere in March 2014 500px decided to create their own stock image agency, 500px Prime. I never signed for it, as some others have, hopefully perfectly aware of what they’re doing, so I was puzzled as how my images got there. Well, after the original article was published I got one email from Alex Flint, from the 500px Customer Excellence team, stating that “I saw your blog post and just wanted to follow up, to help you get this fixed as quickly as possible. We have nothing but respect for photographer’s rights, and choice when it comes to licensing their work. We are founded and built by photographers, and every decision we make is driven by that. It looks to me that this whole situation is just a mixup, and a quick fix.”

According to Flint, “By default when a member signs up, their Store is disabled. It seems that back in 2011 or 2012, when you were trying out 500px, you enabled the Store option in your settings. Having this option enabled when we launched 500px Prime last year caused your photos to be listed in the Prime marketplace. They’re not yet available for licensing, unless you actually submit them, or individually approve each sales request, they’re just listed in the search results. And of course, everything that’s listed on 500px Prime, is also indexed by Google, which is how that search result came to be.”

Well, it may well be so, but if it is, maybe 500px, when they created the 500px Prime, should have contacted all the users with the Store option activated, and ask them if they wanted to enter the scheme. What the system is doing, as it is, is the same it did to me. Something I may have tried in 2011 – and I do not use 500px, so I had no reason to go back there and access the back office – became active in 2014 and connected to a new product I was never told about: the 500px Prime. It’s still a big mistake, and I replied to Alex Flint that 500px should publicly clarify the situation and explain users what to do to remove their images from 500px Prime. 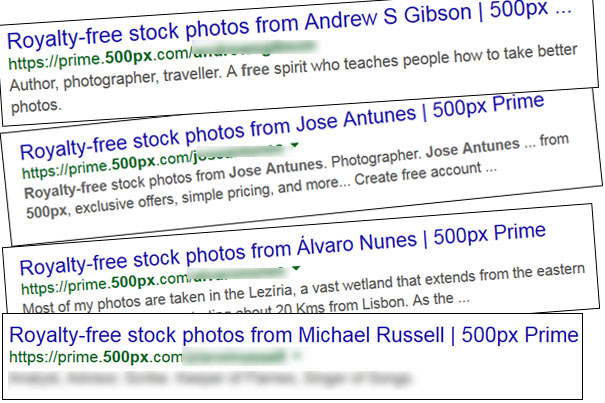 While researching for this second article, I found that other photographers appear on a Google search as having Royalty-Free images on sale at 500px Prime, and decided to contact them to know if they ever had signed in. No, was the answer. So, it seems the system does automatically atribute to photographers present at 500px an index that will appear in Google — the Royalty-Free information already mentionned — , although it does not correspond to reality, as only some have accepted the agreement to enter 500px Prime.

On the other hand, authors like William Neill appear at 500px and 500px Prime, although this photographer, whose work I admire, is selling his images at a low resolution, 900×600 pixels for $250 and even $750, depending on use. This may be a path to explore, if you want to give it a try, but be aware that William Neill never sold a single photo through 500px, as the information adjacent to each photograph suggests. In a pop-up note on the site one can read: “This photo has never been licensed from 500px Prime. Check out now to place a deposit and we’ll go out of our way to secure it for licensing. If we are unable, we’ll refund your deposit after 5 days. For more information see the FAQ.” 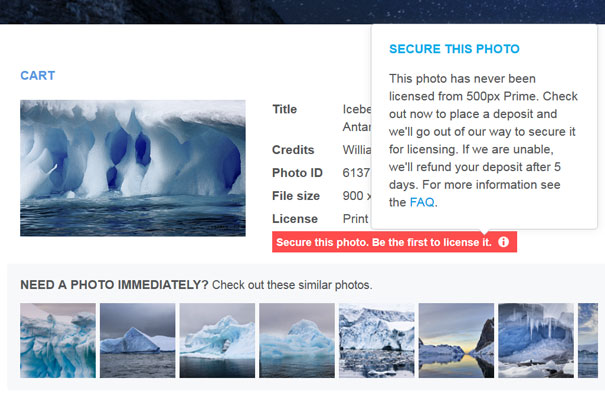 There is also another popular photographer with work available at 500px Prime that on a comment online stated that he never sells through 500px, and simply rejects any enquiry coming from there, using the space mainly to catch potential clients. Another one of my contacts, a popular photographer publishing regularly at magazines like Outdoor Photographer, also has work at 500px Prime, and signed the agreement, but never sold images and is in fact considering taking them all down, and just use the 500px website.

To remove images from 500px Prime, all users need to do is disable their Store in their 500px settings. Alex Flint even offered to do it for me, and reafirmed, again, that 500px “would never sell a photo without approval from the photographer, and as part of our mission to respect and reward photographers for their work we always pay 70% of the profit from each sale” and continued saying that “this isn’t a sales pitch to convince you to join Prime, I know that RF licenses aren’t for everyone, and that’s fine. I just want to emphasize that this was all a big mistake, and is deeply opposed to our core values. I hope now with that background information, it helps clarify what happened, and how to solve it.”

So, that is the whole story. Or almost. Right after publishing the article I had a photographer commenting on it on my FB page, stating the he had just uploaded one image of his to 500px, and found it immediately available for $250 at 500px Prime. So the system is automatic, and unless users are aware that they need to disable the Store, their images will be announced as available for sale.

There is more, though. Photographer Michael Russell commented on my original article with this note:

“I wrote a blog post a while back outlining a bunch of reasons I no longer use their site. I was unaware of this particular issue, and when talking about it on Twitter today they replied and claimed “This was a mixup, and easily fixed”. The pages still exist. In fact, it looks like every 500px account has a corresponding page that shows they sell RF images in search results. The resulting page doesn’t actually show any images, but this is somewhat beside the point. I don’t know if this still occurs, but there used to be a purchase/ad under some images on 500px advertising that it is for sale for their $250 RM license or the $50 web license. I potentially lost a sale when a customer saw this and I wouldn’t match this price. The problem you outline above is yet another good reason to avoid the site IMO.”

I searched for Michael Russell on the web and found one article written in February this year that tells of a situation similar to mine, but has many other things I was not aware of. It may interest readers and help you to understand the whole problem, so, have a look at 8 Reasons I No Longer Use 500px. The story and multiple comments will enlighten you about how photo-sharing sites work. 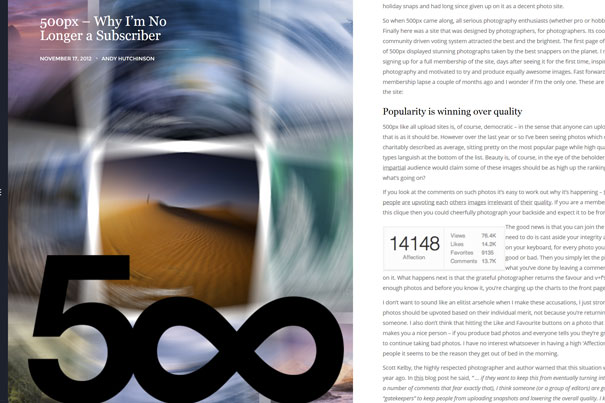 You know, when you start to search for something and new interesting links appear one after the other? Does it happen to you too? Well, Google gave me another article, this one from Andy Hutchsinson, titled, 500px – Why I’m No Longer a Subscriber, published in 2012. It should be said that Andy Hutchinson is back on 500px and 500px Prime since September 2014. I got in touch with him about his returning and he replied this: “You’re the first person that noticed! No, definitely not back. I’m writing a follow-up to the original article, seeing if it’s possible for photos to do well without any self-promotion whatsoever. So I’ve been uploading the best of my shots at various times of the night and day and seeing how they do if I make no interaction with the site beyond my own images.”

Still, Andy Hutchinson’s initial article is up and is a good read about a photographer’s experience at 500px. It’s a long article with long comments from multiple readers, but it really takes you behind the scenes and glitter to tell you things that I mostly was unaware of, as I do not follow photo-sharing sites. From what I read, I am glad I do not, I must add.

With most productions halted due to the pandemic, the usage of stock footage and music in projects has expanded,...