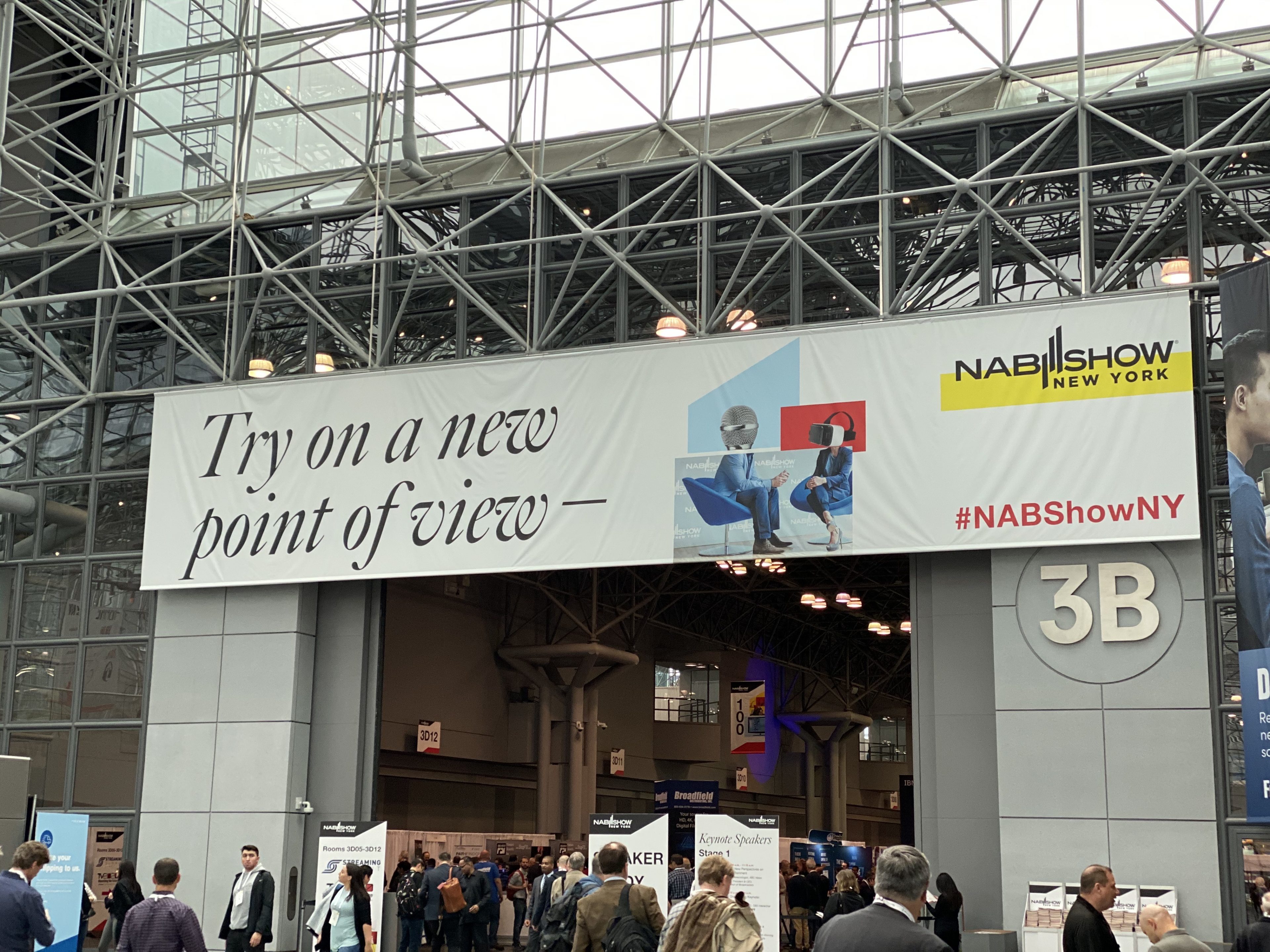 Last week was my first ever trip to New York City for NAB Show New York. I wasn’t sure what to expect and the claims of “it’s just a small NAB” weren’t exactly right as it was very different. There were a lot of the same vendors we see at the big NAB in Las Vegas but just extremely scaled-down.

Take the Adobe booth for instance. 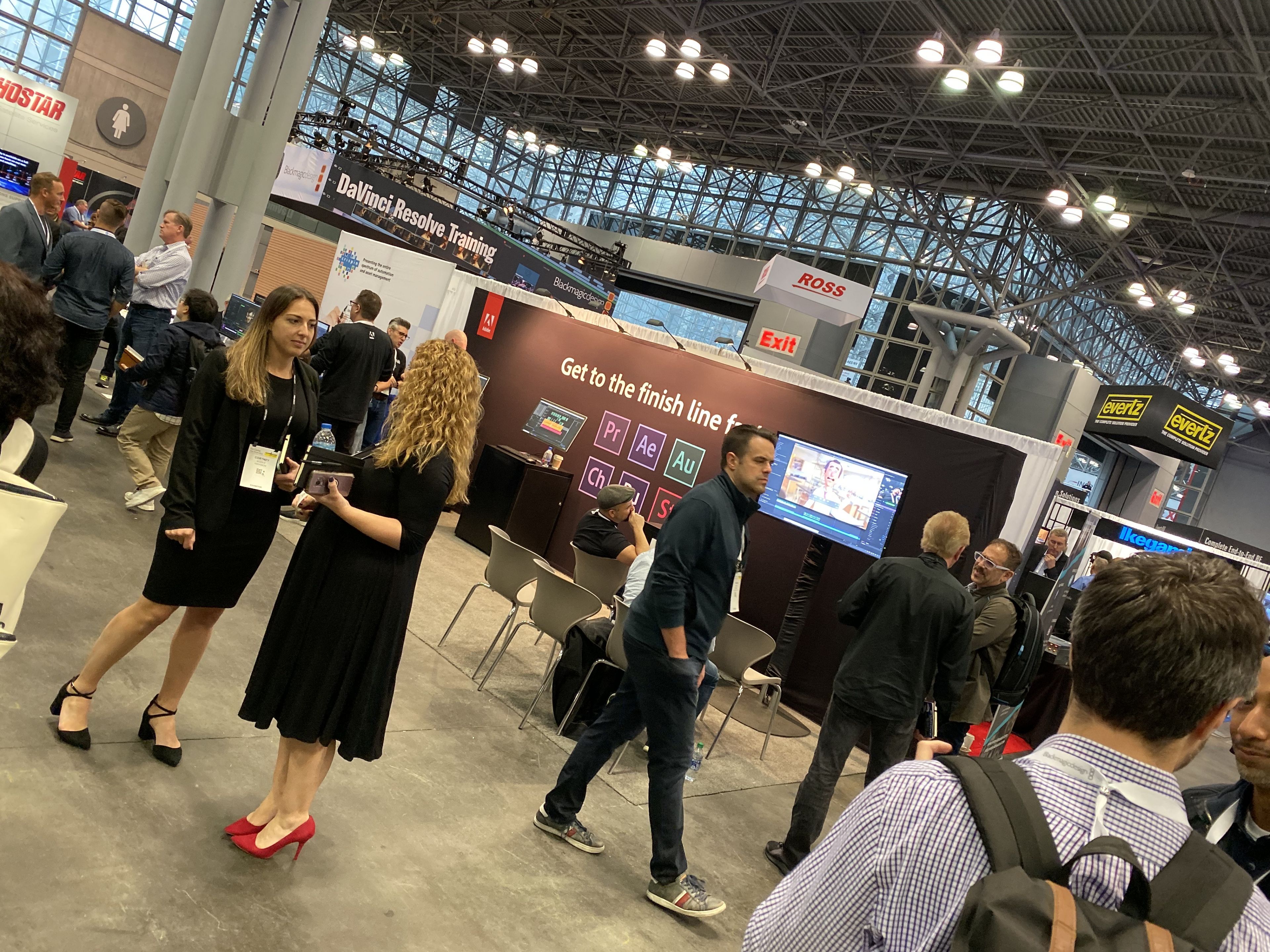 It was just pipe and drape, a backdrop, a couple of computers and some chairs. This wasn’t unique to Adobe as that is the vibe of NAB Show New York – small. But with small comes the ability to really take your time and wander around stopping at every booth you would like to stop at. Very little pushing your way through a crowd and very few people who act too tired to talk. The show floor only runs for two days so it’s short and sweet.

The camera companies had just a few cameras on tripods. The monitor companies just a few monitors on tables. Shared storage companies had pared-down versions of what could be much larger systems if that’s what you want to buy. Like NAB there are a lot of infrastructure companies that sell a lot of really important gear that is needed in the world to made broadcast and OTT television work. Many of them were there. Like NAB Vegas I skip over those as they aren’t my thing.

Also like NAB Vegas Blackmagic Design had the largest and booth of the event right inside the front door. While the largest NAB Show New York booth is still quite small it was an investment for BMD as, like NAB Vegas, they offered hands-on training right on the show floor, only in a smaller capacity. 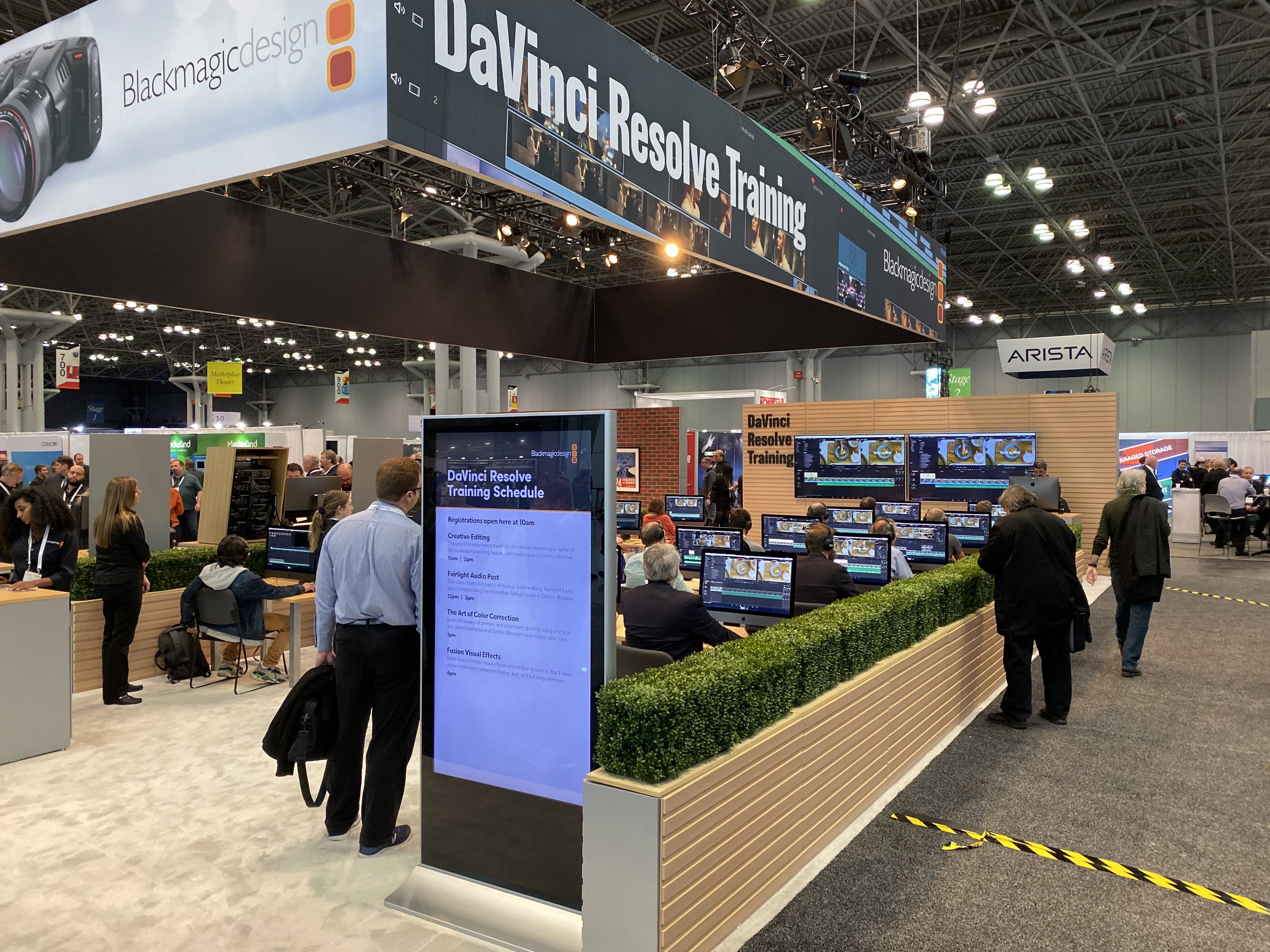 I was teaching for Post|Production Conference NYC which ran on a floor beneath the exhibit hall and while it was small both in room size and classes offered that intimate setting was a great way to talk to attendees and answer questions. I really like it a lot and we offered a wide range of classes.

One thing I noticed is that there were a lot of stages on the show floor and a lot of good keynotes and speakers throughout the two days of the show. Given that you can probably score free exhibit tickets you could hit a lot of the on-floor sessions and come away with some good learning for no show cost. Who doesn’t like a free education (assuming you didn’t have to pay for NYC travel which can get expensive)? 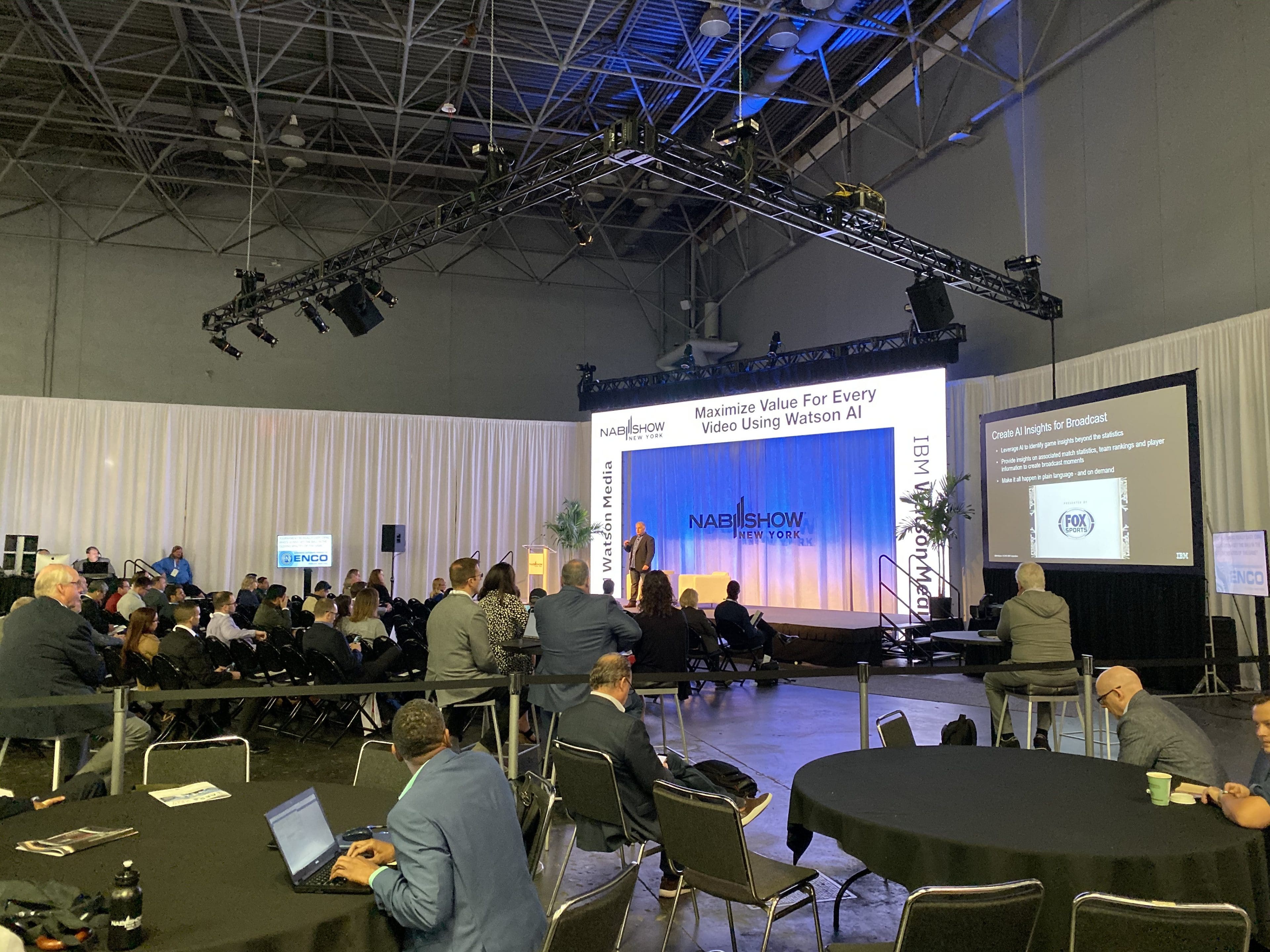 Of course, the best thing about NAB Show New York and something it will always have over NAB Vegas is that it isn’t in Las Vegas but rather it is in New York City. While both cities are big, bustling and busy I would always choose to visit NYC over Vegas any day of the week. If you ever wanted to justify the cost of a trade show with some vacationing around it (hey tax write off!) then any trade show in New York City would be a good one to attend. Even better if you can get your employer to pay for it.

Our friends at Post magazine were there doing some video coverage and they threw a great party on a rainy Wednesday night of the show.

Ahh yes it was a Nor’easter that brought the Wednesday rain and wind gusts up to 60 mph on the Thursday of NAB Show New York. It was a true NYC experience! I forget to grab a copy of Student Filmmakers Magazine. 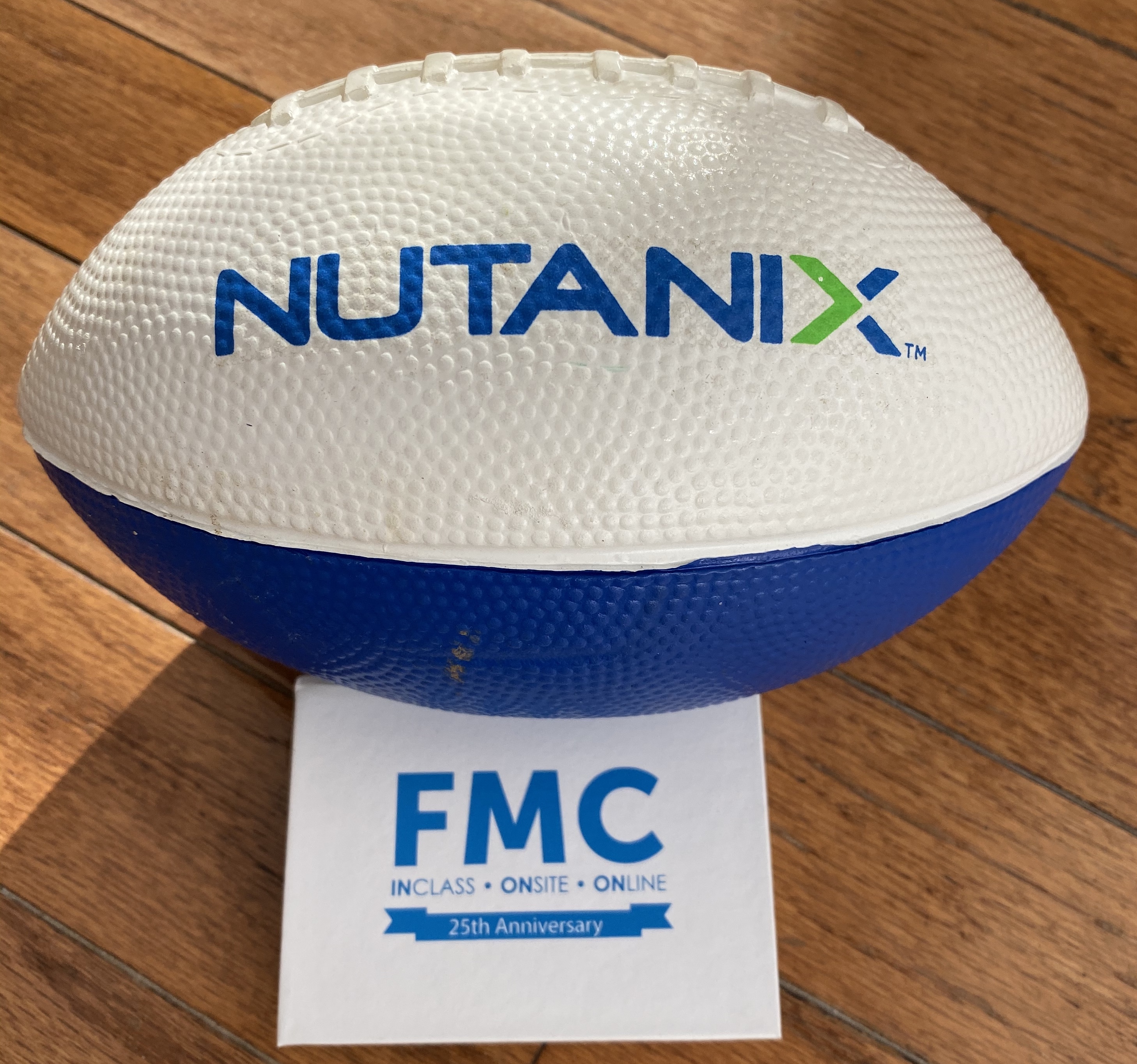 My favorite swag from the event was the Future Media Concepts post-it note pack (can you ever have too many?) and the Nutanix football. And I learned a lot about Nutanix and its enterprise cloud services and infrastructure. In fact, if you go to NAB for swag then NAB Show New York is a great place to score some.

NAB Show New York was previously Content & Communications World (CCW) but the rebranding makes sense to build on the NAB name. Show attendance has increased over the years. 2018’s 15,097 attendance might seem downright terrible compared to NAB Vegas and the near 100,000 that attends there but if it’s good enough for the vendors then it’s good enough for attendees on the East coast who might not ever be able to make it out West. In a perfect world, we’d see NAB Show New York grow to rival the show in Vegas and give us an alternative to actually having to go to Sin City. I doubt that it will ever get that big but it doesn’t hurt to dream.

A few more pics from the show below.

At #NABNY? If you are, stop by booth N954 to say hi & to view some #lights from Quasar Science, storage from @GlyphProTech, DIT support from @inovativcarts and more! We also have some show specials! #nabnyc #NABShow #NABShowNY pic.twitter.com/rAaP0zuS1N

But you could have found some of your favorite products at our sister company Filmtools’ booth on the exhibit floor.