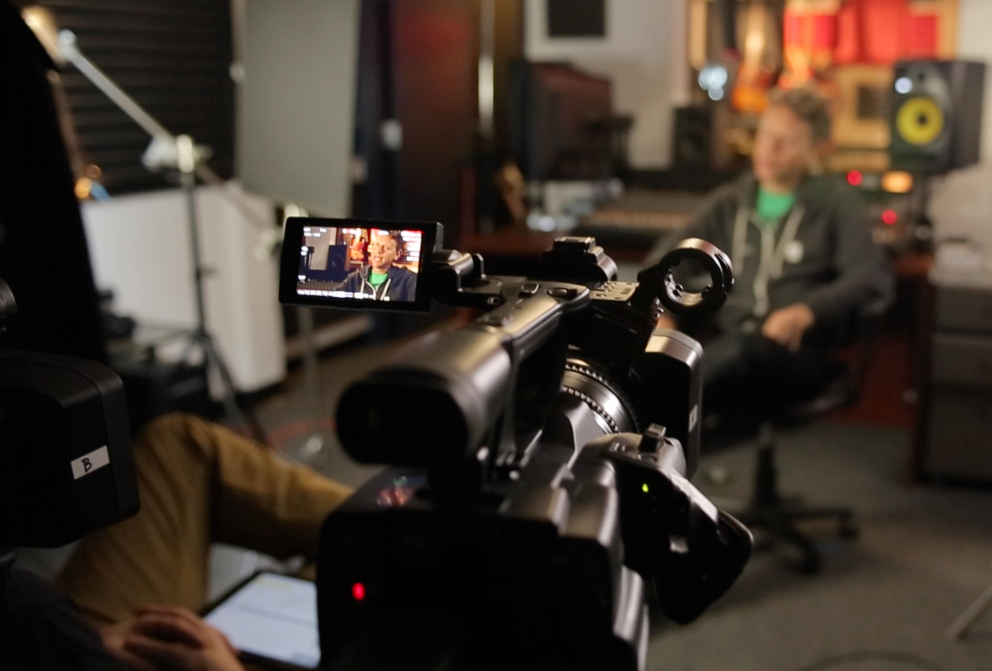 Interview with Martin Gore (Depeche Mode) for Notes for Notes’ This is Eleven documentary, shot on Sony’s PXW-X180

Notes for Notes also got some support of its own from Sony’s PXW-X180 pro camcorder, which was used to capture the concert for an upcoming promotional film about the benefit. Separately, Notes for Notes also used the Sony camcorder to shoot interviews with noted artists about their personal music –life moments for a documentary called “This is Eleven.” Here, N4N’s Philip Gilley, N4N CEO/co-founder; Seamus Frawley, Director; and Rocker Meadows, the DP for this project, talk about their experiences shooting both pieces with the Sony PXW-X180.

Shooting live events always presents a unique set of production challenges. What did you encounter on this project, and how did the X180 help?

Seamus Frawley (SF): We were shooting in a concert environment where we didn’t have any control over the lighting, where our subjects were going to be, or even where we could be positioned. First and foremost, this event was about raising money for the organization. The people that paid to see the show wanted to enjoy the show without having their experience interrupted by a film crew. It was really important that we didn’t negatively impact that experience.

Rocker Meadows (RM): The size of this camera and the length of the reach of the zoom were fantastic. The fact that it has focus stops was great. The image quality was great, the ability to turn the gain up and be able to get shots in low light – all that helped us do what we needed to do.

Did you evaluate other cameras before choosing the PXW-X180?

RM: We looked at a range of cameras, including larger-format models. A camera is a tool. I’ve been doing this nearly 30 years as a cameraman and I would never pick any one camera for every job. A camera for me is always dictated by the parameters of the project.  For this project, the X180 was the perfect tool for what we were doing.

This camera is simple to operate, and very user-friendly. You can put a follow focus on it because it has the lens stops. It has all the right buttons in familiar places. You can put it on a tripod and get really good, balanced audio in. You can upload the content into a format that’s almost instantly digestible by the editing team.

When we started to evaluate cameras for this project, one question that came up [about the X180] was “why is Sony making a one-third inch camera. Isn’t everybody else going bigger?” That might be true, but in this case, for what we do, a one-third inch chip was a great choice. I would not have wanted a bigger chip because it makes everything related to grabbing images that you don’t have control over much more difficult. It requires you to have bigger lenses, it means focus is shallower – everything is much harder. So while the industry may be moving away from one-third, [Sony] is making a product that really fills the bill here.

RM: The images weren’t too “contrast-y.” You see deep enough into the shadows and the highlights held really nicely. We didn’t have to pump up the gain so much, which is great because eventually you end up losing detail in your shadows because you’re trying to get some kind of lighting control over the image. It worked out really well. I was able to get images that were very pleasing, especially in a situation where we didn’t have much control. That’s always a challenge and I think that this camera is great for that type of shooting.

Were you able to be flexible and inconspicuous, while still getting the shots you needed?

RM: Yes, the cameras handled very well. Their size was great for this type of job where you have to be fast-moving and out of the way; a little non-descript. You don’t want to be there with a gigantic rig; you want to be incognito and still get amazing pictures. This is a great tool for that.

What type of footage were you shooting for these project?

RM: We were shooting concert footage [for the promotional film] ; a lot of run-and-gun type of production; and interviews [for “This is Eleven]. For the concert, we used three X180’s: one each at stage left and right, and then one at the FOH soundboard basically centerstage in the middle of the venue.

Talk about the different shooting conditions.

RM: The first night was a concert. It was all interior shooting. It was typical concert lighting so we had to deal with everything from the very bright highlights to areas with virtually no light at all. We had some musicians in the spotlight and others in varying intensities of other colored lights.

There was a lot of variable color temperature. The lights would go brighter and dimmer at any old time they felt like it. We could never depend on one constant lighting situation.  It was all tungsten lighting so all the lights started as tungsten at 3200 kelvin and they were colored with different gels. We balanced the cameras at 3200, and shot some of it in the median gain setting, but mostly with the iris a little bit closed down; not completely wide open.

The interview footage was shot inside a recording studio in Santa Barbara. For that we used LED lights that were balanced to 5600. That lighting was much more balanced and even because we had control over it.

How did the camera adapt to different lighting – bright lights, low lights. How did it perform under varying elements?

RM: The camera performed great. The general rule is you protect for your highlights to keep things from clipping. So it was very easy to set the camera up for that. It handled the bright lights really well and it has good latitude going into the shadows. It handled the changing intensities and the colors very well. It makes a very pleasing picture.

It was compact, high quality, flexible – everything you wanted in one camera for this project?

RM: Absolutely. For this project, something that was small, compact, lightweight and made a great picture was the perfect combination. This camera delivered all that exceptionally well.

I found the ergonomics to be very good. Two of our cameras were on tripods for the concert, and I used one on a monopod. Because this camera is so nice and nimble, I was able to manage that easily. If it had been a larger format camera, I couldn’t have done it. But even on the monopod I could go all the way to the end of the lens. I could stabilize myself against a pillar or even just hold the camera on the monopod and it still worked really well. I don’t think you could do that with many other cameras.

Any final thoughts on the concert and using the Sony PXW-X180?

Philip Gilley (PG): It’s very exciting for me and for us as an organization, to not only do what we do but to also have the opportunity to introduce an exciting new technology like this camcorder to our team and even to the youth we serve. We’ve always been focused on audio but video is an equally important component as well, and this project let us dance in both worlds and perhaps expand into making accompanying music videos.

This is the fourth year we’ve done this type of concert, and we’ve really raised our game each time, both in terms of what we’re able to raise financially, and also our level of production value.  A big part of putting together next year’s show is being able to show potential artists this year’s lineup, what we did and how well we’re able to showcase the artists’ talent. And then we can attract talent for the next show with a great-looking, visually exciting piece. Using such an advanced but easy-to-use camera like this is invaluable in that process.

What are your plans for the footage you shot?

PG: We’ll put together a few different pieces that we can use not only as a marketing tool, but as an archival piece for our organization. It’s just so rewarding to be able to highlight the stories of our youth. We sent one of them from Nashville out to California to be part of the concert’s opening, playing a set with Jimmy. It was his first time on a plane, and his mom’s first plane trip in 30 years! Now we have great footage of him at his very first concert performing with rock stars to a sold-out crowd. It was so crucial for us to have awesome footage to document that and we couldn’t have done that without Sony’s help and these cameras.

With the initial phase of production on the documentary complete, Notes for Notes is gearing up to shoot more footage and is exploring using a crowdfunding campaign to help fund the remainder of the production. The team there says, the finished piece is sure to amaze and all that can be said at this point is that “it goes to 11!”  To learn more about Notes for Notes® and the upcoming documentary please visit notesfornotes.org.