Digital Juice® announced today that it is releasing ready2go™ Projects & Templates for Apple Final Cut Pro® and Motion® Collection 08. The ready2go projects are graphical animated templates that provide Final Cut Pro editors and Motion artists with a variety of professional finished looks and feature expertly design “drop zones” for text and video. Editors and motion graphics artists can use them in everything from show opens, commercials and wedding video collages to DVD opens and video transitions – to name just a few of their many uses. 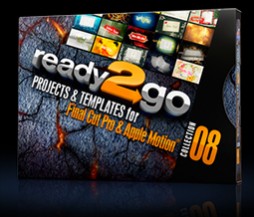 “One of the things that sets ready2go Projects & Templates apart from what other content providers produce is that Digital Juice includes multiple ‘edit friendly’ segments with each project,” says David Hebel, CEO of Digital Juice. “Final Cut Pro and Motion artists can build their own version of the project by placing an infinite series of edit-friendly text and video segments on their timeline to create the desired length and sequence. Each segment is also extendable up to 15 seconds and includes matching wipes and sound effects to help you transition between segments smoothly.”

In ready2go Projects & Templates for Final Cut Pro & Motion Collection 08, you will find over 65 unique and versatile multipurpose projects ranging from the subtle drama of waves crashing on a ruby red background to the urban look of a crumbling exploding concrete wall – to name just a few of the many creative looks in this package. “No matter what your level of skill in Final Cut or Motion might be, ready2go scales with you,” says Hebel. ” Want to replace video and text, no problem – drag, drop, and edit the text and you’re done. Want to change some colors, textures or turn off a few elements for a cleaner look? You can do that and much more as your skill in Final Cut Pro and Motion grows.”

Browse, Search & Select
Digital Juice® provides a free Windows® and Mac® utility, Juicer™ 3, that makes it easy to browse, search, and select from any of the ready2go™ Projects & Templates for Apple Final Cut Pro and Motion collections. Juicer™ 3 preview technology allows users to preview ready2Go content within the Juicer™ 3 browser without having to first load the full resolution file into Final Cut Pro or Motion or any other editing application. In addition, since each Final Cut Pro or Motion project is made up of numerous QuickTime animations, the Juicer 3 technology gives users the flexibility to export the animations independently so they can be used in conjunction with any other project they might be working on.

Pricing & Availability
The new ready2go™ Projects & Templates for Apple Final Cut Pro® and Motion® Collection 08 can be ordered through Digital Juice’s online store (www.digitaljuice.com).The package’s retail price is $249.95 but it can often be purchased in special promotions for as much as 40% off. Check the website for details on specials. The company’s free Juicer™ 3 software can be found at www.digitaljuice.com/juicer/

Digital Juice® is the world-leader in royalty-free broadcast animation content for video, motion graphics and multimedia professionals. Digital Juice® products are in use in nearly every major studio, broadcast, and cable station including NBC, CBS, ABC, CNN, HBO, CNBC, Fox News, and countless high profile television shows such as American Idol and the Grammy Awards. The company provides royalty-free animations, music, stock footage, organic film effects, graphical fonts, layered Photoshop® illustrations, Adobe After Effects® and Apple Motion® project files, plug-ins and production gear to a wide variety of video, motion graphics, print and web enthusiasts. The company is known for its extremely high quality and innovative content as well as for its aggressive and affordable pricing.