At CES, the well known CDN (content distribution network) Livestream introduced the innovative Movi 4K streamcorder which can replace up to nine 720p cameras for live switching, recording, and live streaming. All of the live switching between the virtual camera sources takes place in the matching iOS app. This revolutionary 4K streamcorder normally costs US$399 for the standard version or US$599 for the Movi Pro, although there is a US$200 discount for early bird purchasers. With the introduction of the Movi, Livestream has also introduced a new type of camera segregation, which I’ll cover in more detail ahead in this article. 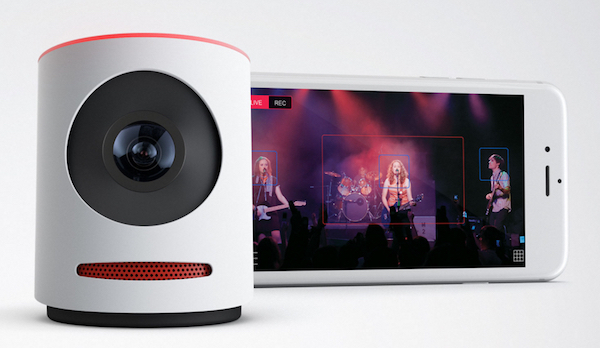 At CES, the well known CDN (content distribution network) Livestream introduced the innovative Movi 4K streamcorder which can replace up to nine 720p cameras for live switching, recording, and live streaming. All of the live switching between the virtual camera sources takes place in the matching iOS app. This revolutionary 4K streamcorder normally costs US$399 for the standard version or US$599 for the Movi Pro, although there is a US$200 discount for early bird purchasers. With the introduction of the Movi, Livestream has also introduced a new type of camera segregation, which I’ll cover in more detail ahead in this article.

For those unfamiliar, Livestream is one of several CDNs, or content distribution networks for video.

As I explained in my recent article Live streaming essentials from your multicam studio, CDN is an acronym for Content Delivery Network. Some examples of CDN services include Akamai, Livestream, Microsoft Azure, Twitch.tv, UStream, and You Tube Live. Some CDNs require payment. Others are free, because in many cases they insert their own advertising.

Why do I need a CDN?

You need a CDN because without it, it would be nearly impossible to have enough bandwidth to handle your potentially thousands or millions of live viewers. It will be enough of a challenge to get enough reliable bandwidth to transmit a high quality signal from wherever you are to your CDN. More details are in Live streaming essentials from your multicam studio.

As Jesse Hertzberg —CEO of Livestream– told Norm from Tested.com in this video:

The Movi shoots 4K and lets you switch to up to nine 720p regions to simulate a multicamera shoot with a single camera, without losing quality. This concept isn’t new. For many years, NewTek has been doing this with the TriCaster; JVC’s GY-LS300 can losslessly zoom through a prime lens; and Sony’s NEX-EA50 can do the same since 2012 (See Sony’s NEX-EA50 lets you zoom through prime lenses, losslessly). However, it is obvious that a TriCaster or either of those cameras is in a completely different price category from the Movi from Livestream, and that by going from 4K to 720p, much more cropping is possible without quality loss. There are both technological and business reasons, of which the latter I’ll cover later in this article.

The technique of taking a 4K signal and dissolving or cutting to a smaller one has been taking place before, but in editing software, not live. This is likely to become a trend.

In addition to the built-in beamforming microphone which focuses the same area as the cropped image, the Movi also has a built-in USB input to connect many of the digital microphones and analog-to-digital converters (ADCs) I have reviewed here in ProVideo Coalition. It has not yet been announced whether the Movi camera or its companion app with be able to combine a dual mono audio from a “stereo” ADC to mono for streaming, but I hope it will. If not, a mono ADC could be connected to an analog mixer, or one of the very few ADC with centering capability could likely be used. There is also the option of inputting analog audio from a mixer to the iPhone’s TRRS 3.5mm connector.

What is missing or troubles me about the Movi

Movi’s segregation, and how it reminds me of a locked mobile phone

Remember when people used to think they were paying only US$199 for a high-end smartphone that outright truly costs several times more? This awakening has been very recent for many in the US (even though I have been purchasing unlocked phones for almost two decades), but more apparent to many Europeans. Well Livestream is selling the Movi as a locked streamcorder, since it will only work with the Livestream CDN. Just like the phone companies used to do: They sold the phone well below cost, but locked you into your monthly fee, The phone company made you sign a contract and locked the phone to its network. Although Livestream may not make you sign a contract, the company has restricted the streaming function of the Movi for use with the Livestream CDN. As Jesse Hertzberg —CEO of Livestream– said, the company is offering streaming plans starting at US$10 per month, although he didn’t mention what amount of bandwidth or streaming time will be included in that plan. That US$10 plan will likely include both Livestream branding and ads, since the lowest plan without ads on Livestream.com currently costs US$42 per month, and the lowest with white labeling and branding control currently costs US$799 per month if you prepay a year (i.e. US$9588 for the year), or US$1299 month-to-month without a contract. On the other hand, the YouTube Live CDN is free.

This is not the first time Livestream has done that. Livestream offers a line of segregated encoders to connect to your existing camera to make it a streamcorder. Apparantly, they are re-branded Teradek models with new firmware to make them work exclusively with the Livestream CDN, at a much lower price than purchasing the original model from Teradek.

I have covered streamcorders before, and they are all open for use with any CDN. As I write this article, I have seen no other similar offerings for a single camera with up to nine 720p views for anything close to the prices of the Movi, which normally costs US$399 for the standard version or US$599 for the Movi Pro, although there is a US$200 discount for early bird purchasers. Considering that Livestream’s core business is the CDN service, not hardware manufacturing, it is unlikely that the company will be interested in selling an unlocked version of Movi, but anything is possible. I also clarify that although Movi is locked for live streaming, it is fortunately not locked at all for VOD (video on demand), where after shooting and switching live to a local 720p recording, you can then upload to on-demand CDNs like Facebook, YouTube, and probably Vimeo (Pro). Just not YouTube Live or other live video CDNs. The Movi or Movi Pro sounds irresistible. Being locked into a single live video CDN may not be. The choice is yours. More info at GetMovi.com. I will review the Movi if they send me one to review 🙂