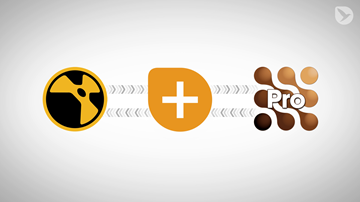 “MochaImport+ for NUKE is a great collaboration tool, making it super easy to have a seamless workflow between mocha and Nuke. Whether you are bringing your planar tracking, stabilized shape data or lens distortion maps into NUKE, adjusting with MochaImport+ for NUKE can be summarized in three words: easy, artist-friendly and pretty rad!” Mariana Acuña, creative specialist, The Foundry. Attendees to the NAB 2014 exhibition can see MochaImport+ for NUKE along with other Imagineer solutions on booth SL3331.

“It’s exciting to watch the eco-system surrounding mocha grow with innovative products from partners like mamoworld. MochaImport+ has proven to be a very useful utility for the After Effects community, and we expect the same satisfaction with regards to NUKE,” comments Ross Shain, chief marketing officer, Imagineer Systems. “NUKE artists build in-depth compositing scripts to solve problems, but integrating an external tool such as mocha can slow the process down, especially for the more novice user. MochaImport+ for NUKE streamlines and simplifies the process to deal with mocha’s roto, 2D and 3D data. The ability to paste mocha’s planar-tracked data directly into a choice of NUKE nodes (including MeshWarp or stabilized pre-comp) will really come in handy for digital beauty and paint work or simply dealing with problematic composites.”

In addition to the popular stabilized precomp features found in the popular MochaImport+ for After Effects, MochaImport+ for NUKE lets users easily target and import mocha Pro tracking data into NUKE node categories: Tracker, Roto, RotoPaint, GridWarp and Transform. Detailed data such as position/scale/rotation as well as shear and perspective are seamlessly shared across applications. MochaImport+ for NUKE also provides a one-click solution for mocha Pro’s  camera solver FBX data as well as a NUKE script for mocha-solved lens distortion data in the new CornerPin node.

To qualify the utility, mamoworld ran an extensive beta program, putting the application through its paces in real-world situations. Nicklas Larsson, a VFX artist from SVT in Sweden was one of the first to test-drive the utility. “mocha Pro and NUKE have long been friends. But with MochaImport + for NUKE, the programs have been welded even tighter.” Longtime mocha Pro and NUKE artist Andy Needham also participated in the program and commented on the value of the new offering, “We’re always looking to improve our workflow. MochaImport+ for NUKE will save you time.”

To learn more about MochaImport+ for NUKE, please visit: http://www.imagineersystems.com/products/mochaImport.

See it in Action at NAB 2014
Mathias Möhl of mamoworld will be joining Imagineer Systems at the NAB Show in Las Vegas, April 7th through April 10th. Visit booth SL3331 to see MochaImport+ for NUKE in action or to meet with the developers.

About mamoworld
The team at mamoworld develops software for VFX and motion graphics, with a focus on workflow tools that let you do your job faster and easier. mamoworld is known for its After Effects tools, such as MochaImport+, Auto Lip-Sync, Beat Assistant and iExpressions. With MochaImport+ for NUKE, mamoworld expands its reach, taking the first step towards making its product line accessible to more users of other compositing software. To learn more about mamoworld, please visit: http://mamoworld.com/

About mocha: Academy Award-Winning Technology
In February 2013, Imagineer Systems was honored by the Academy of Motion Pictures Arts and Sciences with a Scientific and Technical Award for mocha and its Planar Tracking technology. Imagineer Systems’ Philip McLauchlan, Allan Jaenicke, John-Paul Smith and Ross Shain were selected as a winner for mocha and its underlying Planar Tracking technology. The company was recognized for its proven record of contributing significant value to the post-production process of making motion pictures.

Over the years, Imagineer’s mocha software has gained acclaimed notoriety within Hollywood’s visual effects community for its ability to “motion track” problematic footage such as out of focus and marker-less areas helping enable a technique called “digital makeup” or “seamless effects.” Visual effects artists use planar tracking to magically transform actors and locations without requiring timely makeup sessions and expensive sets, allowing directors to make important creative decisions long after the performance has been captured. Capturing accurate movement is essential and mocha has been involved in some famous digital makeup examples such as the snake-like noseless Lord Voldemort in the Harry Potter films, replacing Mystique’s eyes in X-Men and helping Natalie Portman undergo an amazing transformation in Black Swan.

About Imagineer Systems
Imagineer Systems Ltd is the Academy Award-winning developer of visual effects solutions for film, video and broadcast post-production markets. Imagineer Systems has made its mark on such marquee Hollywood blockbuster productions as The Hobbit, Black Swan, The Amazing Spiderman, Invictus and the Harry Potter series. Imagineer’s desktop product line consists of mocha Pro™ – roto, planar tracking, compositing and removal utility; mocha AE™ – a planar tracking and roto utility designed for After Effects and Final Cut Pro users. Imagineer Systems was founded in 2000 and its headquarters is located in Guildford, United Kingdom.