Method Studios, a Deluxe Entertainment Services Group company, has collaborated with agency David&Goliath on two commercials for KIA which premiered during Super Bowl XLVII. “Space Babies,” directed by Jake Scott (RSA), and “Hotbots,” directed by Carl Erik Rinsch (MJZ) provided a wealth of inspiring VFX challenges to Method's creative team in Los Angeles. Stephanie Gilgar, Method Studios' Executive Producer comments “It's an honor to have been entrusted to deliver two of the most VFX-heavy ads seen during this year's big game – a yearly highlight in the US television commercials industry”. 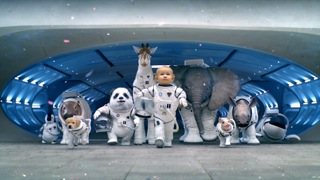 The 2014 KIA Sorento Limited is promoted in “Space Babies” which aired during the final quarter of the Super Bowl. The script involves a six-year-old boy posing the classic “Where do babies come from?” question. Caught off guard, his Dad conjures up the wondrous tale of “Babylandia” in an attempt to answer his curious child. In order to visualize the mystical planet, the Method team developed CGI environments, rocket ships and a host of infant creatures including penguins, elephants, pandas and giraffes, hippos, and more. The commercial can be viewed here: http://on.aol.com/video/kia–sorento–517661823.

“It was important to Jake and DnG that the CG world and animals retain an element of whimsy,” says Method VFX Producer Mike Wigart, “we needed to create something realistic while making sure it has a sense of something imagined”. Method VFX Supervisor Andy Boyd adds, “From a VFX standpoint, it was all-encompassing: CG animals, vehicles, clothing, environmental elements, matte painting, compositing – it was amazing to see the project well executed across so many different areas of expertise. 'Space Babies' was a huge team effort”.

Also relying on humor, but pitched towards a different target market, is the ad for the new KIA Forte which debuted during the third quarter. Method's focus for this spot was to conceptualize and construct the “Hotbots” – a futuristic take on an auto show model who is overly protective of the attractive Forte. VFX Supervisor Benjamin Walsh notes “After discussions with Carl and the agency creatives, we concluded that the best methodology was to shoot practical models and track CG mechanical components on top. We combined the best features from around 20 different concept designs to come up with a unique and sexy looking Hotbot.” 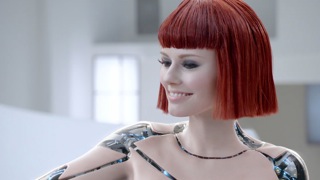 Due to the success of CG skin lighting tests, it was determined that only the live-action heads and dresses of the models would be kept and the arms, chest and legs would be replaced entirely. This meant that very precise animation was required in order to match up the 3D limbs with the live action. Attention was paid to crafting the mechanics of the joints and the vein-like wires which glow blue with energy. The commercial can be viewed here: http://on.aol.com/video/kia-forte-517661800.

During post production, Method Studios linked in with Company 3 and Stefan Sonnenfeld who provided the final color grade for both commercials. The grading of “Space Babies” was of particular importance during the multi-step look development process with Method, which offered the KIA clients creative input as the project developed.