A major change, and potentially crippling bug/glitch, might leave you scratching your head!

I’m a HUGE After Effects user.  In my day job as a commercial editor, I use it just as much if not more, than I use Media Composer, and I’ve been using After Effects for a while.  Well, since version 3.1, and I don’t mean CC 3.1, or CS 3.1.  I mean way back before all of that.  I’d say that I’m pretty much an expert user of After Effects, so when there’s an update to the Adobe Creative Cloud, I’m right there to download the newest version, and start using the new features, except something has happened with the latest release, CC 2017, of After Effects.  Adobe has, for whatever reason, decided to change the way After Effects (and Media Encoder for that matter) deals with the Avid QuickTime codecs.  This, compounded by what appears to be a crippling bug/glitch can create havoc for Windows users.  Mac users can always switch to the ProRes Codec, as it’s supported natively in Media Composer, but unfortunately, my day job is on an HP Z820, so exporting ProRes is not an option for me.  Let’s take a look at the way things were, versus the way things are now.  Now, before we do that, I do want to mention that there have been systems that I have now come across that don’t seem to be experiencing this bug/issue, so if you have one of those systems, keep this article in your back pocket, in case you run into any similar issues.  Also, don’t forget that when you install After Effects CC2017, you have the option to keep the previous installation version, which is always a good idea, when a new version is released.

In just about every version going back as far as I remember, the Avid Codecs in After Effects have always been the same, and straightforward.  When venturing into the Output Module, and selecting QuickTime as your export format, you would immediately head into the Codec Settings, to set everything up for your export.  The first option is to choose which HD or larger than HD codec you want to work with – Avid DNxHD or the newer Avid DNxHR codec.   Of course there are other Avid Codec options (SD, JPEG 2000, MPEG2 50 mbit), but for right now, let’s focus on the main two. 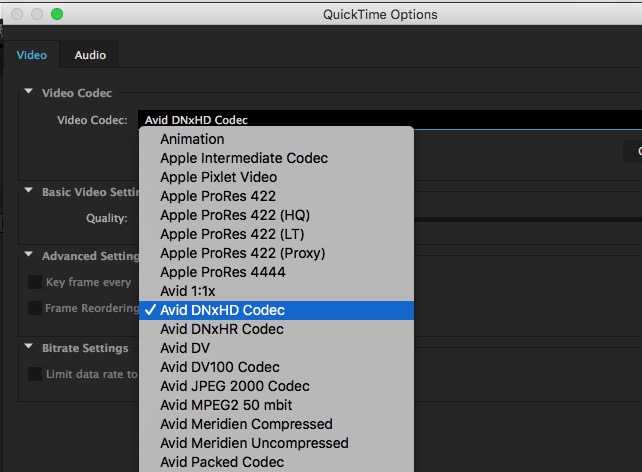 Once you’ve chosen which codec flavor you want to export as, you’ll now need to set the specific resolution.  This has always been simple and straightforward.  For DNxHD, you basically have all the flavors of the codec to choose from, based on the frame size and frame rate you are working with.  What’s EXCEPTIONALLY important about how this is set up is that it directly mimics what editors see inside of Media Composer, when they are setting up their Media Creation settings. 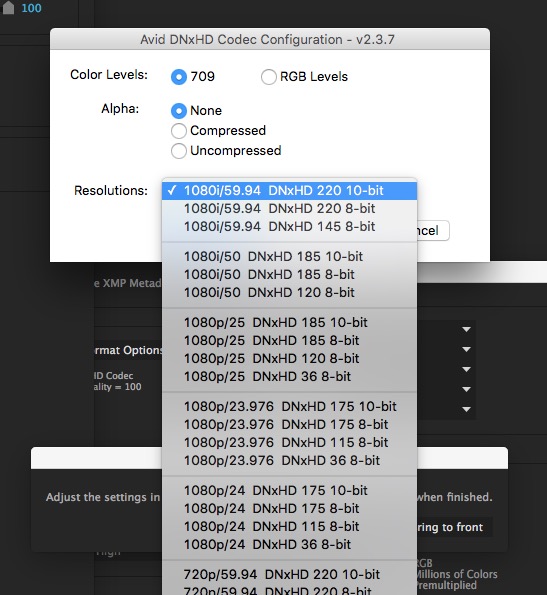 More or less the same goes for DNxHR, except we have way less codec options.  Basically just Low, Standard, High (8-bit), High (12-bit) and 4:4:4.  Again, fairly self explanatory as it, again, mimics exactly what we see inside of Media Composer. 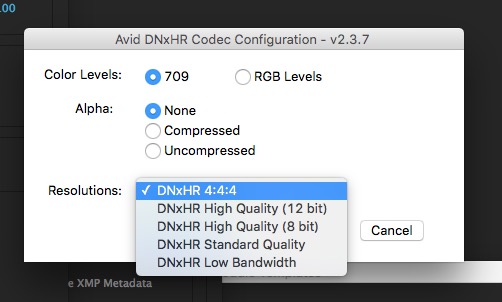 This workflow is also exceptionally helpful for editors who are new to Media Composer, as it makes the workflow as smooth as possible, and also lessens the chances that they will make a codec error somewhere along the way.

Originally, when I updated to AE CC 2017, I updated my system to Media Composer 8.6.4, so I was thinking that maybe Avid had updated the codecs, which is what might have been going on, but once I re-installed CC 2015.3, I knew that the 2017 update was what was causing the change to the codec layout, as everything was copacetic in 2015.3 .  Now when you go to the output module to set up your codec, DNxHD and DNxHR are now combined into “one” codec. 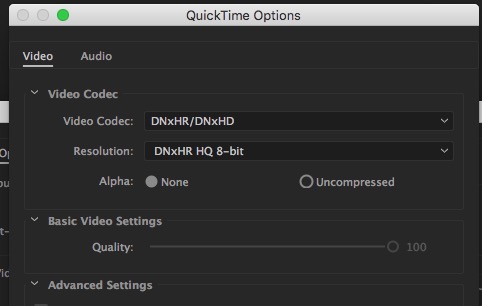 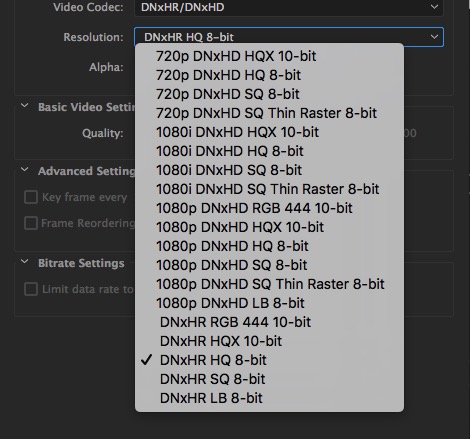 I’m going to assume that for argument sake, what I’ve just lined up here makes sense, and you should be able to easily translate the old to the new.   Now, there’s something very important that I want to point out (and you can get a great insight from Michael Phillips and his great article over at 24p.com on these changes).  These changes to the codec structure come because of Adobe’s (and pretty much every company out there’s) ended support for QuickTime inside of their product line (After Effects, Premiere, etc), and their move to their new proprietary MOV reader/writer.   Because of this, they have gone back to the DNxHD/DNxHR SDK to create the interface in the Output module for After Effects 2017.  The only issue is that the SDK does not provide a configuration dialog, that has to be done on the application side, so when the development team re-build the Avid output module, we now have the HQX, HQ, SQ and LB formats.

Now, with all that being said, I’m shaking my head a little, as you would think they would have adopted these changes in Media Composer first, instead of by having their third party partners be the first. Please note the below from chart Michael’s article that breaks down the new codec structure.

So now you have:

This new layout will be exceptionally confusing for new editors, as it took me, an experienced After Effects and Media Composer editor a few minutes to figure out what they had done.  All this would be passable except for one major problem, and that is that I have stumbled across a very annoying and, if you don’t know how to fix it, crippling glitch.  I’ve tested this on five different machines.  One Mac and four PC’s, and I’ve been able to recreate the issue on all the machines, but have also come across systems that seemingly don’t have this problem, but can develop it very quickly.  Once I selected the codec I wanted, and it doesn’t even matter if I choose DNxHD or DNxHR, I got a codec error that basically says that the format constraints for the selected codec is one frame per second, which it obviously should not be.  The codec I chose should match the frame size and frame rate of my timeline, which in my case here, it does.

Now, if you render out a five second animation using the Avid DNxHD or DNxHR codec your export will be 120 seconds, as opposed to being five seconds.  Once second for every one or the 120 frames that makes up five seconds.  Here’s the info on a five second and ten frame 23.98 clip I rendered out at DNxHD HQ 8-bit. 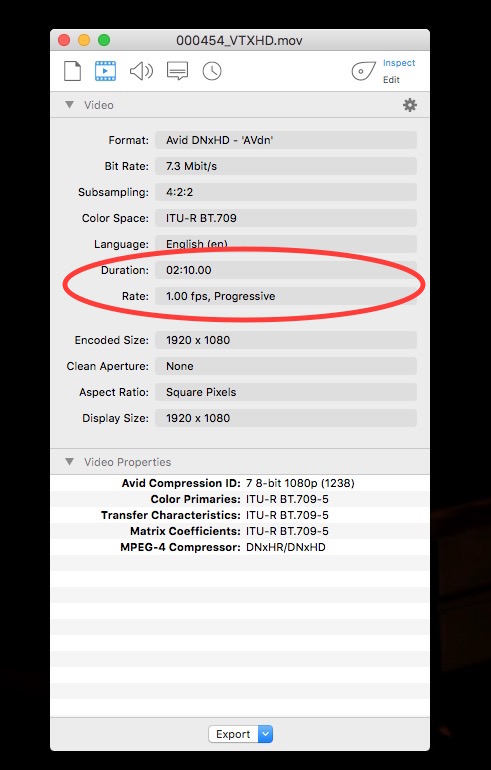 This is only really a big deal for Windows editors, as Mac editors can render out with the Media Composer friendly ProRes codec, and bypass this issue all together, as it does not produce the same “Settings Mismatch” error, as the Avid codec does.

So, that does bring up the big question of exactly what is going on here, so I decided to do a little test to see if could get to the bottom of what’s happening.  I took a system that had nothing on it.  No Media Composer, After Effects or even QuickTime.  I started out with After Effects.  Installed no problem and the output module worked the way it should.  I could export with the Avid Codec.  Next, QuickTime 7 installed.  Again, no issues, everything running fine.  Last, Media Composer and, again, no issues.  So what’s different here than on my current system?  Well, after a quick post on the Avid Editors of Facebook page, it hit me.  Clean install on the laptop, with no prior preferences hanging around, vs installation of After Effects on a system that has gone through about 4-6 different After Effects versions, so I figured I’d blast away the Preferences to see if that would fix the problem and, guess what, it did!  There’s something going on in the preferences that causing this error, and once the preferences are trashed, the problem seems to resolve itself.  Now, with that being said, I did have the issue come up again, and this time I deleted the preferences from within the General Preferences, and I haven’t had it creep up again, but I have been told through the Avid Editors of Facebook that an editor was having codec issues after going back to an old project, or with and older output module so keep that in mind.  I should also point out that the preferences can corrupt (for lack of a better word) themselves, and put you into this situation, when you open up a project with older Output Modules set up in the Render Queue.

Now, with all of that being said, there were some other concerns I had with the new Avid codec setup in After Effects and that is that when working in 2015.3, the 1080 29.97p codec has it’s own selection in the main list, but in 2017, you would need to select the 1080p option (with whatever LB/HB option you want), and After Effects seems to recognize that the composition is 29.97, and chooses the codec accordingly.  Last and, in some cases, most importantly is that editors have now lost the option to export with RGB levels, and you are now restricted to REC 709 as your only option.  For me, that’s not that big a deal, but I’ve heard from editors who won’t upgrade because of this.  Again, this is not an issue from Adobe, this would come directly from Avid!

To be honest, I find the reasoning for all of this to be, well, odd.  There was absolutely no reason to do this, and I’m not sure what benefit it brings to editors, except confuse them in their workflows between Media Composer and After Effects.  And, one thing that I also want to mention is that Adobe needs to step it up and include more of a diverse group of testers in to beta test After Effects before it ships to the general public.  I can understand that they want to have motion graphic designers, but FCPX, Vegas and Media Composer editors should be involved on their beta team, as they are a huge market for this application, as direct input from Media Composer editors would have flagged this issue, and addressed the odd bug/glitch before it was shipped to the general public..

Media Composer editors, there is no reason not to update to the new CC 2017, but arm your self with the knowledge of what do to if you run into my dreaded “Settings Mismatch” error, as it’s more of an annoyance than anything, and take things a little slow when wrapping your head around the new codec layout, especially if you’re new to Media Composer and After Effects, because if you take a little time and think it through, you should have no problems moving ahead with your project.  Oh, and give Michael Phillip’s article a read to get a more in-depth understanding of what has been changed to the DNxHD codec, and what you need to look out for when using it!