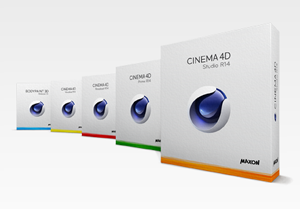 “With improved and added tools such as digital sculpting, camera matching and tighter integration with leading third-party applications, R14 offers the innovation on which individual artists and design teams have come to rely on to create compelling 3D content for any medium – from film and broadcast to architectural visualization and mobile games,” says Harald Egel, co-founder and CEO of MAXON Computer.

The following is a brief overview of the over 200 productivity-boosting features in CINEMA 4D R14, available for both Mac OS X and Windows.

Click here for details and to see CINEMA 4D R14 in action: http://www.maxon.net/products/new-in-cinema-4d-r14/overview.html.

Headquartered in Friedrichsdorf, Germany, MAXON Computer is a developer of professional 3D modeling, painting, animation and rendering solutions. Its award-winning CINEMA 4D and BodyPaint 3D software products have been used extensively to help create everything from stunning visual effects in top feature films, TV shows and commercials to cutting-edge game cinematics for AAA games, as well for medical illustration, architectural and industrial design applications. MAXON has offices in Germany, USA, United Kingdom, France, Japan and Singapore. MAXON products are available directly from the web site and its worldwide distribution channel. Specially priced learning editions of the company’s software solutions are also made available to individual students and educational institutions. For additional information on MAXON visit www.maxon.net.

All trademarks contained herein are the property of their respective owners.