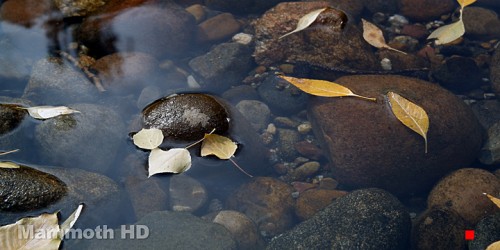 Mammoth HD’s new MHD/RED Library opens with footage shot on the RED Digital Cinema – RED ONE Digital Camera. The RED ONE captures images in 4K, 3K and 2K resolutions with frame rates from 1-75 frames per second depending on the resolution selected. This completely digital acquisition pipeline produces beautiful, clean images that can be used in every production from Feature and Indie films, advertising/commercials and marketing to HD broadcast and HD digital signage/display. The down-converted images to all the HD and SD formats are fantastic as they are over-sampled from the original files.

The ultra-large capture frame also offers the ability to scale, crop, pan/scan within the original frame for the optimal fit to anything from a film project down to a SD single online presentation. To see just some of the possibilities of the RED 4K format, check out Mammoth HD’s size comparison demo: http://www.mammothhd.com/MHD_compformat2.html
MHD’s launch of the MHD/RED Library features the work of a very talented band of early adopters of RED – Steve Gibby, Ken Corben, Steve Tammi, Jay A. Kelley, 42 Productions, Eli Jarra, Jochen Schmidt-Hambrock and Thor Wixom.

The MHD/RED Library’s initial offerings include Lifestyle, Family/Kids, Scenics, Wildlife, Nature, Underwater/Ocean Life, Locations, Recreation, Scenics, Transportation, TimeLapse, Sports and Weather. New clips are being added almost daily as we gear up with our shooters submissions. As more RED cameras are delivered over the next few months the MHD/RED talent base will be expanding with new locations, subject and styles.

Mammoth HD’s demo reels have also been expanded to include the new MHD/RED Reel-1 – the first of a series of online demo reels to feature footage shot on RED. The MHD/RED Reel-1 is also featured at Apple’s Quicktime HD Gallery in 4 sizes including SD, HD720, HD1080 and 2K, along with the MHD 2007 HD Demo Reel.

Interest in 4K footage has been intense since RED introduced their RED One camera at NAB 2 years ago and anticipation for RED 4K acquisition has been building as the Cameras began shipping last fall.

“RED is pleased that the Mammoth HD Stock Footage Library has chosen the RED ONE to be the 4k acquisition tool of choice.” said Ted Schilowitz/Red Digital Cinema Company, “The team at Mammoth HD has been very forward thinking in their choice to make RED part of their world, and we believe they offer a unique option for their customers, looking for stunning footage that only a true high resolution digital motion picture camera can achieve.”

The Mammoth HD/ RED Library is available for delivery as RED r3d (camera original files), dpx or tiff sequence files for the POST Production/Finishing Industry and Quicktime movie files in any Quicktime codecs for Video Production in 2K, HD and SD projects.

The Mammoth HD Library now feature over 580 Collections and over 300 hours of SingleClip Material – including RED 4K/3K/2K and Vertical HD for Digital Signage and Display.