Subtle changes in orientation and size can make a world of difference in the meaning of an image. 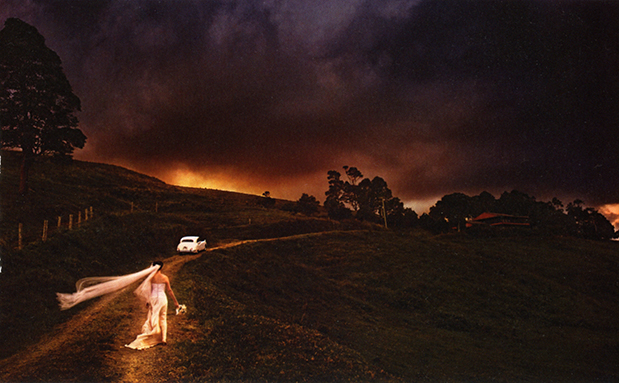 The arrangement of elements and their physical relationship to each other in an image is critical to visually putting across the meaning you want to convey without words. Ask yourself first, what is my story?

When you’re shooting for advertising or a personal event, the client’s story obviously trumps any editorial idea you might have dreamed up. Both Karl and I were immediately struck with the same opinion of this wedding image, which has been used in professional magazines as an advertisement for special effects software. The photographer shall remain nameless, though the dark, brooding, grunge style is recognizable as a contemporary fashion among some groups of image makers.

The image is beautifully composed, the colors luscious and the workmanship excellent. But let’s analyze what is going on in this story. It’s dusk, almost night. Clouds are gathering ominously, and the wind is blowing strongly. The road is rough and rutted. A bride in full regalia is standing, looking after a luxury car, which is driving away. There’s no place to turn in the road, and the car is already some distance away, so it seems the occupants have no intention of coming back.

We immediately take the meaning to be that the bride has just been put out of the car for some unknown reason and abandoned. Either that, or the groom gets to ride and the bride is forced to walk behind in the dirt. I have a hard time believing either is the client’s preferred scenario. Most brides I know wouldn’t take kindly to being left in the dust, holding nothing more than the bouquet, without a coat and a storm coming. This is definitely not a happy picture. 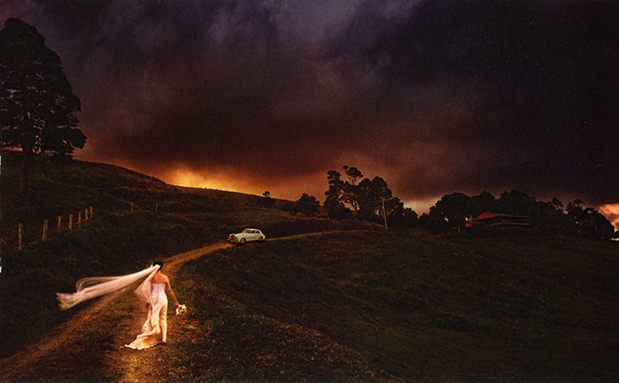 But wait! With just a few alterations in placement and orientation of elements, I decided to completely alter the meaning. I want a happy bride, anticipating the arrival of her groom. He is willing to risk his Rolls Royce on barely more than a dirt track in threatening weather to pick her up and whisk her away. Her knight in shining armor. How did I do it? I just turned the car around! Now it’s a meeting, rather than a rending of hearts. 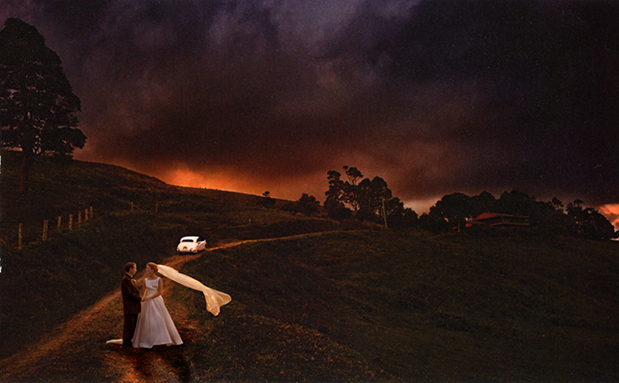 In this next variation, I dropped in one of my couples (the Rolls Royce by the way is not mine; I scraped it from the internet). Bride and groom have just been deposited by their limo. We don’t know why they’ve been left in the middle of the road, but that’s ok, because their body language shows them to be blissfully unaware of the coming darkness and rain. They’re in another world of their own, and we know that neither bad weather nor the rough road of life will affect them. 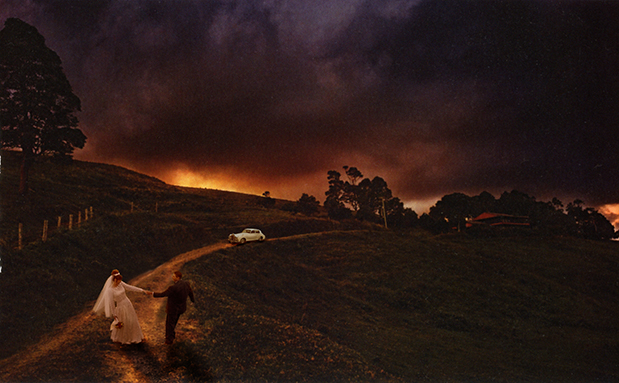 Another happy scenario finds this couple enthralled with each other’s appearance upon first meeting. Their limo is coming quickly to carry them away in luxury and safety, protected from the actual storm, which can also imply the storms of their future life together. 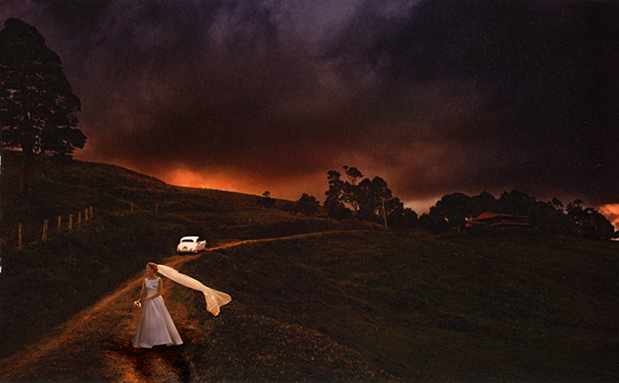 How far can I go with this game? If the bride is truly being abandoned, as in our interpretation of the original image, I prefer her to be taking an active, rather than passive role. In my version, I have her already turning away, making the break and starting on a new path, in spite of potential hardships and inevitable rain to come. 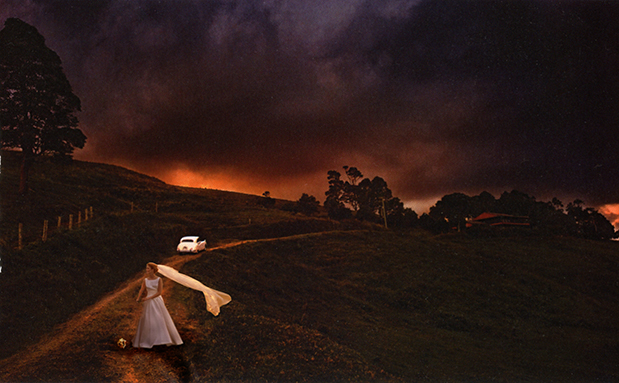 And if she’s really disgusted with the whole lot, I can imagine her flinging her bouquet in the dirt!

The moral of this fairy tale is that you the photographer must also be the director and the editor. Be sure the final image sends the message you intended. All your skills in exposure, lighting and editing are just the stepping stones; meaning comes from how you pose and relate your subjects to each other. If you do it right, all the elements together will add up to more than the sum of the parts.