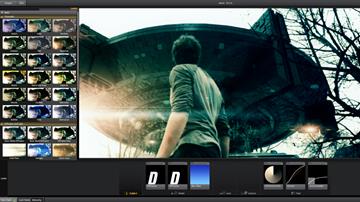 “It might look mostly the same at first glance,” said Nate Sparks, Red Giant Color Suite product manager, “but what’s under the hood is brand-spanking entirely new. Magic Bullet Looks has been around for a long time, and we know how much users depend on it every day in their work. But we reached a point in development where the older technology it was built on was holding us back.”

Rather than continuing to build Looks on old code, the developers chose to spend the last year rebuilding it entirely from scratch – preserving the hugely popular Magic Bullet Looks experience while giving it new life and a bright future.

“A few weeks ago, we announced an entirely new development platform and effects library called Universe,” said Red Giant co-founder Andrew Little. “That technology allows us to quickly create new effects and update existing ones quickly. Magic Bullet Looks has been rebuilt on the same flexible, GPU-enhanced technology, and it opens the door for us to do a lot more with Looks and other existing products in the future.“

In the meantime, you don’t have to wait to get new features out of Magic Bullet Looks. The free update includes the following enhancements:

About Red Giant
Red Giant is a software company made up of talented artists and technologists who work together to create unique tools for filmmakers, editors, VFX artists, and motion designers. As a company, our culture is focused on finding balance between work and life – we call it “the double bottom line” – and it has helped us create our philosophy of ignoring complexity in favor of building simple tools that yield giant results in less time. Over the last decade or so, our products (like Magic Bullet and Trapcode) have become the standard in film and broadcast post-production. It’s nearly impossible to watch 20 minutes of TV without seeing our software in use. Red Giant tools are built from our own continuing experiences as artists in the field. We believe in providing not only tools for artists, but inspiration for them in the form of award winning short films and free training. Learn more about us at www.redgiant.com.