A look at Lytro and some of the technical limitations of how it works. 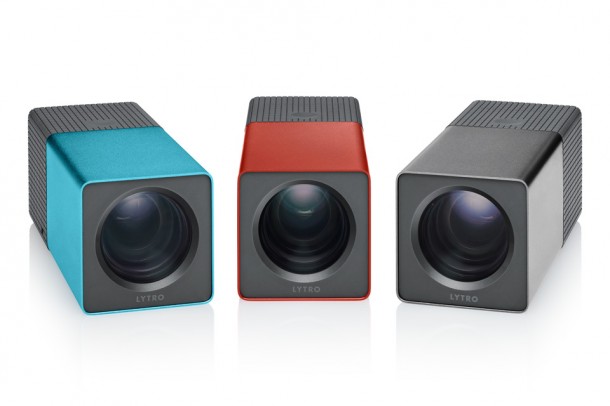 The wraps were removed from the first consumer model at this week's press event and underneath was a camera with an unfamiliar form factor. The rectangular brushed aluminium chassis features a 35-280mm f2.0 zoom lens and small 1.46″ touchscreen on the rear end. Only three user controls are available on the camera, a shutter, power button and a zoom switch. The company seems to have taken a leaf out of Apples book both in the physical minimalistic design and the use of the touchscreen on the back which responds quickly to users swiping across it for navigation of images. It seems somewhat fitting that a camera based on entirely new technology should hold almost no design references to the film camera.

Lytro introduced their light field technology some months back and at the time I refrained from commenting on it because it was not then clear whether it would morph into a physical product. Understandably cagy about their technology, it wasn't even possible to determine initially whether this was a hardware technology or simply some clever software wizardry being performed on images with a deep depth of field. Whether they originally intended to simply license the technology to the third party is also not clear. Some people have been quick to pass off the minimalist design of the physical camera as proof that Lytro themselves never intended to design and manufacture the camera themselves. I personally do not hold that opinion though, I think a new type of camera needs a new base design to start from and whether they did or didn't want to design it themselves, from a design point of view I like it. 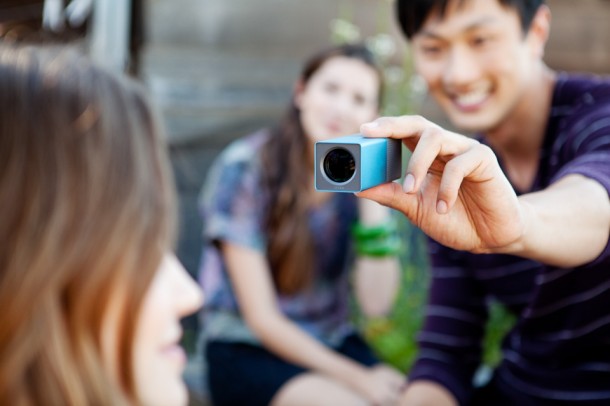 Lytro makes what they call Living Pictures, a rather silly marketing name which one might imagine has something to do with video…. In fact what they are producing is an image which you can shoot now and focus later. By touching an area of the image on the camera's screen, or an area when the image is displayed on your computer you can select the focal point long after the photo was actually taken. Anytime after in fact, all you need is the 'Light Field Engine' which actually comes packaged to every image which is output from the camera. Below are two such examples. Click anywhere on the image to re-focus to that point. Double click to zoom in. Unfortunately double clicking and zooming in will demonstrate the current lack of quality in the images though. Oddly this doesn't seem to have been mentioned in many places, perhaps they are being given the benefit of the doubt because it's a new product? Frankly though the quality is beyond poor but the concept is interesting.

The shoot now, think later (about focus) mentality that it promotes is not going to be everyone's cup of tea and this first attempt at a consumer product is clearly aimed at the consumer, but is this going to be a technology that we begin to see filter into more capable products ? I say capable because from studying some samples it seems that in it's current form the images from the Lytro camera leave quite a lot to be desired. Modern cell phone cameras even have the edge when it comes to sharpness and it would seem also on resolution. Lytro are not saying exactly what the resolution of the images is going to be, and that clearly means that it is small, probably very small. For the initial launch they didn't want people latching onto this fact so they have skirted round the issue in every press encounter that I have read about. Instead they want people to talk about the 11 Megaray sensor 'capturing 11 million rays of light simultaneously'. Groan. What happens if this starts a megaray war ? Sounds dangerous ! Educated guesses have the actual resolution at anything between 2MP and 4MP though. But does the resolution matter so much if this is an image designed for digital consumption anyway? A 2MP image can still fill most peoples computer screen… That's a nice thought but with the current quality I certainly don't want to be filling my screen with the quality of images it's producing.

Some more quick facts about the actual camera

So how does it work ? 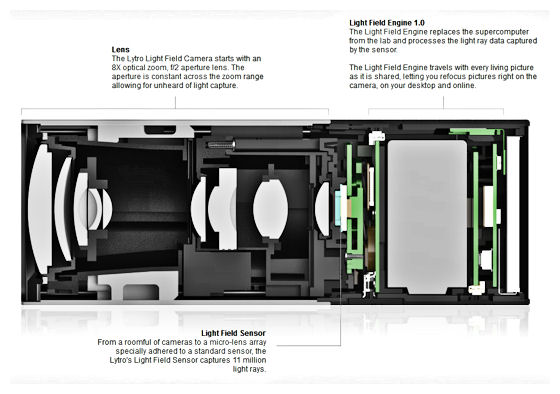 The light field is a core concept in imaging science, representing fundamentally more powerful data than in regular photographs. The light field fully defines how a scene appears. It is the amount of light traveling in every direction through every point in space. Conventional cameras cannot record the light field.

The information on the Lytro website doesn't do a great job of explaining the technology which appears to be fairly complex, or should I say different to what we are used to so I'm going to attempt to explain what I have understood about it from the research that I have done.

Essentially the light field sensor is an array of micro lenses positioned in front of a sensor. Whereas a 'regular' camera only captures the frequency and intensities of light falling directly on a sensor, the Lytro's micro lenses allow the sensor to simultaneously capture the direction that the light is coming from as well. Once you know the direction, frequency and intensity that the light came from you can in theory re-create a scene where the camera is aware of the relative distances of objects in the scene from the camera. At this point you can then digitally extrapolate that data to 'imagine' if the sensor was closer to the micro lenses or further away (mimicking re-focusing).

Think of it like this, normally we focus a lens so that the rays of light corresponding to a particular object in our image focus onto single pixels on a sensor. At this point we have made our choice as to what is in focus. The micro lenses on the Lytro do not move though but knowing the angle of the light that hits the sensor, the software can figure out at what distance from the lens the sensor should have been to be in focus for a particular object. It can figure this out across the entire image and therefore synthesize an image focused on any point you pick on the screen.

The technology has some limitations though that in the short term might hold it back. The key variable is the distance between the micro lens array and the sensor. The sharpness of the image is dependent on the focus of the micro lenses being on the aperture plane of the main lens element at the front of the camera. Whilst the main lens element does move through zooming , it's relative position to the tiny size of the micro lens sees very little change and essentially remains still in focus so long as the micro lens does not move relative to the image sensor which, relatively would be a much larger focus change. This means that currently you have to fix the micro lens array at a set distance from the sensor. If you move the array too far from the sensor then the light that they transmit from each micro lens to the sensor starts to encroach on the light from the neighboring lens when it hits the sensor. They begin to blend together which is not good at all, so the distance from micro lens to sensor must be a fixed property.

The limiting resolution factor comes from diffraction though. To increase the resolution of such an image would require many more micro lenses to go with the many more pixels on the sensor. If you are not increasing the physical size of the sensor, just the pixel count, then it follows that these micro lenses must be made many many times smaller in order to fit above the same size sensor. Once the micro lenses are made small enough, diffraction properties of light waves begin to take over and the quality of the image will turn (even more) to mush. Just like when you stop down a lens to f32, that tiny aperture causes diffraction and a loss of detail. The same is true for micro lenses. Remember, we can't just move the micro lens array further from the sensor to give us a larger array, that distance is fixed due to the previous necessity that I mentioned. Essentially what this means is that the lower the resolution of the image, the better the refocusing power. This is why we are seeing the output of the Lytro is so small and that is what is going to hold it back from inclusion into more mainstream cameras in the near future.