Sometimes all it takes to make a beautiful picture is placing one light–as long as it’s the proper light source. This still photo shows an example of one style of soft lighting that’s been in use for centuries, and for good reason: it works.

There are few things more elegant than lighting a shot with a single light source. It doesn’t always work, but when it does–it’s magical.

The most natural and common source of interior lighting is window light. A number of famous European painters fashioned their studios so that the room was lit by a single window facing north as they’d be guaranteed only indirect soft light from clouds or sky all day long.

This look is fairly easy to replicate. This still, taken of an acquaintance who is an avid biker, is lit by a single strobe through a 6’x6′ piece of grid cloth fabric outside the right edge of frame. I don’t remember exactly how far away it was but probably between 6′ and 8′. 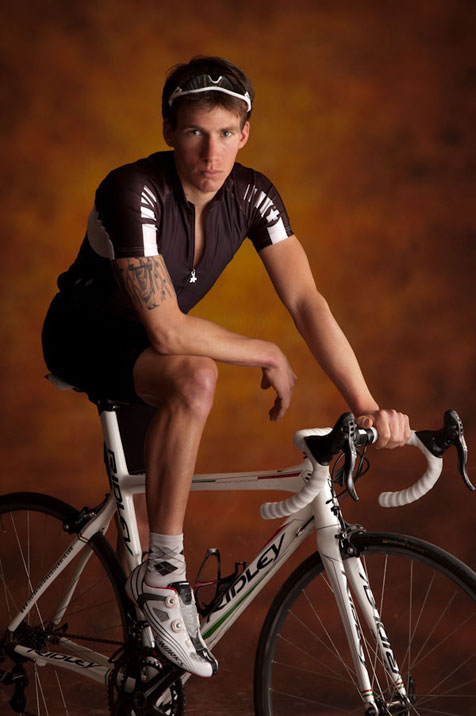 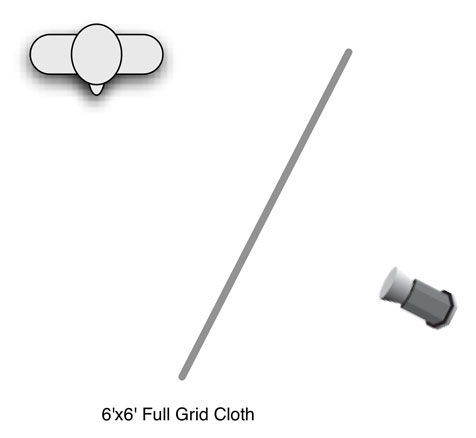 I chose grid cloth because it is a dense material that allows very little of the light’s beam through. That means that the glowing diffusion material becomes the light source instead of the light itself, which emulates the feel of indirect light coming through a window. Imagine looking out a 6’x6′ window at a cloudy sky: the light coming through that window is similar to what I created with grid cloth. The biggest difference is that the clouds are a lot farther away, so light from the 6’x6′ grid source will drop off a lot more quickly as it is much closer. (For more about that see The Inverse Square Law.)

Faces look great when lit with diffuse light, but the bike looks quite nice as well. It helps that the light source is coming from the side and the bike contains a number of vertical cylinders whose roundness is revealed by soft sidelight. Part of that is due to the right side of the cylinders receiving all of the light from the source while the surface curving away from the light receives less and less light, but there’s also a reflection component: shiny vertical objects lit from the side reflect the light source in their surface. Not only do we get the soft rolloff from the large source but we also get a shiny sparkly highlight, which adds contrast and interest. This highlight can be best seen on the post under the bike seat.

Note also the beautiful highlight on the black brake handles.

This gentle roll-off of the light gives shape to an otherwise two dimensional image. We can sense the roundness of his face and arms even though we’re looking at this on a flat monitor. That’s one reason students are often told that frontal light is death: it doesn’t create this added dimensionality as all of the shadows fall away from the camera where they can’t be seen. Still, there are ways to light flatly and still create a sense of depth. (I don’t have an example handy now so I’ll have to dig through my archives for another article.)

I find that a lot of students are confused as to when a backlight is useful and when it isn’t. Ultimately it’s a matter of taste: you can backlight anything you want at any time if that’s a look you like. Whether you NEED to backlight, though, is a different question. Backlighting came about in the old black-and-white film days, when it was common for a person with brown hair to blend into a red background wall. In black and white the object colors don’t make a difference, and brown hair and a red wall that stand apart in color may end up being exactly the same tone when the color is removed. Adding a backlight creates a highlight in the hair so that it becomes a bright object against a dark background instead of a dark object against a dark background. 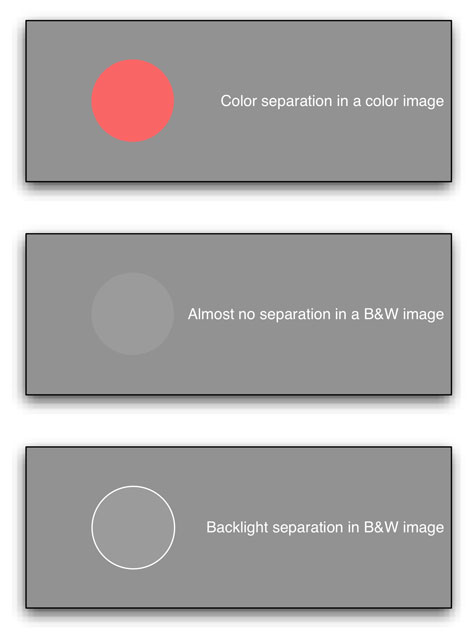 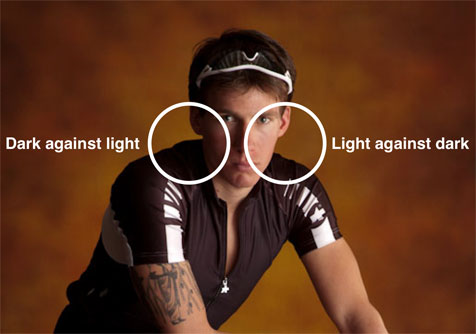 In this case the background helped a lot. It’s a muslin backdrop with painted brown texture overall and a reddish gold patch in the center. As this background creates a highlight behind the subject and drops off in a natural vignette there’s no need for me to focus attention toward the subject with additional lighting. This entire shot was lit with one light source.

The first things I look at when I walk onto a set are where the light sources are and what the walls look like. A wall that’s darker than flesh tone and/or a different color will make my life a lot easier as I can light softly and not worry about spill light on the background. If the walls are light or flesh colored my job becomes a lot more difficult as I have to work harder to make the person the brightest thing in the shot and keep light off the background. (Our eyes tend to look at the brightest objects in a shot first.)

A richly-colored and textured background makes lighting easier. Light spilled on the background brings out textures, and as the eye loves texture we can worry less about shaping the light so that it only falls in one spot. If the background is a different color and tone from the foreground subjects then we have instant separation… unless we’re shooting in black and white.

One last trick: when I place a soft source like this I’ll walk around to the point where, if I was a light, I’d be casting a shadow in the direction that I feel is appropriate for the shot. In this case I concentrated on the placement and quality of the nose shadow, so I walked around until I saw the subject’s nose block the area upon which I wanted the shadow to fall, while also seeing the subject’s far eye, and then put the left edge of the soft source in that position. 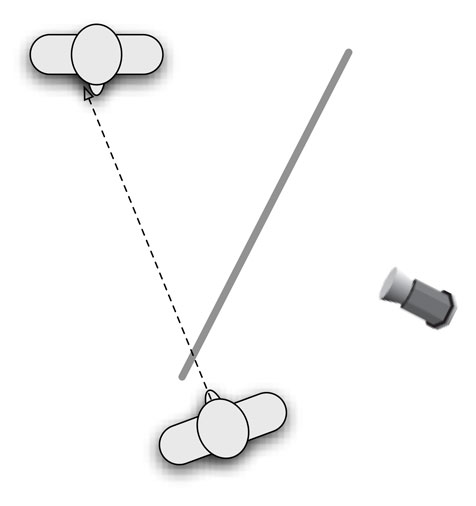 Art Adams is a DP who shoots stills for fun when he’s not shooting moving images for profit. His website is at www.artadamsdp.com.