One System for VTR and Dailies Review 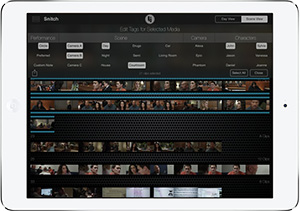 “We reimagined Live Play and rebuilt it based on feedback from our television and feature film customers,” says CEO Michael Cioni. “The new app meets the need for a seamlessly integrated system for both on-set review and cloud distribution of colored and synced dailies. Live Play 3 isalso designed to be a creative asset management platform, empowering customers to maintain a centralized resource of media during the entire production and post process.”

As shown in a preview video just released by Light Iron, the design of Live Play 3 features ultra-fast navigation through a media pool of thumbnail frame grabs. Users can easily choose among automatically-tagged scenes and shoot days, quickly filtering thousands of clips to find specific media. An active tagging feature applies metadata tags to multiple clips at a time, enabling search by an unlimited number of fields including circle, camera, actor, and location, as well as custom tags. Live Play 3 also relies on 256bit TLS encryption, so released dailies and associated metadata are stored securely in a cloud-based hub that can be accessed by the production team, editorial, VFX, and other creative collaborators.

An additional unique feature is that Live Play 3 enables real-time streaming of camera feeds from remotelocations. “With Live Play 3’s unique live stream cloud architecture, we can empower directors with a new creative tool – the ability to collaborate with other production units in real time,” adds Cioni.

Cioni notes, “The advent of digital technologies and workflows has caused the market to become very fragmented. Multiple vendors each supporting a specific component of the pipeline—without understanding their impact on others downstream—may lead to a breakdown in the workflow. With the addition of Live Play 3, Light Iron is uniquely positioned to offer the community a vertically integrated system for creating, managing, and delivering creative assets from the set through final delivery. Our popular OUTPOST system for on-set dailies creation, the new Live Play 3, and our digital intermediate services work in tandem to enhance collaboration and ensure efficiency throughout the entire creative process.”

Pricing for Live Play 3 will be offered in tiers based on data usage and whether productions want just set review or set review and cloud dailies. A beta testing period begins this summer, with live demonstrations being offered at this week’s Cine Gear Expo at Paramount Studios, booth S220.


About Light Iron
Light Iron is a post production company that specializes in on-site dailies, digital intermediate, archival, and data services for projects originated on file-based motion cameras. With facilities in Hollywood and New York City, Light Iron serves feature film, episodic television, and web projects at both the independent and studio level. The company distinguishes itself by providing clients post production workflows that minimize time, maximize image fidelity, and increase creative control. Recent credits include features such as Muppets Most Wanted, Cold in July and Ride Along, commercial campaigns for Nike and Purina, and the television hits Criminal Minds and Veep.