Unfortunately, many of the latest-generation HDTV sets sold in the USA are segregated, but we can liberate them partially… 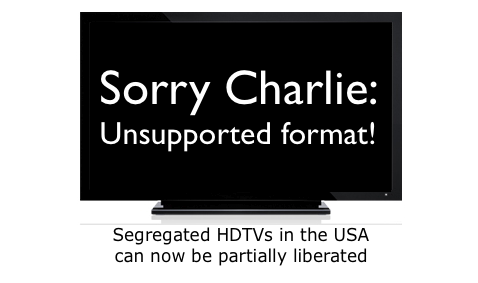 Unfortunately, many of the latest-generation HDTV sets sold in the USA are segregated, meaning that they cruelly block 50Hz signals on their video input. In some cases, they simply show no picture, while in others, they put up an unfriendly message stating: “Unsupported format”. However, as I explained in my recent comparative article on HD players, both AppleTV and WDTV fortunately liberate these segregated HDTV sets so that they can play 50Hz material (25p, 50p, or 50i) with no problem, along with ±60Hz material. My comment here regarding segregated HDTV sets refers to distribution, since for professional production and post-production, I highly recommend the use of professional HD monitors. So far, all of the professional HD monitors I have used personally or have researched are all free of segregation nonsense and play all desired signals.

There was a time when analog TV sets were segregated for natural manufacturing reasons. PAL TV sets required one of different types of PAL tuners (PAL-B, G, H, I, M, N, etc.), and NTSC TV sets needed theirs. Even when receiving composite video or Y/C (“S-video”) as opposed to RF, the analog decoder was different to decode the ±3.58 MHz NTSC subcarrier, as opposed to the ±4.43 MHz PAL version. At that time, there was a legitimate market for “multi-standard” TV sets at a premium price. However, in the age of HDTV sets where all local signals arrive in component digital on HDMI, and all sets have built-in scalers, there is no excuse. They are doing it on purpose, in attempt to prevent grey market sales of inexpensive HDTVs sold in ±60Hz countries, to 50Hz countries! I would have hoped that it would be enough just to include a different DTV tuner (ATSC, DVB, or DiBEG/ISDB-T), but the manufacturers must have noticed the fact that many people don’t use the inboard tuner anyway, instead using a cable box, satellite receiver, or TiVo HD box with CableCard as a tuner. Interestingly, the HDTV sets sold in 50Hz countries accept both 50Hz and ±60Hz signals with no problem, although at a higher price.


It is not always easy to determine (without actually testing) whether a consumer HDTV set is segregated or not, since it’s not a detail normally mentioned in the marketing materials. However, based upon a recent test at a local department store, I see that the percentage of segregated HDTV sets is much higher now than it was two years ago.

How AppleTV and WDTV liberate the segregated monitors
?AppleTV and WDTV both have a built-in scaler which optimizes the output. The scaler can put out the ideal signal for the connected monitor, whether the monitor’s native resolution is closer to 720p or to 1080. In addition, the scaler can put out either 50Hz or ±60Hz. This should happen automatically via HDMI negotiation. However, when it doesn’t, you can simply go to the setup menu of the AppleTV or WDTV and set it. Once you do, the player will deliver whatever file you choose properly on the monitor, no matter whether the file is standard definition, 720HD or 1080HD (WDTV only)… and it will do so at the ideal frequency for the HDTV set, regardless of the framerate of the file. Unlike professional HD cameras with 50Hz/±60Hz settings, which often require re-booting the camera before changing modes, the AppleTV and WDTV require no rebooting when you select a different type of file. You can alternate 50Hz and ±60Hz clips and it just works!

This article originally appeared on the Web Video & Beyond channel. Click here to see the original comments on it.